“I HAPPEN TO THINK IT HAS AN IMPACT”

(Jul. 28, 2020) — At Tuesday’s coronavirus briefing, President Trump announced that under the Defense Production Act (DPA), Kodak will begin to manufacture pharmaceutical ingredients “needed to make generic drugs in the USA.”

As he has since their resumption last week, Trump appeared solo at the late-afternoon presser and spoke for approximately 20 minutes before taking reporters’ questions.

He termed Kodak’s turn to pharmaceutical-ingredient production from photography “a big deal.”

Particularly since the domestic coronavirus outbreak, Trump has stressed that he believes it very important that drug manufacturing return to the U.S. from China and India.  The vast majority of U.S. drugs, including antibiotics, are currently manufactured in China.  He emphasized that COVID-19 originated there and that he believes it should have contained it, avoiding its spread to the United States.

Pfizer is entering the third stage of a clinical trial of a vaccine, Trump said.

As he did on Monday, he recounted the millions of medical gowns, masks, gloves and other personal protective equipment (PPE) which FEMA has distributed to various hospitals around the country since March.

Trump urged Americans to avoid large gatherings, to wear a mask when in close proximity to others, and to practice rigorous hygiene.

As for the economy, the president said that “jobs” and the stock market are improving, with the latter almost to the level it was when the virus hit, sending stocks tumbling.

One reporter’s question focused on hydroxychloroquine and Trump’s perception of it as a possible therapeutic for coronavirus.  “I think it’s become very political…as you know, I took it for a 14-day period…I happen to think it works in the early stages,” he responded, after stating that some doctors believe it to be effective against COVID-19 and others disagree.

“I’ve read a lot about hydroxy…I happen to think it has an impact,” he said, citing the Ford study which found that its use reduced death rates of hospitalized patients.  He then referenced the America’s Frontline Doctors video which Facebook removed on Monday wherein a number of physicians said hydroxychloroquine is an effective treatment and that Americans have been misled about COVID-19.

[Editor’s Note:  Vimeo also appears to have censored the video.] 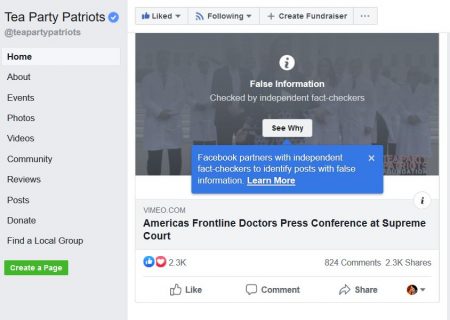 Trump additionally remarked that hydroxychloroquine was discredited “because I recommended it.”