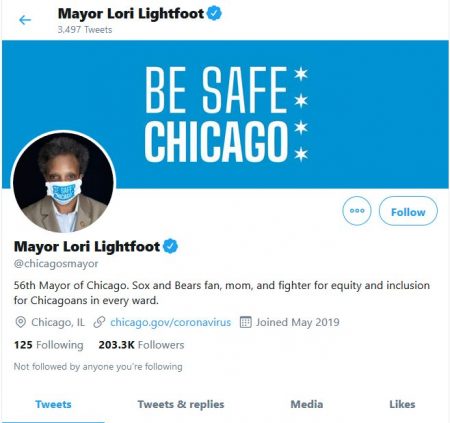 McEnany termed Lightfoot “the derelict mayor of Chicago” while addressing what the White House sees as a significant problem in U.S. cities (9:40) since riots erupted after the May 25 death of George Floyd in Minneapolis.

On Wednesday, Trump announced from the White House that his administration plans to take action to quell rising violence in a number of major cities.  Calling them “war zones,” Trump indicated the federal government will offer “help” to “left-wing” politicians who have failed to restore order in their jurisdictions.

Lightfoot was elected mayor of Chicago in November 2018, succeeding former Obama Chief of Staff Rahm Emanuel, who served two terms as the city’s mayor.  Violence in the “Windy City” has risen steadily over the last several decades, as has political corruption, according to a Chicago-based report.

Lightfoot’s Twitter profile features a “Be Safe Chicago” masthead.  Whether that applies to the coronavirus outbreak or other types of safety precautions is unclear.

On Tuesday, Lightfoot attributed the violence in Chicago to “too many illegal guns on our street” which she said come in from “lax” states such as Indiana and “a lack of federal leadership” in advocating for more restrictions on firearms.  In an interview with MSNBC’s Andrea Mitchell, Lightfoot claimed that Trump has unfairly cast aspersions at her city.

Her comments came after Trump said at a Monday White House meeting supportive of law enforcement that between 20 and 22 people were killed in Chicago over the weekend.  “I hate to say it: That’s worse than any war zone that we’re in, by a lot,” Trump said to those in attendance. “It makes them look like tame places by comparison. So we’re not going to let it go on.”

Present that day were Vice President Mike Pence, Attorney General William Barr and a number of Americans whose lives were impacted positively by police officers’ actions.

Further, Trump said, his administration asked Lightfoot, “Would you like us to go in and help?” but that “they don’t want to say anything.”

According to MSN, Trump sent the letter to not only the mayor, but also to Illinois Gov. J.B. Pritzker (D) in late June in which he termed Chicago a “great American city.”

“Violence and death, which are disproportionately harming young African Americans, are tragic and unacceptable, particularly on such a shocking scale,” Trump wrote in his June 26 letter. “According to the Chicago Sun Times, “shootings across the City increased by 71 percent last month,” and just this past weekend 102 people were shot in the city’s most violent weekend of the year.  A 3-year old toddler was killed.  More Americans have been killed in Chicago than in combat zones of Afghanistan and Iraq combined since September 11, 2001, a deadly trend that has continued under your tenure.”

The letter concluded with:

Unlike previous Administrations of both parties, I am willing to tackle unsolved challenges. If you are willing to put partisanship aside, we can revitalize distressed neighborhoods in Chicago, together. But to succeed, you must establish law and order. The combination of crime, high State and local taxes, and onerous State and local government regulations have caused thousands of Illinoisans to flee to other States. Between 2010 and 2019, Illinois lost more of its population than any other state in the Nation. If you are interested, I am willing to ask members of my Cabinet to meet with you and help devise a plan to make Chicago safe, since a successful formula has escaped both you and your predecessors. My Administration would also welcome the opportunity to engage with you and your colleagues as you develop bipartisan policy recommendations to improve policing and make our great cities safer for all.

Unfortunately, you continue to put your own political interests ahead of the lives, safety, and fortunes of your own citizens. The people of Chicago deserve better.

According to a Chicago-based study reported by Fox News in February 2019, the city is “Number 1 in the ranking of most corrupt big cities in the nation.”

A subsequent report states that “Chicago continues to be the most corrupt city in the country.  And Illinois — where four of the last 10 governors and 35 Chicago aldermen have served prison sentences — remains the nation’s third most corrupt state.”

Wikipedia reports that “Politics in Chicago through most of the 20th century was dominated by the Democratic Party. Organized crime and corruption were persistent concerns in the city.”

One Response to "Press Secretary: Trump Told Chicago Mayor to “Control Her City”"