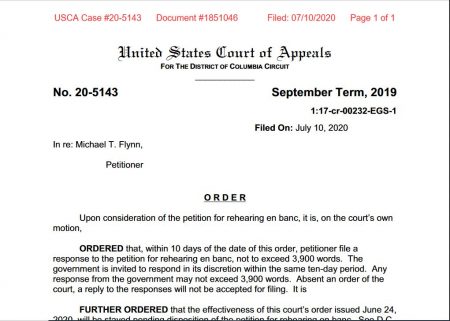 (Jul. 11, 2020) — On Thursday, attorneys for U.S. District Court Judge Emmet G. Sullivan asked the U.S. Court of Appeals for the DC Circuit for an en banc hearing on its three-member panel’s majority decision to grant a Writ of Mandamus in the case against Lt. Gen. Michael T. Flynn (Ret).

The June 24 2-1 decision instructed Sullivan to grant the Justice Department’s motion of May 7, 2020 to withdraw the charge against Flynn in a case which was ongoing for nearly three years and continues to yield new information.

Sullivan presided over the Justice Department’s prosecution of Flynn, conducted on the recommendation of Special Counsel Robert Mueller’s prosecutorial team.  Flynn served as President Trump’s first national-security adviser and in December 2017 entered a “guilty” plea on one count of lying to the FBI following extensive and ongoing cooperation with Mueller’s probe of alleged “collusion” between the 2016 Trump campaign and Russia.

Although affirming his plea to Sullivan in December 2018, during which Sullivan unexpectedly accused him of “treason,” Flynn’s new counsel, hired the following June, filed a motion in January asking to withdraw the plea.

Instead of granting the government’s motion, Sullivan engaged retired federal judge John Gleeson, now in private practice, to craft an argument contrary to the government’s and to evaluate whether or not Flynn should be prosecuted for “perjury” given his “guilty” pleas and subsequent reversal.

Gleeson had already expressed his opinion of the Flynn case publicly.  Sullivan called for amicus curiae briefs to be submitted and scheduled a hearing for July 16 which was canceled after the appellate panel’s opinion was released.

In response to Sullivan’s Thursday motion for rehearing, on Friday the court ordered Flynn’s counsel to file a reply to Sullivan’s petition within ten days.  “The government is invited to respond in its discretion within the same ten-day period,” the order continued, specifying that neither party’s brief was to exceed 3,900 words.

The court additionally placed a stay on the majority panel’s granting of the Mandamus “pending disposition of the petition for rehearing en banc.”  As of this writing, Flynn’s lead attorney, Sidney Powell, has not issued an update on the portion of her website dedicated to the Flynn case, which she claims was “concocted” by the government.

Powell has said in numerous interviews as well as in her latest brief that exculpatory information was withheld from her client for “three years” and that his previous counsel was conflicted.  Recently-released documentation from the Justice Department appears to show that FBI agents investigating Flynn in late 2016 and early 2017 did not sense that his responses during a fateful January 24, 2017 West Wing interview were intended to be deceptive and that his phone calls with then-Russian Ambassador to the U.S. Sergey Kislyak were viewed by then-FBI Director James Comey as “legit.”

Evidently prior to the court’s newest order of the same day, Powell filed a “Second Supplement in Support of Agreed Dismissal” with Sullivan’s court.  The brief begins, “On May 7, 2020, the Government moved to dismiss the Information against General Flynn after shocking exculpatory evidence was revealed by U.S. Attorney Jeffrey Jensen’s review of the Flynn file. ECF No. 198. General Flynn consented to that motion. ECF No. 199. Although this Court has terminated briefing and hearing deadlines, the case is still pending as this court has not yet entered the order dismissing the case on the Government’s motion…”

On pages 1-2, Powell wrote, “On July 7, 2020, the Government produced to General Flynn 14-pages of additional evidence, demonstrating (i) his innocence; (ii) the absence of any crime; (iii) government misconduct in the investigation of General Flynn; and (iv) prosecutorial misconduct in the suppression of evidence favorable to the defense in violation of Brady v. Maryland, 373 U.S. 83 (1963) and this Court’s Brady order.  These documents both corroborate information provided by others previously and provide new information known to at least ten people at the highest levels of the Department of Justice and the FBI. This evidence negates multiple essential elements required for the prosecution of a false statement offense.”

In the following paragraph, Powell accused Mueller and the Justice Department of having been aware of the exculpatory evidence but nevertheless pursuing Flynn’s prosecution.  As she has previously, Powell asserted that former Deputy Assistant Director of Counterintelligence Peter Strzok and former FBI attorney Lisa Page “altered the FBI 302 report of the interview until it met with [then-FBI Deputy Director Andrew] McCabe’s approval and would facilitate a prosecution by the Special Counsel.”

In its Friday order, the appellate court referenced “D.C. Cir. Rule 41(a)(3)” by which the panel’s order will be suspended pending further proceedings.  However, the court added, “(order granting writ becomes effective automatically 21 days after issuance in the absence of an order or other special direction of this court to the contrary.)”

2 Responses to "What is Next in the Flynn Case?"