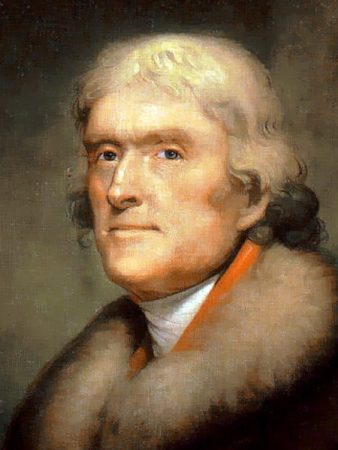 (Jul. 1, 2020) — Our founding fathers established this nation to be based on the teachings of Jesus Christ, despite what the satanic left is saying today.  The “wall of separation” so rabidly pursued by the left is not in the Constitution anywhere.  The left has perverted the “establishment clause” of the First Amendment to mean exactly the opposite of what it was written to mean.  The term came from a letter written by President Thomas Jefferson to the Danbury, Connecticut Baptist Association in 1802.  They had written Jefferson about the state of Connecticut giving tax money to the Congregational Church, which was the preferred denomination of those in charge of the state at that time.  The Baptists wanted to share in any state tax funds given to churches and Jefferson wrote that the state could not support one Christian denomination to the detriment of the others, thereby creating a “wall of separation between church and state.”

The Supreme Court, in 1947, decided from that letter that Christians could not have any voice in government, a total distortion of the intent of the letter.  They took eight words out of a two-page personal letter and perverted them into an excuse to turn the First Amendment around from what it actually said.  Our founders, despite what the leftist liars claim, established this nation based on the principles laid out in the Holy Bible and quotes from their speeches and writings bear this out.  As usual, leftists have no interest in accepting facts; all they are interested in is imposing their  satanic “feelings” on everyone.

Benjamin Franklin and Thomas Jefferson, two of our founding fathers, became the head of the American Bible Society.  Benjamin Franklin even stated that the Continental Congress should begin every session with prayer.  The idea that our founders were against Christianity is a total lie created by satan and parroted by his minions to destroy the nation that God established.  Atheists have gained control of most of government because Christians have let themselves be intimidated into submission to satanism.  If We the People are not willing to stand up for what we believe, if we don’t have the courage of our convictions, then the nation will continue down the road to oblivion.

Today’s Christians in America are being marginalized and stigmatized by the satanic left.  We are not yet physically persecuted as some in the world are.  Christians in communist countries are put in prison and tortured.  Christians in moslem countries are beheaded.  The coronavirus is no more dangerous than the common flu but leftist politicians and their media propagandists have blown this minor thing out of proportion to instill fear in We the People and to get us to submit to tyranny.  Sadly, many Christians are falling into line so as to avoid the wrath of government.

We are, I believe, in the End Days as foretold in the Holy Bible.  Real persecution is rapidly approaching America’s Christian population.  The catholic and methodist churches have embraced homosexuality and political correctness, in order to be accepted by the satanic left.  Abortion and sex outside of marriage are two evils widely accepted by Christians, sins that are based in satanic political correctness.  I know the things I write here will again get me accused of being “intolerant,” bigoted,” “unenlightened” and “a hater,” but the opposite is actually the truth.

I write these things because the truth will set you free and the truth of God’s Word can’t be interpreted to suit the whims of evil in men’s hearts.  God has been rejected by our society and the day is coming, very soon I believe, when Almighty God will bring judgment on this nation.  I daily pray that God will soften the hearts of men so they will turn to Him, and that He will either turn the nation’s “leaders” and the media around or remove them from positions of power and influence.  I daily ask Him to give us true leaders, people who will lead the nation back to honoring and following God.

Since the 1947 Supreme Court decision we have seen one decision after another that perverts the Constitution and moves the nation farther from God.  I believe it was in 2012 that delegates at the democrat convention booed God.  A motion was made to remove any reference to God from the party platform, and a voice vote was taken.  When the decision was that it failed a chorus of boos rang out that showed the evil that resides within the democrat party.  This same evil brought Adolph Hitler to power in Germany in 1933 and led to tens of millions of deaths in the world, including the systematic extermination of more than 6 million Jews, people ostracized and marginalized as Christians are in America today.

I see America in the same mindset as Germany in 1934 and rapidly escalating to the physical persecution of Christians.  Just a few weeks ago joe biden said Christians should be designated as domestic terrorists because we won’t accept abortion and homosexuality as the “rights” of people that stand above the beliefs of our faith.  Christians who stand up for their faith and God’s Word are now seen to be “enemies of the state,” people who need to be eradicated from the nation.

I urge all Christians to honor Almighty God by refusing to accept the political correctness of the left and stand strong in the faith, even if it means prison or execution.  I will proudly stand on God’s Word and will not bow to the demands of the minions of satan.  Jesus said, “To lose your life for My sake is to save it,” and I will stick with Jesus.  Those who can’t stand against satanic pressure now certainly won’t be able to stand against the pressure when it ramps up to actual physical persecution.

I lived much of my life deep in sin but since God drew me to Him I have steadily grown stronger by immersing myself in His Word, praying, and serving Him to the best of my ability.  I believe the stroke I suffered on August 19, 2014 was an attempt by satan to drive me away from God and back into his camp but has had the opposite effect, moving me closer to God and making me a voice for Jesus Christ.  I am very humbled and honored that God is willing to let me repent from so many years of rebellion and to now be part of His effort to turn this nation back to him.  I am very limited because of my physical disabilities and limited finances as well as social network platforms removing me due to my views, which inhibits my reach, but I am doing the best I can to be a voice for and an example of Jesus Christ.  This, along with the example of the Apostle Paul in the New Testament, shows that God will accept repentance and use anyone willing to work for Him in this world.

Paul, formerly known as Saul of Tarsus, was a Jewish Pharisee who ardently persecuted early-day Christians, arresting, torturing, and even executing people who followed the teachings of Jesus of Nazareth.  I don’t by any means compare myself to Paul but merely point out that if a person repents, God will forgive his sin and accept him into the flock.  2 Chronicles 7:14 bears this out: “If my people who are called by My name will humble themselves, seek My face, pray, and turn from their wicked ways, I will hear them from heaven and will forgive their sin and heal their land.”  This was originally written to the Jews but now also applies to Christians.  It is up to us to speak out and inform people of  the United States of America in the hope that they will repent and turn to God so the nation can be healed.

America Was Founded as a Christian Nation added on Wednesday, July 1, 2020

2 Responses to "America Was Founded as a Christian Nation"