(Jun. 30, 2020) — At approximately 9:45 a.m. EDT, the Senate HELP (Health, Education, Labor & Pensions) Committee opened a hearing with four federal health officials for an “update” on “Progress Toward Safely Getting Back to Work and Back to School” following the arrival of COVID-19 in the U.S. and its escalation to a pandemic.

Committee Chairman Lamar Alexander (R-TN), who is retiring in January, said in his opening statement that in his view, schoolchildren have suffered significantly from schools having been closed earlier this year.  Alexander addressed questions to all four witnesses on a safe reopening of public schools and higher-level education and how the “flu season” might impact COVID-19 planning.

Alexander decried the politicization of mask-wearing, which the CDC has recommended when social-distancing is not possible but not absolutely mandated.  He also said in previous hearings, the committee has considered ways in which to prepare for “the next pandemic” as well as how to differentiate between the flu and the coronavirus.  He asked the witnesses to describe treatments and possible vaccines which may be on the horizon. 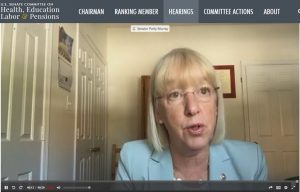 During her opening remarks, ranking committee member Patty Murray (D-WA) decried the approximately 126,000 American lives reportedly lost to COVID-19, recent “record-setting increases” of cases in a number of states and the Trump administration’s “failure on testing,” which she said demonstrate a lack of leadership.  She said she wants a “comprehensive, national vaccine plan” from the administration.  “I hope Republicans will work with me in a bipartisan way” to accomplish that and other objectives, Murray said.

She contended the country remains in crisis from the pandemic and that educators do not have the resources they need to safety reopen schools.

Fauci said that “there is no guarantee” that a vaccine will be available by the end of the year but that one will be entering the second clinical-trial phase next month.

Redfield confirmed that 12 southwestern and southeastern states are seeing increased cases after steady declines earlier in the pandemic.  He particularly singled out Arizona for more recent deaths.  Underlying conditions continue to play a prominent role in the progression of the virus, he said, including Type 2 diabetes, sickle-cell anemia, and kidney disease.

“We are not defenseless with this disease,” Redfield said, and that “the universal use of face coverings” and handwashing can be employed as tools to slow the spread.

In his opening statement, Giroir said he maintains his supervisory role in nationwide testing as part of the White House Coronavirus Task Force.  He said the “mitigation strategy” developed since March can be applied to bringing down the rising numbers of cases and deaths.  “Shield the elderly and the vulnerable of any age,” he said as a suggestion, in addition to “wash your hands” and wearing a face mask in public.

Regarding “schools and businesses,” Giroir said the CDC will be releasing new guidelines for superintendents and university presidents. He said that “testing” should be a “part of your comprehensive plan.”

Hahn said that the drug Remdesivir has shown promise in reducing the duration and severity of the virus.