Americans, Once Defenders of Freedom, Have Turned Into Sniveling Cowards 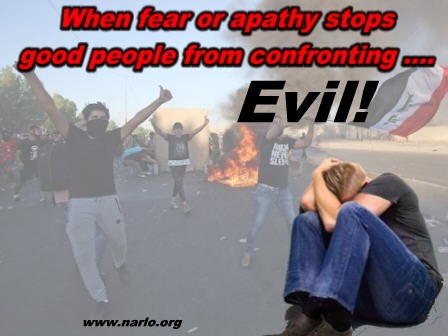 (Jun. 27, 2020) — “The most effective leaders are actually better at guarding against danger when they acknowledge that it exists.  Cowards, in contrast, cling to the hope that failure will never happen and may be sloppy in the face of danger – not because they don’t acknowledge that it exists, but because they are just too afraid of it to look it in the eye.”  — Simon Sinek, contemporary author and speaker

The forces of evil have stripped your land of civility and reason.  Domestic terrorists, with only violence on their minds, have invaded your peaceful tranquility.  They care nothing about you, your property, or your right to live and work in peace.  They laugh at you while you scurry for cover or complain to a government that doesn’t hear you.

You watch as your city burns and you turn away or cower in a corner in fear.  So what if city blocks are torched or anarchists take over, by force, a portion of the place where you live and paint filthy graffiti on sidewalks, streets and buildings?   Your government gives them a pass and tells the police to stand down.

Armed thugs are coming up the walkway to your home.  Your heart is pounding while you call 911.   The person on the other end of the 911 line says, “I’m sorry, we can’t help you at this time.  Our police units are huddled in the north precinct and have been told not to engage the rioters in your area.”

If you have a gun, will you defend your home?  Or will you hide in the cellar behind a locked door in the hope the thugs won’t find you?  What if they rob and then torch your home on their way out the door to find another helpless victim in your neighborhood who won’t fight back?  Will they find you and your family’s remains in the charred debris of your burned-out home?

You are furious when you realize that one political party actually condones the violence, while another party is silent.   It seems those who govern you are afraid of ANTIFA and Black Lives Matter and won’t stand up to them.  They are afraid of being called racists.

Through massive propaganda you are told that America is a racist country, but only whites are racist.  The news media, academia and the politicians echo this falsehood.  Tens of millions of Americans believe the propaganda and feel that they are somehow guilty, especially whites, for the alleged injustice against blacks.

You are told that only whites are inherently racist.  Books like “White Fragility,” written by Robin DiAngelo, are required reading in high schools and colleges. “White Fragility” stereotypes all white people as being racists.  They simply can’t help it.  It’s inbred and genetic….. so a white, educated idiot, DiAngelo, tells us.  But it is interesting to note that according to the book, white people seem to be racist only against people of color.  You know, the ones who are currently looting businesses and burning buildings that government seems to tolerate.  But black people aren’t racists against white people, are they?

And yet white people don’t seem to be as racist against the yellow (Asian race) as they are against the black and brown races.  Why is that?  Because the Asian civilization is almost 5,000 years old and has a very strong, bonded culture, with the nuclear family, education and personal achievement being their highest priorities.

In contrast, the black and brown races are only 200 years out of tribal, hunter-gatherer existence.  Their families are torn to pieces and fractured by government policies that are meant to help them but destroy them instead.  Two-parent families are a rarity.  Young boys use gangs as father figures.  Attempts at educating them in dysfunctional, run-down public schools, where bullies run the classroom, is a cruel joke.  Their inherent cultural differences make it difficult for them to integrate into American society.  They are told they are victims of a racial culture, instituted by whites, and they have no chance for equal justice or equal opportunity.  Whites are told they caused it.  Somehow it is overlooked that a huge percentage of professional sports figures are black and earn millions of dollars in salaries for pushing a dumb ball around a court, a diamond, or a football, or a soccer field.  Should white players loot businesses and burn down buildings because there are way too many black players in the game?

We find that this constant trashing of white people because of the color of their skin has gone way too far and one day there will be a reckoning.   That reckoning will not turn out in favor of the other side. (See: “Yes, White People Built America.”)

Ladies and gentlemen, it is abundantly obvious that your government has no intention of reining in the irrational and wanton violence that has beset our nation over the fraud called inherent racism by white people.   Because government refuses to stop it with force, the violence is condoned and will continue unabated while Americans hide in the shadows.  The fact is, if the government, the police, the U.S. military, the National Guard and the sheriffs won’t stop it, it then is up to the people to stop it, as we used to do in days gone past.  Some Americans are ready to stop it now ….. with force.

A response to one of our recent articles included this comment:

“Americans are seething right now and our Government has no idea how outraged people truly are in this country! I know a lot of veterans have told me that they are preparing for the coming fight! The divide in this country is as big as it was in 1860 with the states hating the Federal Governments meddling in their affairs. My fear is that there will be so much blood shed once this thing starts that it won’t stop until there is outright Civil War.”

It is very likely that tens of thousands of Americans will have had enough and will begin to arm themselves in defense against an armed, ignorant mob whose only goal is to tear down our society and remake it in their own, tortured, tribal image.  This will lead to vigilante justice where the rule of law morphs into the rule of the gun.

How long will it be before squads of armed Americans descend on the rioters and shoot them on sight while they are looting and burning?  These idiots who would tear down your country are bullies, and the only thing they understand is a force greater than theirs.  That force is meeting violence with greater violence.

Think about it!  America has lived through and survived a revolution from which our freedom was born and a civil war that nearly tore us apart. We have taken on the world in two devastating World Wars. We rebuilt Germany and Japan after those wars that cost American taxpayers billions. Our military might and the exceptional bravery of our well-trained men and women in uniform have freed over 1 billion people from slavery and brutality. We are the saviors of the world in natural disasters. We, white, black, brown, yellow and red, are the consumers of the world’s goods, providing jobs and thriving economies in smaller and even larger countries. Our technology and medical discoveries have not only improved our own lot and our lifestyle, but they have saved and improved millions of lives around the globe. American inventors and entrepreneurs have created wealth and living standards unmatched anywhere in the world. We have sent men to the moon, and the “eyes” of our scientific probes explore the Solar System, our galaxy and outer space.

We can defeat this scourge that has replaced intellect, reason, logic and the rule of law with irrational violence.  It does not have to send us to the cellar in abject fear for our lives.  Stand up to it!  Confront it!  You already know that government isn’t going to do it.  You, as an American, are the only ones who can save yourselves.  Because if you don’t, this violent herd of racist insane bullies will own you and you will be but putty in their hands and slaves to their every whim.

This goes for all of the other problems that face Americans today.  We have not confronted illegal immigration, so we are overwhelmed by illegal immigration.  We allowed our government to force ObamaCare upon us and we are now paying the price of huge cost increases and a fractured health care system.  We let government pass environmental laws that repeal constitutional property rights and let wealthy environmental groups collude with government to increase the inflexibility of environmental law.  We let government spend us into national-debt oblivion and say we can do nothing to stop it. We have discovered that representative government is essentially dead, but we do nothing to change it.  We keep electing the same power-hungry dolts who rob us of our freedom.

While we worry about the coronavirus and racial violence taking over our lives, your government has been slowly, over the last 100 years, eliminating your freedoms by ignoring the protections of our Constitution and purposely distorting the rule of law.  Corruption is rampant throughout our politicians and agencies.  Government has become an institution with little restraints.

A government without restraints is a government out of control.  A government out of control is an oligarch monarchy where the oligarchs rule and the people are subjects (servants) of the oligarchs.  The only answer to an oligarch monarchy is a peaceful or violent uprising against the government by the people.  Peaceful attempts to restrain government go on for years with little effect.  It turns out that freedom is usually earned by blood, not obtained by peaceful means.  Freedom is never granted to the people by heads of government who hold the reins of political and military power.

So the question remains: “Are Americans the Defenders of Freedom, Or Sniveling Cowards In The Face of Violence, Corruption and Tyranny?”

Americans, Once Defenders of Freedom, Have Turned Into Sniveling Cowards added on Saturday, June 27, 2020

7 Responses to "Americans, Once Defenders of Freedom, Have Turned Into Sniveling Cowards"