WHATEVER HAPPENED TO “FESTIVE”? 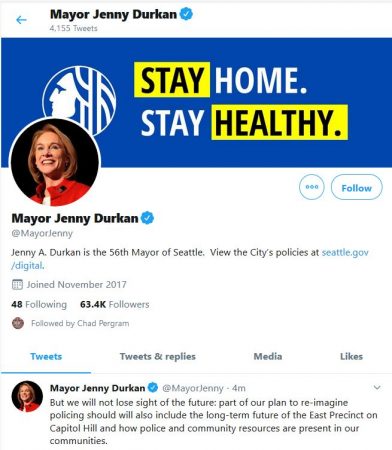 (Jun. 22, 2020) — On his Monday night show, “Hannity” host Sean Hannity announced as breaking news that Seattle Mayor Jenny Durkan, a former U.S. attorney appointed by Barack Obama, has expressed a desire to “wind down” what she called a “summer of love” after extremists claimed control of six blocks within the Capitol Hill district two weeks ago.

Durkan’s reported change of heart comes after one person was killed over the weekend and others injured, one seriously, as police encountered difficulty in reaching those affected.

The “Capitol Hill Autonomous Zone” (CHAZ), as it was first named by the “protesters,” was renamed “CHOP” for “Capitol Hill Occupied Protest.”

In an interview directly following the barricading of the area by those allegedly protesting police brutality following the May 25 death of George Floyd, Durkan appeared to have no objection and mused that the perpetrators might engage in a “summer of love.”

As this story went to press, Durkan tweeted that the city police department “will be peacefully returning to the East Precinct,” citing Police Chief Carmen Best as having told her that “our Police Department will need East Precinct to ensure public safety and appropriately respond to more than 100,000 9-1-1 calls.”

Durkan continues to advise her constituents to “Stay home; stay healthy.”  In consideration of Best’s recent input, Durkan said, “…we will not lose sight of the future: part of our plan to re-imagine policing should will also include the long-term future of the East Precinct on Capitol Hill and how police and community resources are present in our communities.“

Durkan’s comments were made during a Monday press conference wherein she related that she is looking to “de-escalate” the situation by “working with Chief Scoggins, Chief Best, and other City departments…in partnership with Black-led community organizations, demonstrators, small businesses, residents, and trusted messengers.”

“The cumulative impacts of the gatherings and protests and the nighttime atmosphere and violence has led to increasingly difficult circumstances for our businesses and residents,” Durkan said at the presser. “The impacts have increased and the safety has decreased.”

On June 11, Durkan declared “unconstitutional and illegal” President Trump’s suggestion that he could send in the National Guard to dismantle CHAZ.

Some in the mainstream media had first described the atmosphere within the zone as “festive.”