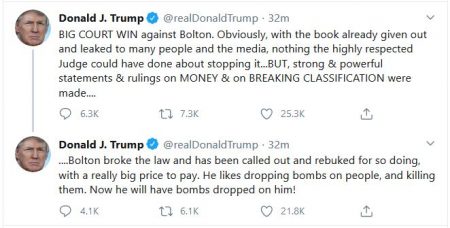 (Jun. 20, 2020) — At approximately 11:45 AM EDT Saturday, President Trump claimed victory after a Friday federal court hearing over whether or not his former national security advisor, John Bolton, should be permitted to distribute his book beginning on Tuesday.

“BIG COURT WIN against Bolton,” Trump tweeted. “Obviously, with the book already given out and leaked to many people and the media, nothing the highly respected Judge could have done about stopping it…BUT, strong & powerful statements & rulings on MONEY & on BREAKING CLASSIFICATION were made……..Bolton broke the law and has been called out and rebuked for so doing, with a really big price to pay. He likes dropping bombs on people, and killing them. Now he will have bombs dropped on him!”

At the same time, most news reports expressed U.S. District Court Judge Royce Lamberth‘s decision not to grant the temporary restraining order (injunction) the administration requested as a “denial” for the Trump White House.

Bolton served as Trump’s national security adviser from late March 2018 to September of last year, with his departure marked by apparent policy disagreements with the president. Last week, the Justice Department filed suit against Bolton for proceeding with publication of the book, claiming that he “breached his legal obligations” in writing it.

But Bolton’s attorney, Charles (Chuck) Cooper, told The Wall Street Journal that his client has the “constitutional right to speak on matters of the utmost import.”

In late January, the Amazon page promoting the book, “The Room Where It Happened: A White House Memoir,” “went live,” Fox News reported, as The New York Times “revealed a bombshell excerpt.”

Originally set to be available on March 17, the book’s public release has been postponed twice over the administration’s claims that it contains classified information amid an ongoing review.

The Amazon page’s preview of the book claims that Trump and others “wooed” Bolton to join the administration, whereas Trump claimed Bolton “was all washed up until I brought him back and gave him a chance.” 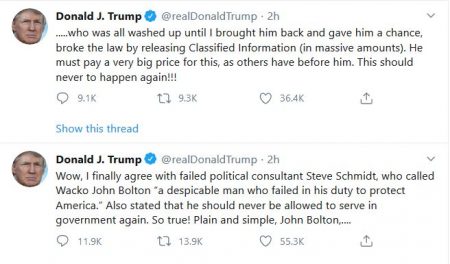 Trump has further claimed that Bolton “broke the law” by going forward with the book.  On Thursday, Secretary of State Michael Pompeo issued a brief press release in which he wrote, “I’ve not read the book, but from the excerpts I’ve seen published, John Bolton is spreading a number of lies, fully-spun half-truths, and outright falsehoods. It is both sad and dangerous that John Bolton’s final public role is that of a traitor who damaged America by violating his sacred trust with its people. To our friends around the world: you know that President Trump’s America is a force for good in the world.”

According to Lamberth’s ten-page opinion, Bolton provided his manuscript to the publisher, Simon & Schuster, prior to the National Security Council and other government agencies having completed their review to identify any classified information (p. 3).  However, Lamberth wrote, the fact that the book has already been made available in the “hundreds of thousands” renders an injunction “unavailing” (p. 8).

Lamberth affirmed that the non-disclosure agreements (NDAs) Bolton signed upon accepting the position precluded him from releasing classified information.  “Bolton likely published classified materials. The government is likely to succeed on the merits. But a single factor is not sufficient for an injunction to issue…” Lamberth wrote on page 7.  He also opined that the government’s lengthy review process is “reasonable” but “intolerable to Bolton,” who he said then “proceeded to publication without so much as an email notifying the government.”

Trump’s tweets Saturday morning reflected Lamberth’s conclusion (p. 10) that “Defendant Bolton has gambled with the national security of the United States. He has exposed his country to harm and himself to civil (and potentially criminal) liability.”

“Judge Lamberth will also oversee the part of the lawsuit that seeks to seize Mr. Bolton’s proceeds for writing the book as a penalty for purportedly breaching the agreements he signed as a condition of receiving classified information to go through the prepublication review process,” The New York Times reported Saturday following the issuance of Lamberth’s decision. “Mr. Cooper has argued that Mr. Bolton lived up to them.”

According to The Hill, Cooper stated in response to the opinion, “We welcome today’s decision by the Court denying the Government’s attempt to suppress Ambassador Bolton’s book. We respectfully take issue, however, with the Court’s preliminary conclusion at this early stage of the case that Ambassador Bolton did not comply fully with his contractual prepublication obligation to the Government, and the case will now proceed to development of the full record on that issue. The full story of these events has yet to be told—but it will be.”

The proceeds are reportedly $2 million in the form of an advance from Simon & Schuster.