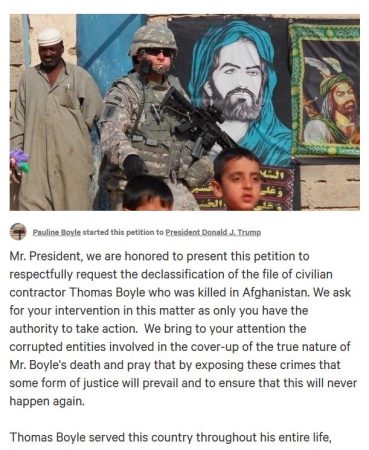 (Jun. 17, 2020) — Mrs. Pauline Boyle, widow of former Chicago police officer and civilian contractor Thomas J. Boyle, has launched a change.org petition asking President Trump to declassify her late husband’s government file so that she might finally learn the cause of his death seven years ago.

At the time, Mr. Boyle was deployed as an employee of Engility, a division of L-3 Communications, to Kandahar Province, Afghanistan with the U.S. Army Reserve 303rd Battalion.  Although publicly stating that Mr. Boyle died as a result of a suicide bomb from the terrorist attack the Forward Operating Base (FOB) suffered that morning, privately Mrs. Boyle was told by eyewitnesses that two poorly-trained Reservists accidentally shot her husband during the attack. Mrs. Boyle believes the two attempted to obscure their error by moving his body.

Since 2016, The Post & Email has related Mrs. Boyle’s quest for answers, most recently when she developed and released a nine-part video series on her husband’s life and death posing questions as to why the majority of his life-insurance policies did not issue “accidental death” benefits on what was reported as “accidental homicide” by another, lone insurance company.

A decorated Vietnam combat veteran and 30-year retired law-enforcement officer, Boyle volunteered for civilian-contractor duty following the 9/11 attacks in New York City, Pennsylvania and Washington, DC. He was deployed to Kosovo twice, Iraq twice and, finally, to Afghanistan, where he died on June 19, 2012.  Also lauded for his last service to the nation he loved, Mr. Boyle was laid to rest in Mrs. Boyle’s family plot in Wisconsin.

The U.S. Department of Defense and U.S. Department of Labor reported Mr. Boyle’s death only in vague terms, with three different death certificates containing as many causes of death issued.  The photos from the DOD’s official autopsy report which Mrs. Boyle eventually obtained did not support the “suicide bomber” explanation, she said, prompting her to commission an independent autopsy.

The results revealed that Mr. Boyle had suffered bullet trajectories which could not have been fired by an insurgent nor occurred as a result of a suicide bomb, Mrs. Boyle reported.

In 2017 and 2018, Mrs. Boyle twice wrote to then-White House Chief of Staff Gen. John Kelly (Ret) to request assistance in obtaining the full story behind her husband’s death but received no response.

“President Donald Trump has the authority to declassify these reports and since you are the gatekeeper, I respectfully request at this time that you forward my request for declassification to our president,” Mrs. Boyle wrote to Kelly in October 2018.

The change.org petition begins, “Mr. President, we are honored to present this petition to respectfully request the declassification of the file of civilian contractor Thomas Boyle who was killed in Afghanistan. We ask for your intervention in this matter as only you have the authority to take action. We bring to your attention the corrupted entities involved in the cover-up of the true nature of Mr. Boyle’s death and pray that by exposing these crimes that some form of justice will prevail and to ensure that this will never happen again.”

Through evidence she has both received and compiled since her husband’s death, Mrs. Boyle has come to believe that in regard to U.S. civilian contractors deployed to war zones, “There are too many needless deaths I cannot ignore.”  She is currently writing a book about her saga which she said is “looking like a 10 volume encyclopedia right now.”

“Much like you, Mr. President, Thomas Boyle was betrayed by bad actors within the military, DOD, defense contracting community, intelligence agencies, and the insurance industry,” the petition further states. “His family was spied upon after his death, personal computers were hacked and movements and communications were monitored albeit illegally. We need you, President Trump, to intercede and provide the family of Thomas Boyle the truth they deserve.”