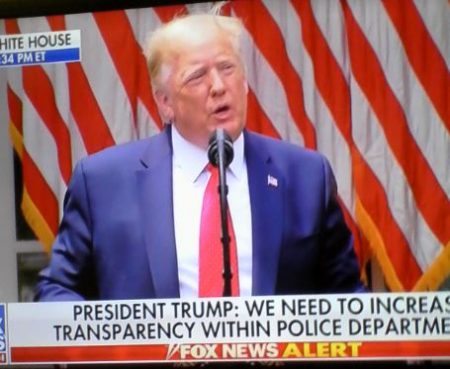 (Jun. 16, 2020) — At Tuesday’s Rose Garden address, President Trump said he had “just come” from meeting with the families of approximately ten Americans killed in police-involved altercations.

He thanked everyone for coming and called the surviving family members “incredible people.”

The killings of George Floyd on May 25 and Rayshard Brooks on Friday set off demonstrations against police brutality and excessive use of force which at times escalated into violence against officers, destruction of public property, and the deaths of innocent bystanders.

After acknowledging a number of law-enforcement attendees and thanking Attorney General William Barr, Trump said the current moment presents an opportunity to bridge divisions while emphasizing the low crime rate achieved over the last few years.

“The vast majority of police officers are selfless and courageous public servants,” he said, who often “run straight toward” danger.  “Many of them never returned,” he said of those officers killed in New York City on 9/11/2001.

“We have to give them great respect for what they do,” he said, invoking the 89 law-enforcers killed last year.

During national emergencies, “Your federal government is willing, ready and able to help,” Trump said, referring to violence which erupted in Minneapolis after Floyd’s death, then adding “Seattle,” no doubt a reference to the “Capitol Hill Autonomous Zone” overtaken by “protesters” declaring the 6+-block area a “cop-free zone.”

Trump said that “in many cases, local law enforcement is underfunded.”  He also said that Americans “want law and order” even if they do not articulate it.

The number of “bad police officers” is “tiny,” Trump maintained.  “Nobody wants to get rid of them more than the overwhelmingly good and great police officers.”

He said law enforcement and Americans “need to come together,” not be driven farther apart.

The executive order will ban “chokeholds, except if an officer’s life is at risk” in an effort to save lives, Trump said.  “Less lethal weapons” might also serve to save lives during police altercations, he said.

Police transferring “from one department to the next” will be addressed in the order, Trump said.  Assigning social workers to police departments to assist in certain situations will be one of the reforms, he announced.

Both chambers of Congress are working on legislation, Trump said.  “This is a big, big step, a step that hasn’t been taken before,” he said of the executive order.  He claimed that “many of the same politicians” who purport to support reform are insincere, touting his administration’s passage of criminal justice reform approximately two years ago.

He recounted his support of HBCUs (historically-black colleges and universities), which he said are “doing an unbelievable job,” and the creation of “opportunity zones” from legislation introduced by Sen. Tim Scott (R-SC).

Prior to the coronavirus outbreak, Trump recalled, unemployment among “every group” was at record lows.  “Our country was never in a better position, and we were planning on massive growth…and then we got hit by the virus, and now I’m building it up again…Jobs are rapidly coming back, and retail sales that were just announced two hours ago…they’re up 17.7%” after a much lower projection.”

In regard to the virus, Trump remarked, “I think we’re going to have a good answer for that, very, very soon” in the form of therapeutics, vaccines, and “a cure.”  “I think that’s going to happen very soon,” he said.

“We must build upon our heritage, not tear it down,” he said, while striving to deliver “justice.”

At 12:41 EDT, he asked law-enforcers to join him for the signing of the executive order and urged lawmakers to craft related legislation.

A number of police unions have endorsed the changes the order would outline, Trump said.  “These are the people who keep us safe, and they’ve done an incredible job.”

He then sat at a small desk to sign the order, titled, “Safe Policing for Safe Communities,” flanked by the officers, then held it up for the cameras as the officers applauded.