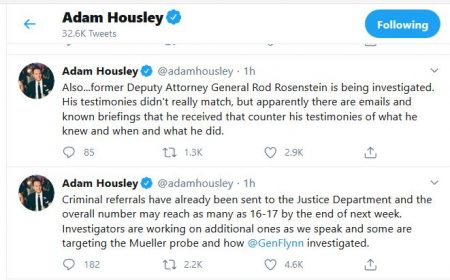 (Jun. 8, 2020) — At approximately 3:00 p.m. EDT/12:00 PDT, former Fox News reporter Adam Housley, who has continued to comment independently on some issues via his Twitter timeline, tweeted that former Deputy Attorney General Rod Rosenstein is “being investigated.”

Housley, 48, is the recipient of numerous journalism awards over his 17-year career, which formally ended when he departed the Fox News Channel in 2018.  From there, Housley has concentrated on growing his winery business, which he operates with his wife, Tamera.  He launched a YouTube channel titled “The Housley Life” featuring his family, business, travel, culinary arts and other items of interest and currently has 402,000 followers on Instagram.

Rosenstein, who oversaw the 22-month Special Counsel investigation into allegations of “collusion,” or conspiracy, between the 2016 Trump campaign and Russia inherited from the FBI, testified last Wednesday to the Senate Judiciary Committee for several hours as to his knowledge of the FBI’s initial probe known as “Crossfire Hurricane.”

A subsidiary of the U.S. Justice Department, the FBI formally reports to the Deputy Attorney General.  Because then-Attorney General Jeff Sessions recused himself from matters involving Russia, on May 17, 2017, Rosenstein appointed former FBI Director Robert S. Mueller, III to serve as Special Counsel to complete the investigation.

In May of last year, U.S. Attorney General William Barr announced he had appointed U.S. Attorney for the District of Connecticut John Durham to conduct an inquiry into the origins of Crossfire Hurricane after Mueller’s team, which issued 2,800 subpoenas and 500 search warrants, conducted nearly 500 interviews and exhausted $40 million, ultimately found insufficient evidence to charge anyone associated with the campaign with “conspiracy” or “obstruction of justice.”

A Justice Department Inspector General’s report released in December demonstrated that the FBI launched its investigation into the Trump campaign using confidential human sources, recordings and surveillance, and in particular of onetime informal campaign advisor Carter Page for nearly a year. Inspector General Michael Horowitz illustrated in his report that FBI agents were informed in January 2017 that the basis for their investigation, a set of documents now known as the “Steele dossier,” was unreliable and not intended to serve as investigative material. Nevertheless, the FBI continued to obtain surveillance warrants on Page, using the dossier as the basis, through June 2017.

Rosenstein signed the third Page FISA warrant application, testifying Wednesday that he believed everything to have been in order without necessarily reading every word it contained.  According to Housley of Rosenstein, “His testimonies didn’t really match, but apparently there are emails and known briefings that he received that counter his testimonies of what he knew and when and what he did.“

As Housley acknowledged, investigative reporter Sharyl Attkisson has accused Rosenstein of directing surveillance of her “and other U.S. citizens” when she worked for CBS News a number of years ago, citing “a former U.S. government agent” who came forward.

In January of this year, the Foreign Intelligence Surveillance Court (FISC), which approved the Page warrant applications, deemed the third and fourth warrants “invalid” based on the inspector general’s findings.  The initial two continue to face scrutiny, and the FBI and Justice Department were ordered to conduct a review of the process by which FISA applications were completed and submitted to the court.

On Wednesday Rosenstein claimed that then-Deputy FBI Director Andrew McCabe was “not fully candid” with him about the existence of a number of memos then-Director James Comey wrote and that McCabe “certainly wasn’t forthcoming.”  However, later that day, McCabe, who is now a CNN analyst, accused Rosenstein of lying under oath.

In 2018 and 2019, McCabe himself had faced possible prosecution for “lacking candor” with the inspector general’s investigative team but maintained his innocence and ultimately was not prosecuted.

Senate Judiciary Committee Chairman Lindsey Graham has since pledged to have McCabe, Comey and others testify.

Farther down in his commentary on Monday, Housley cited what he said are reliable sources regarding ongoing investigations and stressed that his tweets on the subject are not “opinions.”  “NONE OF WHAT I AM REPORTING ARE OPINIONS ON THIS…My sources have been correct on this from day 1,” Housley added a few minutes after 3:00 p.m. “Multiple sources with direct knowledge of the ongoing investigations.”

On Sunday evening he reported that his sources say Durham has enlisted assistance from “something like 4 U.S. Attorney’s,” [sic] which he believes “is huge.” 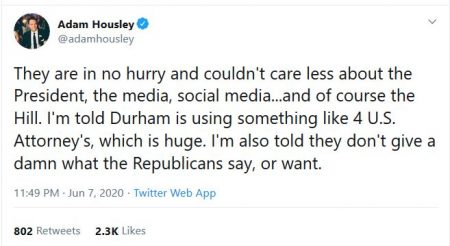 Not always tweeting in full sentences, Housley previously wrote that “Criminal referrals have already been sent to the Justice Department and the overall number may reach as many as 16-17 by the end of next week. Investigators are working on additional ones as we speak and some are targeting the Mueller probe and how @GenFlynn investigated.”

In April of last year, Devin Nunes, the ranking member of the House Intelligence Committee, said that committee Republicans had sent eight criminal referrals arising from Crossfire Hurricane to the Justice Department. “The referrals stem from the investigation conducted by the House Intelligence Committee when Republicans held the House majority,” Fox News reported in an April 11, 2019 exclusive.

Last month, Nunes appeared to have focused ongoing attention “on the Mueller team.” “We’re doing a large criminal referral on the Mueller dossier team that put together a fraudulent report — that knew there was no collusion the day that Mueller walked in the door. They set an obstruction of justice trap. There’s no doubt in my mind that we will make a conspiracy referral there,” Nunes said in an episode of the subscription streaming service, “Fox Nation.”

Continuing the Twitter conversation, Housley wrote that the current criminal referrals emanate “from Congress and are much more detailed than any before” and that Barr has not informed the president nor the Speaker of the House “what is transpiring in any depth.” 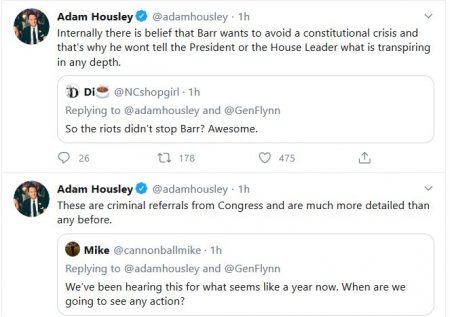 As far as the number of referrals which might be made, Housley said the “16-17” number he cited will be realized “by the end of next week at the latest…not there yet. Some have already been sent. They are finishing the others.“

Apparently in response to no one in particular, Housley tweeted about an hour afterward, “Also interesting to see how Durham’s investigation will differ from the varying Republican Congressional investigations. Remember…this crossed party lines. Trump also frustrating some in the investigation with his tweets and statement and politics.“

Where Will “Criminal Referrals” Lead? added on Monday, June 8, 2020

4 Responses to "Where Will “Criminal Referrals” Lead?"