(Jun. 5, 2020) — The threat of being labeled a “racist” (or any number of slanderous labels) by the Democrats and their enablers is standard fare nowadays.  In fact, that is all they have to offer us voters:  labels, hate-filled rhetoric, threats of violence, supporting hooded goons who hurt people, the defunding of law enforcement, supporting infanticide, destruction of the US Constitution, using federal agencies to destroy innocent folks, constantly attacking people of faith, promotion of purely inane socialist policies/ programs, etc., etc.The subject is but another case of a false narrative not supported by facts/data.  It’s all fueled by emotion, ignorance, blind ideology, lies and political opportunism.   However, most (reasonable) folks are inclined to deal with provable and incontrovertible facts as opposed to emotion and blind prejudice.  The obvious problem is getting the facts to the folks.  Thankfully, the attached piece, authored by Heather MacDonald, a renowned author, investigative reporter, and a member of the Manhattan Institute, does just that!  A brief snippet from the attached reads, “…a police officer is 18.5  times more likely to be killed by a black male, than an unarmed black male is to be killed by a police officer.”

President Trump has been falsely accused of mishandling the current pandemic when in fact, it’s his very critics and accusers who share most, if not all, of the blame for mass misinformation, the unnecessary loss of life due to inept Democrat governors not protecting assisted living facilities and VA homes (e.g., NY, NJ, MA, WA), Democrat leaders encouraging constituencies to ignore the  initial warnings from mid-January, and in some cases, into mid-March!?   Sadly, the real crusher to America was gifted to us by Drs. Fauci & Birx when they irresponsibly offered up a non-peer-reviewed, seriously-flawed computer model from abroad predicting the imminent/probable death of 2,200,000 Americans.  The ugly seed of fear was now planted; the fruit from this twisted vine was mass hysteria.  The deadly combination of fear, hysteria, ignorance, and political opportunism have collectively caused incalculable, and in some cases irreparable, damage to America and all of its citizens.  Ongoing investigative reporting is suggesting that the final death toll attributed to COVID-19 will likely be reduced downward due to misreporting, and if so, COVID-19 is no more deadly than the common FLU that we’ve been dealing with for decades!   This horror story did not need to happen!

The casual observer is certainly aware by now that the left will do and say anything in its lust to regain power.  We won’t know for certain if their scorched-earth strategy will work until November 3, but consider the following:

Not one of America’s major problems since 2015 was caused by Donald Trump, not one.  But all  of our  problems, in fact, propelled him to the US Presidency and in all probability will keep him there for four more years.  Under President Trump’s leadership, we’ve experienced unprecedented successes, e.g., highest stock market ever, highest employment levels ever, lowest unemployment levels ever, lowest unemployment levels for minorities and women ever, better trade deals, massively-funded enterprise zones, criminal justice reforms, an increase in manufacturing jobs, etc.   As the pandemic fades and the riots come under control, Americans’ work ethic and ingenuity will quickly recover lost ground.  President Trump isn’t perfect, but Joe Biden has nothing but pathetic gaffes to offer, nothing. 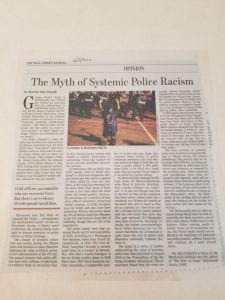