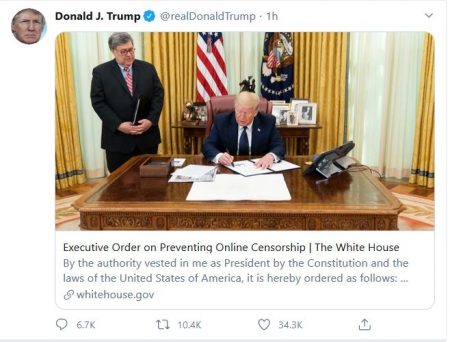 (May 28, 2020) — At approximately 9:00 p.m. EDT on Thursday, President Trump tweeted his perception that an expansion of “mail-in voting” in the U.S. “will lead to massive fraud and abuse.”

The tweet was a repeat of tweets he issued on Tuesday, after which Twitter made the decision to “fact-check” his assertions.  A visibly anti-Trump commentator at times, “fact-checker” Yoel Roth determined that Trump’s assertions were false, sourcing the assertion to The Washington Post and CNN, both of which have arguably displayed various degrees of bias against the president and his policies.

Some Democrat politicians, including California Gov. Gavin Newsom, advocate for a complete conversion to mail-in ballots so voters do not have to “risk their health” by standing in potentially long lines on Election Day.

Earlier Thursday evening, Trump signed a lengthy executive order “on preventing online censorship” contending that “Free speech is the bedrock of American democracy” and “we cannot allow a limited number of online platforms to hand pick the speech that Americans may access and convey on the internet.”

“This practice is fundamentally un-American and anti-democratic,” the order continues. “When large, powerful social media companies censor opinions with which they disagree, they exercise a dangerous power. They cease functioning as passive bulletin boards, and ought to be viewed and treated as content creators.”

The difference between a “platform” and a “publisher” was made in the 1996 Communications Decency Act, whose Section 230 provides, in part, “No provider or user of an interactive computer service shall be treated as the publisher or speaker of any information provided by another information content provider.”

When testifying to the Senate Commerce and Judiciary Committees in April 2018, Facebook co-founder Mark Zuckerberg contended that Facebook is “a tech company” rather than a publisher.

In April of last year, Twitter CEO Jack Dorsey met with Trump privately at the White House, at which time he claimed that “Twitter is here to serve the entire public conversation, and we intend to make it healthier and more civil.”  Since then, some have criticized Dorsey for “fact-checking” Trump’s comments while permitting the Communist Party of China to enjoy free rein on the platform.

An example Trump provided in the order states:

Twitter now selectively decides to place a warning label on certain tweets in a manner that clearly reflects political bias. As has been reported, Twitter seems never to have placed such a label on another politician’s tweet. As recently as last week, Representative Adam Schiff was continuing to mislead his followers by peddling the long-disproved Russian Collusion Hoax, and Twitter did not flag those tweets. Unsurprisingly, its officer in charge of so-called ‘Site Integrity’ has flaunted his political bias in his own tweets.

In the tweet, Trump referred to a Texas Supreme Court decision announced Wednesday which overturned a lower court’s ruling that mail-in voting should be expanded based on voters’ coronavirus concerns.

According to the San Antonio Current, “Texas’ Republican leadership has long opposed measures that would make it easier for people to register to vote and cast ballots, claiming such expansions would lead to fraud. Despite its popularity as a conservative talking point, research shows U.S. voter fraud is exceedingly rare.”

The state’s highest court ruled that a voter claiming a lack of immunity to the coronavirus does not constitute a disability and rationale for voting by absentee ballot.  According to The Texas Tribune:

Texas voters can qualify for mail-in ballots only if they are 65 years or older, have a disability or illness, will be out of the county during the election period, or are confined in jail. The Texas election code defines disability as a “sickness or physical condition” that prevents a voter from appearing in person without the risk of “injuring the voter’s health.”

The full executive order can be read here.