“IT NEEDS TO STOP” 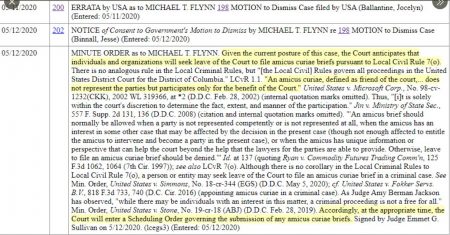 (May 14, 2020) — The strange case against Michael Flynn metastasizes into the bizarre.  After entering an order stating that he would “at the appropriate time” issue a “scheduling order” allowing essentially anyone on the planet to prepare and file amicus curiae briefs in the case of United States v. Michael Flynn, Judge Emmet Sullivan has on his own appointed his own personal “amicus curiae” to advise him on what next to do.

The appointed amicus curiae is a retired federal judge, one John Gleeson, now in private practice.  He recently was the co-author of a Washington (“Hello Darkness, My Old Friend”) Post op-ed suggesting that the DOJ motion to dismiss the charges would result in a “miscarriage of justice” and should be denied.  No wonder Sullivan tapped this guy to “advise” him.

The stated purpose of the appointment in Sullivan’s order is to “present arguments in opposition to the government’s motion to dismiss” and to advise the judge on whether he should issue an “order to show cause” to Flynn as to why he should not be held in “criminal contempt for perjury” under 18 U.S.C. § 401; Federal Rule of Criminal Procedure 42; and (this is good): “the Court’s inherent authority, and any other applicable statutes, rules or controlling law.”

18 U.S.C. § 401 empowers a court to punish the “misbehavior” of any person in its presence or so near thereto as to obstruct the administration of justice; the “misbehavior” of any of its officers in their official transactions; or the disobedience or resistance to its lawful writ, process, order, rule, decree, or command.  Ummmm…. while “perjury” is technically a form of “misbehavior,” the federal crime of “perjury” is mentioned nowhere in the statute.  Perhaps Sullivan meant to reference that statute in his order, but failed to do so.  It will be interesting to see what Gleeson can conjure up as “perjurious” statements by Flynn.

Wait… wait… maybe the “perjury” is Flynn’s entering a plea of guilty when he knew he was innocent.  Would that not be ironic?  Do not put it past Gleeson – or one of the other 411 leftist amici curiae law professors, attorneys, and “interested parties” contemplating submitting briefs to Sullivan – to make that argument.  In fact, the only people guilty of “misbehavior” in this evolving train-wreck – and arguably aggravated criminal misbehavior – are those from the Obama cabal responsible for the framing, entrapment, threatening, false and malicious prosecution and “unmasking” of General Flynn in the first place.

You know some of their surnames:  Comey; McCabe; Strzok; Brennan; Clapper; Biden; and, yes, the Second Usurper-in-Chief of the United States, Obama.  But since those defalcations took place in the bowels of the Deep State and the Oval Office rather than in the actual presence of Sullivan, that statute would likely not apply to them.  It will be interesting to see what “misbehavior” Gleeson will conjure up as to General Flynn.

As for Federal Rule of Criminal Procedure Rule 42, much like 18 U.S.C. § 401, it provides for the punishment of “criminal contempt” of court.  In general, contempt of court is broadly defined as any act which is calculated to embarrass, hinder, or obstruct a court in the administration of justice or which is calculated to lessen the authority or dignity of a court.  That is an exceedingly broad definition which could extend, for example, to a U.S. Supreme Court unanimous decision which excoriates a lower court – say, the U.S. Court of Appeals for the Ninth Circuit – for commandeering the theory of a criminal case before it and altering it, on the advice of its own appointed amici curiae counsel, to suit its own view of what the charges and result should be.  More on that in a moment…

Finally, Sullivan’s order directs Gleeson to consider other bases for sanctions, including “controlling law.”  How’s this for some “controlling law?”: On May 7, 2020, the Supreme Court handed down its unanimous (9-0) decision in United States v. Sineneng-Smith.  The opinion, written by Justice Ginsburg – with a concurring opinion by Justice Thomas… how often will you see that? – dealt with a criminal prosecution and conviction of a person for immigration fraud.  At the district court level, the parties, through their lawyers, presented their respective cases.   The defendant appealed.

On appeal to the Ninth Circuit, however, instead of reviewing and adjudicating the case presented by the parties, the appellate panel on its own motion named three “pro-immigration” amici curiae and invited them to brief and argue issues framed not by the parties, but by the Ninth Circuit panel.  This included a question never raised by Sineneng-Smith: whether the statute under which she was convicted was unconstitutionally overbroad under the First Amendment.  In accord with the amici’s arguments, the Ninth Circuit held – shockingly – that the subject statute was overbroad.

In reversing and vacating the Ninth Circuit decision (imagine that….), the Supreme Court – did I mention, unanimously – held that the panel’s “drastic departure from the principle of party presentation constituted an abuse of discretion.”  The Court added that “[t]he Nation’s adversarial adjudication system follows the principle of party presentation…” and that “in both civil and criminal cases, . . . we rely on the parties to frame the issues for decision and assign to courts the role of neutral arbiter of matters the parties present.” (Emphasis added).  The Court observed that there were no “extraordinary circumstances” justifying the “takeover of the appeal…” and noted that “a court is not hidebound by the precise arguments of counsel, but the Ninth Circuit’s radical transformation of this case goes well beyond the pale.” (Emphasis added)  Recall, these are the words of Ruth Bader Ginsburg.

Respectfully, a cogent analogous argument can be made that Judge Sullivan’s actions in the Flynn case – inviting, potentially, dozens if not scores or hundreds of amicus curiae briefs, further delaying final justice for General Flynn – is precisely the species of “radical transformation” condemned by the Supreme Court in the Sineneng-Smith case.  There would appear to be no rational reason for Judge Sullivan’s actions other than delay, perhaps into November …after all, it will take a long time to read and analyze 411 – or more – amicus curiae briefs.

As predicted, this case becomes uglier with each passing day.  It needs to stop.

Of Amici Curiae and Radical Transformations added on Thursday, May 14, 2020