“WHAT HAVE THEY DONE TO MY HOME, SWEET HOME…” 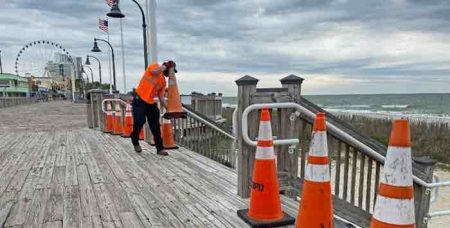 (Apr. 27, 2020) — This is being written as a dire warning to all, pleading with each and every one of you that you come to understand that our Deep State government has a hidden agenda which has little to do with the Wuhan virus. Use your own critical thinking skills and take personal responsibility for your own research. Do not take my words verbatim, nor those of the supporting links (mostly in the Appendix), but spend the time as if your life depended on it. Come to your own conclusions. Our governments are lying to us. The most difficult thing for each of us will be to totally disregard the chattering media class. It is nothing but lies and propaganda. Think for yourself. Trust yourself. We need to come to grips with what is really happening and then to tell others. Talk about this now before it is too late.

Do you know Neil Ferguson? Look below the Appendix line for why you should know exactly who he is and what he alone is responsible for.

So, let us begin: There should be little doubt in anyone’s mind by now that China, more specifically, the General Secretary of the Communist Party of China (CCP) and President Xi Jinping, has caused worldwide death and economic chaos, based on his handling of the deadly novel coronavirus outbreak in Wuhan from mid-October, 2019 through January, 2020. Whether the virus was a bioweapon or not is for legal scholars to deal with in the future but, for our purposes today, it is almost immaterial.

It is a provable fact that the leaders of Communist China covered up the severity of the outbreak with massive amounts of control, misdirection, and false reporting by the World Health Organization (WHO), which is a specialized agency of the United Nations (UN). The WHO is publicly and privately funded by various organizations and governments, the world’s largest vaccine alliance, GAVI, and heavily financed by the Bill & Melinda Gates Foundation (BMGF) and the World Bank, mainly for the purpose of selling vaccines globally. The WHO is essentially a lobbying group for the most powerful NWO globalists.  Mandatory vaccine and immunity ID cards are the globalists’ goals. Kill their plans now! .—Source

It is a physical impossibility to ‘lockdown’ (a term once used exclusively in prisons) three and a half billion people, without long-term strategic planning of the large-scale economic and societal consequences in a worldwide pandemic. Did the Wuhan virus crisis become the mechanism for which the globalists had planned as a world-changing event to create the framework for a totalitarian dictatorship, better known as the New World Order (NWO), which will be carried to completion under the auspices and control of the United Nations?

But, for the Trump-haters here in the US, the Wuhan virus created an environment where millions of middle-class jobs would be lost by a forced economic standstill, along with the complete disruption of citizens’ everyday lives.

The crisis presented itself as a vehicle to criticize the perceived mishandling of the epidemic and, in turn, the destruction of the entire U.S. economy, placing the blame on the shoulders of President Donald Trump which, if played out according to plan, will leave the nation and its economy in complete shambles by Election Day on November 3, 2020.

It is vitally important that you become fully aware of their planning, and scripting stages, wherein the scripting of who says what (where Governor Cuomo played a starring role) and, when it was said, all to gain maximum effect on the locked-down, fearful populace.  It is also important to realize that the war on terrorism has generally run its course, where the agent of biggest threat to your safety and security is now—disease.

October 18, 2019: Event 21 was reportedly a fantasized scenario, a worldwide pandemic hosted by The Johns Hopkins Center for Health Security in partnership with the World Economic Forum and the Bill and Melinda Gates Foundation (BMGF), in New York City, NY.

How could an integrated global endeavor such as Event 21 with the massive amount of coordination necessary for each individual country’s response to a worldwide pandemic come about by chance?  An event of this scale and magnitude would have taken years of planning, training and scripting. It is easy to believe that mandatory vaccine and immunity ID cards are the true goals of NWO globalists. The only people who cannot see this are those who, for their own personal reasons, choose not to.

It is my sincere belief that Event 21 was the globalists’  final session to make sure everyone was on the same page before the go-live signal was given.

The True Story Of How Humanity’s Being ‘Fundamentally Transformed’ In Our Lifetime added on Monday, April 27, 2020