“THEY WERE TRYING TO GET RID OF ME”

(Apr. 26, 2020) — As reported in Part 40 and earlier sections of our series, in late 2010, following three overseas deployments to Iraq and Afghanistan, Capt. Gary Mason experienced retaliation from the 25th Infantry Division and its 8th Theater Sustainment Command division, apparently for writing a letter of concern to his chain of command about conditions he and others experienced while deployed to Iraq in 2008.

The letter included accounts from several soldiers from the time Mason served in the 3/4 Cav. Unit under then-Lt. Col. David Hodne in Iraq’s Sunni Triangle. The soldiers described physical assaults stemming from what they believed was racial discrimination on the part of an enlisted soldier who had also assaulted Mason but suffered no consequences.

While the focus of his complaint was the assault and not racism, Mason observed blatant racism and sexism which he believed negatively affected the cohesiveness and discipline of the unit, an observation Mason shared in a face-to-face meeting with Hodne prior to his return to Hawaii just after Thanksgiving 2008.

Mason filed a formal complaint with Hodne over the assault, after which Hodne took steps to have Mason expelled from the Army on the premise that an allergic reaction he experienced to fumes from a burn pit precluded him from serving. After Army physicians in Hawaii had issued him a clean bill of health, Mason pursued a career in Public Affairs while continuing his studies to become a military chaplain, a calling to which he first responded in 2003.

Under different leadership within the 25th Infantry Division and with a fresh outlook on his dual pursuits, Mason was reinvigorated at the prospect of making the Army a lifetime commitment.

As described in Part 30, Mason was ordained a minister in Afghanistan under conditions which prompted him to reconsider that career path altogether. After a hostile reception from the military chaplain in Paktika Province and a choppy telephone call made to his wife in Hawaii, Mason decided to stay the course.

The retribution Mason experienced after composing the letter of concern took the form of multiple overseas individual assignments without the customary R&R periods with his family; cold stares and non-interaction from members of the 130th Engineer Brigade, to which he was later assigned from the 8th TSC; the lack of an office or even a desk at which he could perform his Public Affairs duties; public and unwarranted dressings-down from the 130th Engineer Brigade’s senior commander and Training Officer; and the 45th Sustainment Training Brigade’s recalcitrance in processing the awards he had earned while deployed to the Afghanistan war theater, among others.

A recommendation by Mason’s personal physician for a transfer out of the 130th Engineer Brigade was denied despite increasing friction and Mason’s growing fear for his safety and that of his family.  Ultimately, he contacted the office of then-U.S. Rep. Mazie Hirono (D-HI), now a U.S. Senator, to request a congressional inquiry into the treatment he was receiving.

At first, Mason related, Hirono’s office appeared willing to investigate his claims, only to later say it could not “force the military to do anything.” At that point, Mason said, Hirono’s office suggested that he take his complaint to Sen. Daniel Inouye (D-HI).  A distinguished World War II veteran, Inouye passed away in December 2012.

From there, Mason’s story continues:

I left in June 2012.  During this time, there was a lot of friction with the 130th Engineer Brigade, and I was really just trying to finish up. I wanted my last Officer Evaluation Report (OER), and I wanted to get my last military award — they call it a PCS award — and my combat award that they didn’t want to recognize.

I finally said, “Forget the awards.”  Whenever someone leaves, they call it a permanent change of station (PCS), and they have these time periods where depending on the higher value of the award — for instance, if it’s the Meritorious Service Medal — the more time they need to review it.  So if it’s a basic achievement award, it might take 30-60 days.  If you’re going to get a major award, you might receive a big going-away celebration; they’ll pin you; and you might even get a promotion.  They’ll give that OER to help you transition into a new Army post, and it sends you off on a good note.

Everyone in Hawaii was so upset with me because I filed a congressional and an EO complaint and because I went to the IG’s office on post. They were trying to get rid of me.  The 8th TSC didn’t want me back up there. The 25th Infantry Division didn’t want me there; they had a Public Affairs slot but said, “No, we don’t want him,” and the 130th Engineer Brigade felt as if they were babysitting. But I found it very interesting when it was 120 days left on island, then went down to 90 days, and I noticed that on the blotter, which is all the important dates of things that need to occur within the next 2-3 months, my name appeared with the notation that I needed an evaluation or possibly a PCS award.  However, when I asked the personnel officers, they said, “We’ll get to it; we’ll get to it,” when in fact they never intended to do a celebration or an award. They were upset and just wanted me to leave.

I actually started the process waiting for responses from Mazie Hirono. The Army was kind-of dragging its feet; there were some personnel officers and training officers who had the congressional on the commanders’ desks and didn’t want to respond to it.  The protocol is if the congressional member picks up an inquiry, they have 5-10 days to send it down to the chain of command; the chain of command knows about it and has about 5-10 days to respond.  Then the Congress member says, “Captain Mason, we have the inquiry, but now there’s going to be an investigation.”  So the Army can’t address me personally; they have to answer the congress person.  The Army has to go to a “no-retribution” model and be the go-between with the congressional office.

The command in Hawaii, from the 25th Infantry Division to the 8th TSC, was saying, “Capt. Mason is a hot potato; we don’t want him, so we’re going to stop all administrative actions on this service member.”  The 130th Engineer Brigade and 8th TSC said, “Everything that happened at the 25th Infantry Division had nothing to do with how Capt. Mason is begin treated now.”  That’s where the problem existed; in other words, they didn’t want to rate me.  But all of my awards and OERs from being deployed came back stating, “We need to promote Capt. Mason to Major immediately.”

The people back in garrison at the 130th and 8th TSC, which is above the 130th Engineer Brigade (I was working at a two-star level at 8th TSC, whereas at the 130th, it was just a colonel) reduced my level of responsibility so I would not get a higher rating from a senior rater; they were trying to eliminate all of those accolades.  What they were saying was, “Well, he hasn’t been here for six months or a year, so we can’t rate him.”  That sent a signal to the Human Resource Command which says, “This guy is bouncing around, so he must be problematic; he doesn’t even have rated time.”  So, it looks bad when it comes time for your promotion.

They were also trying to say that the Public Affairs Officer billet for which I was approved in 2010 belonged to Maj. Parker.  Well, just before I was leaving and when I applied to get a congressional inquiry going, Mazie Hirono accepted it; then, when they found out, immediately that same senior Public Affairs officer at U.S. Army Pacific Command came back and said, “Oh, well, yes, this position is really yours.”  They came back with that response just to protect themselves. 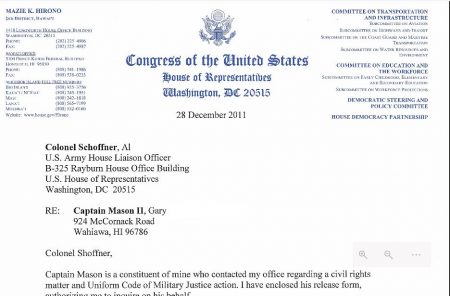 Mazie Hirono had a congressional aide named David Levao.  Once the congressional started, he started contacting me personally and asked me if there were any other service members who might be willing to serve as witnesses as to what happened.  There were some other African-American captains and enlisted soldiers working for Col. Hodne, and other people were starting to say, “Yes, these things did happen, and we were in fear for our lives and didn’t want to say anything, but if you will allow us to testify without using our names, we’d like to come to Rep. Hirono’s office to tell what’s going on.”

In February 2012, David Levao sent an email to my wife and I and basically said, “I’m now going to be available only by email, so please do not call me.”  Before, he would have me come to his office and we would go up on the roof of their office building to talk privately, and he was talking to me about “the Pentagon is aware of what’s going on; the Army CID knows about your case.” Then all of a sudden, he said, “Do not call me anymore.  Just contact me through email.”  And this is a quote:  “So I apologize for the confusion, especially since in last email, I wrote, ‘Feel free to call.'”  Then he put in quotes, “The valley is darker than I thought.”

He was a U.S. Army retired Operation Iraqi Freedom veteran, there from 2007 to 2008, and a Wounded Warrior Program fellow.  This was from the office of Mazie Hirono.  So I was thinking, “What do you mean, ‘The valley is darker than I thought'”?  That was very concerning for my wife and me.

I noticed that Mazie Hirono was not responding after launching the inquiry, and David Levao said, “We can’t force the military to do anything; we can’t really take it any further.  If you’d like, you can take your case over to Sen, Inouye’s office.”  So we decided to go across the hall to Sen. Daniel Inouye, who has since passed away.  Around March 2, 2012, we sent a letter to Sen. Inouye introducing the case and what was going on.  We shared what the Army had done and referenced all of the UCMJ articles which had been violated.  I provided examples of:

All I was saying that I desired from Sen. Inouye was an acknowledgement that there was a violation of the UCMJ articles and I wanted those who violated them to be held accountable; I wanted to stop them from retaliating and treating me with retribution; I wanted an audit of my officer military personnel file to look into my combat awards and personal achievement awards while I was there.  I also wanted to make sure that they looked at the evaluations of other officers and soldiers in Hodne’s command to determine if there were missing ratings or retribution because it was hurting them also for having witnessed what happened to me.