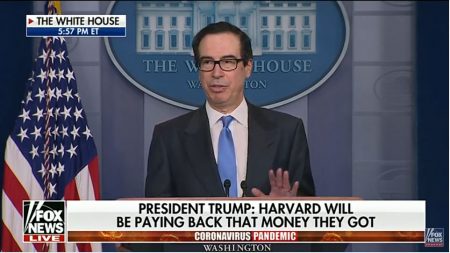 (Apr. 21, 2020) — President Trump began Tuesday’s White HOuse Coronavirus Task Force press conference by reporting that he is sending “love and prayers” to Americans who have “lost a friend or family member to the virus.”

He said the U.S. mortality rate is “one of the lowest of any country in the world” and that “our medical professionals have been incredible.”

Regarding his plan dubbed, “Opening Up America Again,” he said that more than half the states have taken steps to lift restrictions on business closures from the coronavirus. “They’re going to be doing it with tremendous passion,” he said.

He announced that Congress agreed on a new measure to allocate additional money for the Paycheck Protection Program, which includes millions for hospitals and $25 billion “to support coronavirus testing efforts” as well as small businesses shuttered from the pandemic.

The House of Representatives will be voting on the proposal Wednesday, Trump said he believed.  “Shortly, shortly,” he said.

Treasury Secretary Steven Mnuchin then thanked Senate and House minority and majority leaders for reaching the agreement, which will “give us another $310 billion” for small businesses as well as “disaster loans,” he said.

More than one million businesses benefited from the original CARES bill, Mnuchin said; the bill was approved earlier this month but its funds were exhausted last Thursday.  The majority of the funds were intended for employers to continue to pay their employees until commerce is restarted.

Mnuchin thanked Shake Shack for returning the money it received from the Paycheck Protection Program based on its own assessment that it was not needed.

Trump raised the fact that Harvard University received funds from the CARES Act against the backdrop of its very large endowment, to which the president strongly objected.

A question from Fox News’s Bret Baier asked how soon the new small-business funding will be available, to which Mnuchin said, “We’ve already impacted about 30 million workers, and we look forward to a lot more.”

Individuals with a misdemeanor on their records were not permitted under normal regulations to access Small Business Administration (SBA) funds, Mnuchin said, “and we changed those regulations.”

A “Phase IV” coronavirus bill might contain money for “infrastructure,” as Trump has advocated, Mnuchin said when asked by another reporter.  “In the case of states, we’ve heard from the governors” regarding budget shortfalls, he said.

“We look forward to business rebounding later this summer,” he said.  Altogether, “over $610 billion” will assist small businesses as a result of the coronavirus, Mnuchin reported.

He recognized the new White House chief of staff, former North Carolina U.S. Rep. Mark Meadows, for his assistance in coordinating the new agreement between Congress and the White House as well as Vice President Mike Pence.

As for a hypothetical fourth assistance bill, Mnuchin said it is “way too early to consider it.”

“Very clear guidance” will be issued for potential recipients of PPP funds, Mnuchin said, which will include “consequences” for companies taking money which do not need it.

He said that “direct deposits” have gone to many Americans qualifying under a relief provision of the CARES Act.

At 6:03 p.m. EDT, Trump retook the podium and recognized that “many Americans sacrificed their jobs” because of mitigation efforts to slow the spread of the virus.  He recounted his tweeted announcement Monday evening that he will suspend immigration “for 60 days, after which the need for extension or modification” will be reviewed.  “This order will only apply to individuals seeking a permanent residency,” he said.

“We want to protect our U.S. workers,” he said, and “as we move forward, we will become more protective of them.”

Trump reviewed his in-person meeting with New York Gov. Andrew Cuomo and said that the federal government will continue to assist New York, which has seen the vast majority of U.S. coronavirus cases and deaths.  Trump said he is “proud” of the relationship his administration has had with New York State and New York City and that “no expense has been spared” to assist the state.

“Thousands of ventilators” were sent to New York which Cuomo is sending to Massachusetts, he recounted, as well as the USNS Comfort as a medical ship.

“I said from the beginning that no American who needs a ventilator will go without a ventilator,” Trump said, and said he asked “Andrew” if the Comfort could return to Virginia to “get it ready for its next mission, which I’m sure will be a very important one, also.”

“The FDA has now authorized more than 50 diagnostic tests,” Trump said, including one “that a patient can take home.”  He said the test is “highly accurate.”  Four antibody tests have been approved, and FDA Commissioner Dr. Stephen Hahn was to provide further information, Trump said.

“I see a lot of light at the end of the tunnel,” he said, recognizing that Americans wish to return to their jobs and businesses to provide for their families.

As she did on Monday, Dr. Deborah Birx said that “large metro areas” have shown improved numbers in regard to hospitalizations.  In contrast to Monday, she said that Boston and Chicago now show improved, “flattening” numbers.  She urged residents of Washington, DC to continue “social distancing” since flattening has not been observed there.

She said that “small-population states” continue to see outbreaks in nursing homes and urged residents to protect those who are most vulnerable.  Mitigation guidelines are to continue “through all three phases,” she said, referring to the White House’s outline for restoring American productivity.

“Vulnerable” populations include indigenous populations and those with “co-morbidities,” she reminded Americans.  She recognized hardworking healthcare professionals’ protracted efforts “to protect Americans and give us one of the lowest mortality rates in the entire world.”

“Serologic,” or “antibody” tests, Hahn said, are “an indication that one has had the infection and has responded.”

There are “two types of antibody responses that can be detected,” he explained.  “This pandemic is truly unprecedented in nature,” he said, and “we’re just learning to understand what that response looks like.”

He said the FDA issued a policy last month to manufacturers of coronavirus tests as long as “validation” and information of the process was provided.  “The FDA still expects test manufacturers to validate their tests under this new policy,” he said.

There are “more than 90 manufacturers” which have devised tests, he said.

“We also want to go after anyone who is saying that the test has been authorized by the FDA and it hasn’t,” he said.

He said the FDA’s efforts will “help America to open up again.”

A reporter asked Hahn about the results of a Veterans Administration study which found that the administration of hydroxychloroquine, a drug Trump has touted as having been reported effective against the virus, produced more deaths than those not given the drug.  Hahn responded that “clinical trials” are actually what are needed to determine the drug’s efficacy.

Several reporters reminded Trump that he has strongly supported very sick patients considering asking their doctors for hydroxychloroquine in the hope of improving their symptoms and possibly shortening their illness.

Baier asked Trump about reports stating that North Korean dictator Kim Jong-Un is seriously ill, to which Trump said, “I wish him well.”  He said had he not been elected, “We would have been at war with North Korea.”

Baier noticeably took John Roberts’s place in the Brady Press Room.  Earlier Tuesday, Roberts was shown on a “hot mic” telling another reporter in the Brady Room about a study which showed that as much as 4% of the population in Los Angeles County tested “positive” for antibodies to the coronavirus, signifying a lower death rate amid the mention of a “vaccine.”

Another question from Baier to Birx asked if a resurgence of coronavirus in the fall, along with the beginning of the typical flu season, might prove “worse” than the current outbreak, to which Birx said today’s “emergency” prompted the guidelines for mitigation.  “That’s why he’s not stopped any of the ventilator orders,” she said of Trump.

When another reporter asked Birx if she “agrees” that the fall could see a “worse” situation, she replied, “I think this has been pretty bad.”

Additional questions on the immigration executive order followed, one of which asked if “the virus” was being used as a pretext to reduce “legal immigration.”  In response, Trump said the current situation has not been seen since the 1917 Spanish flu pandemic and that he is concerned about American workers. He said, however, that “the farmers will not be affected” by restrictions on customary seasonal workers.

To the fear that the virus will again spread once businesses reopen, Trump said, “You can’t break the country.  At some point you have to go back.  I want the governors to do it; if we see them doing something we don’t like, we’ll stop it very quickly.”

The same reporter asked Birx to “weigh in” on the reopening of “hair salons, nail salons, and tattoo parlors” because of close proximity between proprietors and customers, to which Birx said that “the data” to be used by mayors will guide decision-making and maintain the mitigation factors of “social distancing,” keep social gatherings to “less than ten,” and other actions.

He again professed his belief that he was elected partially due to his stance on China and U.S. trade, which he said cheated the U.S. out of “tens of billions” of dollars over many years.  He said progress was made through his new trade agreement with China, then “along came the invisible enemy,” as he often terms the coronavirus.

As for Harvard, Trump unequivocally said, “They gotta pay it back. I want them to pay it back.”  “If they don’t pay it back, we won’t do something else,” citing the institution’s $40 billion endowment.

Trump concluded the presser by stating that “We’ll have some interesting things to put out tonight.”