“I LET THEM KNOW I’M NOT HAPPY”

(Apr. 19, 2020) — President Trump opened Sunday’s coronavirus presser by reporting that Republicans “are continuing to negotiate with the Democrats” on a new aid bill, which would be the fourth of its kind if passed.

He said “hospitals” are also intended recipients of more funding, a key request of House Democrats.  “We have some very good negotiations going on right now,” he said, and that Monday will likely see a congressional agreement.

The total tests conducted in the U.S. exceeds that of a conglomerate of European countries and Australia, he reported.

Vice President Mike Pence will be speaking with governors this coming week, Trump said.  Some governors are not aware of their states’ full testing capacity, he said, specifically as to private laboratories as opposed to state-run labs.

Academic laboratories and “big research labs” are part of the “tremendous capacity” available, he said.

“We continue to procure millions of swabs, test-collectors,” he said, then took a wrapped  “swab” out of his jacket pocket.  He called it “very sophisticated” and resembling a Q-Tip.  He said some supplies of new swabs “have been shipped to states and the states don’t know where they are.”

He repeated that the U.S. has excelled all other nations in the area of testing.

He then referred to an article in the weekend Wall Street Journal which complimented medical workers, truckers, and the Trump administration for responding to the coronavirus pandemic.  The article touted Trump’s practice of “federalism,” a tenet of the U.S. Constitution, Trump said.

He thanked the writer for the column.

Developing new ways of testing were done “under pressure,” Trump said, and that members of his team have “worked long hours.”

“We’re close to finalizing a second partnership” to produce millions more swabs monthly, he said.  “We also are going to be using the Defense Production Act in one U.S. facility by over 20 million swabs per month.”

“Swabs are easy; ventilators are hard,” he observed.

He repeated that “nobody who needed a ventilator has been turned down.”

“Many governors are doing this incredible work…on testing,” he said.  “It should be a local thing, but we’re helping them a lot.  We’re encouraging them to share their successful strategies with other governors,” he said.

He acknowledged that “some people believe in testing strongly” and others less so.  He said that if governors “want it, we should give it to them.”

Trump said that although some governors “wanted to have total control” over the decision to reopen their economies, they have recently asked the federal government to do it.

He said that the word “ventilators” is no longer mentioned.  “We’ll help the governors and make sure that everything goes well…everything’s easier than a ventilator; ventilators are tough.”

He reported that New York Gov. Andrew Cuomo will be sending as many as 400 unneeded ventilators to the State of Massachusetts.

New York City is seeing a decline in hospitalizations, Trump said, along with a number of other cities across the country.

One country, he said, did not practice mitigation and has seen a dramatic increase in coronavirus spread, he said. He said that Italy, Spain and France first approached the pandemic by not closing businesses but changed their stances.

CMS will be finalizing new guidelines for Americans to have elective surgeries again and in-person doctors’ visits if they are necessary, he said.

“We had no capacity in the hospitals with what happened with the ‘plague,'” he said.  “We are asking that healthcare facilities have plans in place to safeguard their patients.”

His administration is continuing its “massive military operation” to assure enough beds are available for ill patients, he said.  He thanked New York Gov. Andrew Cuomo for “the relationship” built over the crisis.  “He’s worked very well with us,” he said, although Cuomo has been critical of the administration intermittently.

He said the Army Corps of Engineers has been “fantastic.”

Trump then introduced a video clip of Cuomo’s presser from earlier on Sunday wherein he complimented the “federal government” for responding to its needs for ventilators.  Early calls for tens of thousands of ventilators were based on certain “projections,” Cuomo said.

Cuomo is rumored to be positioning himself for the Democrat presidential nomination at this summer’s convention.

Trump thanked “Andrew” for his positive statements regarding his administration’s efforts.  “It was a very nice thing that he said, and people really appreciate that,” he said.

There are now 10,000 ventilators in a national stockpile, Trump said.

“Through Project Airbridge, 64 flights have arrived in the U.S. with medical supplies, “with 50 more flights scheduled in the near future,” he said. He described those working on the project as “young, incredible people” and some “older people” who are “pretty smart” and “young geniuses.”

As for medical gowns, “the quality of the gown is very important.” The gowns being distributed are “very safe,” he said.

He recognized companies making medical personal protective equipment including Honeywell, which will be “producing 20 million masks a month,” a statement also made on “Sunday Morning Futures” by White House Trade Adviser Peter Navarro.

Trump recognized 3M, with which “we had a little skirmish” but with which he said it “worked out well.”

He said he “always wondered” why medical masks were not sterilized, which is now being done.  The process can be carried out “up to 20 times,” Trump said.

“We’ve learned a lot about supply chains,” he said, and many manufacturers have returned to the U.S. He said he “ran on that.”  “I ran on China and other countries, the way they were ripping us off…China fully understood that,” he said.  He described the relationship with that country as “not friendly” at first but having a positive trade outcome.

“Of course, the virus came along and I’m not happy…I let them know I’m not happy,” he said. “We’re not in a position where we’re going to say much yet.”

He praised the deal made late last year but added, “you have to look at all the people that are dying.”   He said many European countries have been “shattered” by the coronavirus.

“If we’ve learned something, it’s about supply chains,” he said. “Why do we need a supply chain? Make your parts here,” he added.  “We’ve learned a good lesson; I think a lot of smart people knew that before.”

He denounced “globalists” who have promoted outsourcing American manufacturing.

He said “investigations” are taking place involving the World Health Organization (WHO) and World Trade Organization (WTO).  He said that China “took advantage” of the WTO’s policies as a “developing nation.”  “I might have gotten elected to a certain extent because of China,” Trump said.

“With China we made the deal, became friendly, but then the virus came along,” he noted.

He recalled a February 19 Democratic debate moderated by Fox News’s Bret Baier wherein the word “coronavirus” was not mentioned.

He said the new trade deal has benefited U.S. farmers.

“New treatments” are under study to fight “the plague,” he said, in a “COVID Treatment Acceleration Program” which is moving “at record speed.” “The speed of development of antiviral, antibody and vaccines” has been remarkable, he said. 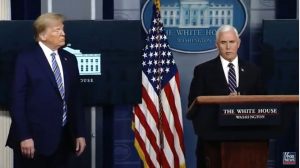 At 7:09 p.m., Trump recognized Pence as working nonstop as head of the White House Coronavirus Task Force, at which time Pence took the podium.

Pence reported that U.S. deaths now exceed 41,000, extending his condolences.  He said that “progress” is reflected in “large metro areas” which are “continuing to stabilize” which include Detroit, New York City, New Orleans, and Denver.

He said the progress made is “a tribute to the American people” but cautioned the public to continue to observe the administration guidelines to “slow the spread.”

Pence said the number of ventilators in the stockpile is 9,500.

On Monday, Pence said, a conference call with all state and territorial governors will take place to “make sure we’re helping them to review” the new guidance for reopening the economy.  “Detail about the testing infrastructure” will be shared, Pence said.

“As the president said this evening, we’re here to help,” the governors, Pence said.

He concluded his remarks at 7:16, at which time Trump brought up CMS Administrator Seema Verna, who spoke about the new guidance her agency will soon issue for standard doctors’ appointments and elective surgery.

“Thanks to the American people, we are in a much different place,” she said, and hospitals are now reporting “unused capacity.”

As with the general economy, America’s healthcare systems will be “reopened,” Verna said, on a gradual basis.

Regarding nursing-home residents, she said, “this has been a very hard situation.”  She said Medicare has increased its amount of reimbursement for coronavirus testing in nursing homes.

Today, she said, “we are requiring nursing homes” to report any cases of “COVID virus” to family members as well as to the CDC.  She said that “surveillance” will begin in nursing homes as well as in other places which will identify contacts of anyone diagnosed with the virus.

The first question asked Trump about any “advice” he would offer protesters of the government shutdown, to which Trump said that “people are allowed to protest…I see protesters for all sorts of things; I’m with everybody.”

A number of questions were contentious, with a CBS reporter criticizing Trump for continuing to hold large rallies in February as the coronavirus threat was growing.

Trump berated at least two CNN reporters as well as the network’s “ratings.”