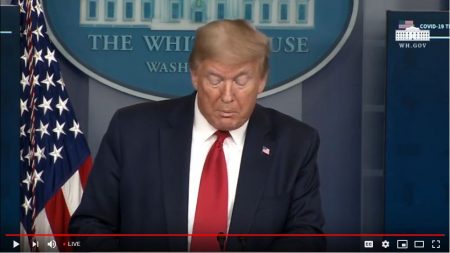 They were provided with factual information to implement the White House’s new guidelines for reopening America, Trump said, at their own respective paces.

“More than 80 million Americans” have received “relief payments,” Trump said, as a result of the CARES Act. “If you’ve not received your check, please visit IRS.gov/getmypayment,” he said.

USDA Secretary Sonny Purdue will be launching a $19 billion program for farmers and ranchers, Trump announced.  “These are great people,” he said; “never complained…”

He recognized the difficulties on the part of food-producers to get food products to distributors.  On that point, Purdue’s remarks acknowledged interruptions in the food supply chain.  The new program will be the “USDA Food Assistance Program,” Purdue said, and will be unfolded in two parts.

Financial assistance to producers will be made to counter the “economic losses” from the coronavirus pandemic, Purdue said.  He also said that foodstuffs will be made available to needy Americans rather than disposed of by farmers who cannot sell them, as has occurred in recent weeks.

Purdue thanked Trump for his “unwavering support” on behalf of farmers and ranchers.  In turn, when Trump retook the podium, he complimented Purdue on the “great job” he is doing as USDA secretary.

In excess of 3.78 million coronavirus tests have been done, Trump said, and the U.S. has the best testing system in the world.  In contrast, Kristin Fisher of Fox News reported just after 6:00 p.m. Friday that the Trump administration’s promises to open drive-through testing centers by means of companies such as Walgreens and CVS has not been kept.

“The governors are responsible for testing,” Trump said, and that “up to 1 million additional” tests will be available soon.  A new supply of cotton swabs will become available, and the U.S. is now “the king of ventilators,” Trump said.  “We’ve handled that situation incredibly well,” he said.

He said he spoke with Mexico’s president Friday and agreed to send ventilators there.

After announcing the “Reopening America” guidelines on Thursday, Trump said, some in the media misrepresented the “scope of the testing capabilities.”  As he has said before, he maintained that the testing for coronavirus “started at ground zero.”  “We’ll help New York and other states get even better on their testing,” he said.

He said large areas with few people have often experienced low numbers of coronavirus and that those regions might be the first to “come online.” We will eventually “have our country back,” he said.

Trump again expressed optimism that the economy will recover and be “better” than it was before the pandemic hit.

“I think the surge seems to be over,” he said.  “The research and development that we’ve done at the federal level has been absolutely incredible,” he said, claiming that the media “will see it” eventually.

He said ventilators were provided to governors to meet their requests but were not always needed.  In New York, he said, the USNS Comfort “was there, ready willing and able, but they didn’t quite need the beds that we produced.”

He aid it was better to be “over-prepared than under-prepared.”

“I think you’ll be hearing a lot about reopenings” soon, Trump said, adding, “We may be opening, but we’re putting safety first.”

He said that “four or five weeks ago” the economy was excelling.  “Closing it all up” sacrificed that, he acknowledged, but saved many lives.  Although “one is too many,” he repeated the revised estimate of 60,000 deaths from the coronavirus.

“We are getting very, very close to seeing that light shining at the end of the tunnel,” he said.

At 6:43, Trump turned over the presser to Vice President Mike Pence, promising to be “right back.”

Pence reported that “more than 36,000 Americans” have now lost their lives.  “Cases and hospitalizations” are declining in New York City, Detroit and other areas, he said, crediting Americans for practicing mitigation measures.  “We hope every American is encouraged by the steady progress we are making,” he said.

“All 50 states and all territories are under major disaster declarations” for the first time in U.S. history, Pence said.

The guidelines unveiled on Thursday are twofold, Pence said.  For “Phase One,” a 14-day “downward trajectory” could signal the state or region’s readiness to begin “Phase One,” he said.  At that point, the “most vulnerable” still need to be protected, he said.

There will be a “partnership with states” on testing going forward, Pence said, a change from the “diagnostic testing that is routinely required” and was formerly carried out by the CDC. Pence estimated that 120,000 tests are being conducted each day.

“New and innovative tests” have been introduced, including the two new antibody tests, Pence said. “Our best scientists and health experts assess that today, we have a sufficient amount of testing to meet the Phase One requirements of reopening,” he said.

CDC officials will be activated in each state to observe coronavirus cases, he said.  The administration will continue to do everything necessary to provide the states what they need for a “safe” reopening, he said.

The first type of test is to determine if someone is “infected,” Fauci said, while a second type determines subsequent immunity.  He was tested “today,” he said, receiving a “negative” result.

He said that an individual could test “negative” on a given day, but to be sure the person has not been exposed, repeated testing each day would have to be done.  “A test means you’re ‘negative’ now,” he explained.

Whether or not immunity is long-lasting, Fauci said, is another question.

Knowing who is infected, Fauci said, is important, aided by “testing,” “but the emphasis that we’ve been hearing is essentially, ‘Testing is everything,'” with which he disagreed.

He said that “early on, we had a problem” in regard to testing which was “corrected.”  It was a technical problem from within…” he said, which has utilized the private sector to improve.  He recounted initial delays and other roadblocks which “existed, but upon careful examination, what you are going to hear is many of those have already been corrected and others of those will be corrected,” he said.

There is “supply and demand,” he said, “and if you have a supply that can meet the demand, but the supply is not connected to demand, then ‘supply’ falls apart.”

“What we need now, we believe that with better communications, we can make that happen,” he said. Fauci said he believes there is enough testing capacity “to take the country through Phase One.”