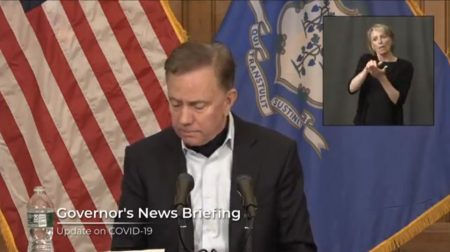 (Apr. 15, 2020) — At Wednesday’s press conference, Connecticut Gov. Ned Lamont (D) appeared with a black cloth around his neck which he used as a prod to convince state residents to wear a mask when they are outside.

Earlier on Wednesday, New York Gov. Andrew Cuomo issued an order to his constituents to wear masks when outdoors.

Lamont did not specifically say then that he was “ordering” the move.

On Monday, Cuomo, Lamont and several other Northeastern governors announced a collaborative approach to reopening their states’ economies.

He said the Paycheck Protection Plan is assisting many business-owners in Connecticut and called for a “fourth” coronavirus stimulus bill to assist states with budget shortfalls experienced from the closure of their economies.

Lamont said he opposes the actions of some governors who have closed their state parks.  Rather, he said, outdoor activity is important as residents remain largely out of work and children home from school.  He suggested that mayors might close certain roads to create “boulevards” for walking.

After Lamont’s initial remarks, Connecticut’s insurance commissioner, Andrew N. Mais, announced that residents may still enroll at AccessHealthCT, the state’s insurance exchange created after “Obamacare” was passed in 2010, through Friday if they are uninsured.

MassMutual and the State of Connecticut are working together to provide up to $25,000 in “free life insurance for three years” to healthcare workers making less than approximately $260,000 annually.  The amount would be $10,000, however, for older applicants.  “Security people” or anyone who “may have been exposed to the COVID19 virus” would be eligible, Mais said.

To a reporter’s question about wearing a mask, Lamont responded, “I am strongly suggesting this is what you gotta do.  If you can keep your social distance, you don’t have to wear a mask…if you get to a crowded group, wear a mask…if you work at the grocery store, wear a mask,” which he said could constitute “a scarf.”

He said that an “executive order” on the issue will likely emerge “in the next 48 hours.”

“We’re going to issue those guidelines to be clear as day about what you gotta do,” he said to another reporter’s question, as a result of the coronavirus problem “continuing to grow.”

“When you’re walking down the street, use your judgment,” he added in clarification.

As for the state budget, Lamont said that the rainy-day fund would be tapped to keep the state running until the economy is revived.

A “new, automated process” for filing unemployment claims is now active, Commissioner Kurt Westby said.  He compared the incoming claims as “a tsunami” and said “there is a lag” for any resident who is currently unemployed.  He said he and his staff are working “around the clock and on weekends” to speed up the process.

Another reporter asked Lamont how he “might enforce” the wearing of masks “in a grocery store,” for example, to which he responded, “Right now, it’s self-enforced.”  He said some residents have been sending video or photos of some places “which probably aren’t enforcing it right now.”