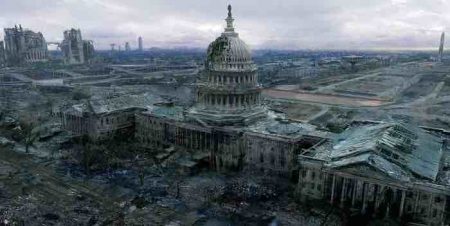 (Apr. 15, 2020) — An unintended consequence of my years of reading Agatha Christie mysteries is that I learned how to separate the red herrings from the salient facts hiding in plain sight, which are always the key to solving the puzzle. Admittedly, the queen of the mystery novel often outsmarted me, as many times her chief detective Hercule Poirot conducted his denouement before I’d figured out who done it; nevertheless, I learned quite a bit from his exemplary method. And I’m going to attempt to use it now with respect to the unprecedented situation in America today.

Let’s begin with the premise that we know almost nothing with any certainty about the Chinese coronavirus pandemic. We don’t know with certainty how it began, or whether it occurred in nature or was created in a lab. There is also great confusion and uncertainty regarding how cases are confirmed, and whether the number of deaths being reported in Italy and in the U.S., at any rate—since we can trust nothing coming out of Communist China—are accurate, since co-morbidities are generally not being factored in.  In addition, many assert the tests themselves are woefully inaccurate, producing both false positives and false negatives. Furthermore, last week the Department of Health and Human Services (HHS) sent American hospitals a new directive to count COVID-19 as the cause of death even if it is merely “suspected” when a patient dies in the hospital. According to the directive, signed by Secretary Alex Azar, they are required to list: “Number of patients with suspected or confirmed COVID-19 who died in the hospital, or any overflow location on the date for which you are reporting.” (Italics mine).

So, what do we actually know for certain?

We know that the mainstream media has churned up enormous fear over the Wuhan flu, aka COVID-19. In fact, we can’t escape the ubiquitous picture of that spiky red ball that is out to get us. Does it strike you as odd that we were never on such intimate terms with any virus before? Apparently, none of them merited an artist’s rendition, let alone a fraction of the publicity this infinitesimal critter has amassed. If there were a virus Hall of Fame, we know who’d be in pride of place. We also know who can promote such stardom or notoriety overnight: our echo-chamber media propagandizers.

Truth be told, the media has not had such a field day counting up dead bodies since the war in Vietnam. Even the President is calling this flu epidemic a “war.” So we know there is a huge media campaign to impress us with the danger presented by this virus which is hyped as if it were the Black Death.

Trouble is, the ballyhoo doesn’t fit the reality. Turns out that COVID-19 is far less deadly than many other coronaviruses have been, including SARS, MERS and Ebola, with their death rates of 20-40%, or the Avian flu with a whopping 60% mortality rate, whereas COVID-19 clocks in at a modest 1% or well below, closer to .1%, depending on whose data you trust.

In fact, Dr. Anthony Fauci himself affirmed in an article he co-authored for the New England Journal of Medicine’s March 26th issue, that COVID-19 is essentially “a severe seasonal influenza,” i.e. a bad flu. Nothing we haven’t seen before in terms of its death rate. Perhaps Fauci quietly published this article a couple of weeks ago to give himself plausible deniability later on when the public may well be clamoring for his scalp.

We also know that, as with the seasonal flu, most who succumb are our frail elderly—which is why we call them “frail.” Even a cold can result in pneumonia and death for our octogenarians. Have we forgotten that people grow old and eventually die of one thing or another? But I digress.

Let us now leave behind all thoughts and conjectures about the Wuhan flu/Chinese Coronavirus/COVID-19 pandemic, as if it had never occurred. Instead, let’s examine only the resultant facts, the way Poirot does as he separates out stories and fabrications from verifiable information to get at the truth. Let’s regard the reality before us without the distraction of the clangorous, anxiety-producing reports that are filling the airwaves.

Here then, are the facts stripped of all narrative

Churches and synagogues have been closed. A pastor was arrested for holding a church service in this country which was founded upon religious freedom. People are forbidden to congregate not only for religious worship, but even for their own weddings, bar mitzvahs, baptisms, and funerals, let alone birthday or anniversary celebrations.  Many states are under lockdowns in which you can be fined and/or arrested for leaving your home for an “unnecessary”  purpose. Public parks have been closed off to the very public they were intended for. Small businesses, the lifeblood of America and of our middle class, are dying in plain sight—many shutting their doors for good as the shutdown drags on.

Americans, in arguably the foremost of all first-world countries, suddenly can’t find toilet paper. And for weeks now, under draconian lockdowns in nearly every state, you can’t get a fast food hamburger, let alone sit down to a medium rare ribeye or grilled salmon at your favorite local restaurant; in many places you can’t get your pants hemmed or your dress dry-cleaned; you can’t get your teeth cleaned or cavities filled; you can’t get a haircut, manicure, pedicure, or a hip replacement, as these are all deemed “non-essential.”

By the way, did you ever stop to wonder just who is determining what is “non-essential”?  Funny, I don’t remember voting on this. When exactly did we surrender all power over our lives in the land of the free and the home of the brave?

Our men are humiliated and subdued, our women demoralized, and our children traumatized. But none of this is due to the Chinese coronavirus. Rather it is due to dictatorial governmental edicts, i.e. tyranny—exactly the kind of abuses that led to the American Revolution in the first place. On second thought, no, not exactly—the current abuses are much, much worse.

Who is determining what is “non-essential”?

In our culture that venerates expertise, the prevailing experts have given us their sage advice: kiss America goodbye, and go wash your hands.

Now let’s dig deeper by lining up a few key facts completely stripped of the scary pandemic narrative. This is the point when Poirot would be asking “Cui bono?” Who stands to gain?

Almost overnight the burgeoning Trump economy has been trashed. All the amazing job gains have vanished and we’re moving more and more into the red, as unemployment soars. Many of these job losses will not be magically restored once the economy is turned back on.

Similarly, the gains in the stock market that had instilled hope and enthusiasm and renewed consumer confidence in America have now been summarily wiped out.

And the increasingly popular Trump rallies, all but guaranteed to help carry this President to a landslide victory in November while making any Democrat’s rallies look pathetic by comparison, have been swept off the map.

Add to that the fact that President Trump, albeit practically at knife-point, signed the biggest bailout in American history, which makes him responsible for adding trillions to our national debt, though up till now he prided himself on trimming wasteful spending.

Do you begin to see a pattern here?

Do you begin to see a pattern here?

At last we are poised to discover “who done it,” and as Agatha Christie mystery fans have learned to expect, we’re about to be shocked by the revelation. As in many of her finest tales, this denouement involves not just a single culprit, but the stealthy employment of accomplices you’d never have suspected.

Largely obscured by the hysteria surrounding the COVID-19 pandemic, lies a truly audacious plan. A plan that could not have been perpetrated without the collusion of the media and the UN’s World Health Organization, among other players. This colossal undertaking partakes of Goebbels’ “Big Lie” phenomenon: manipulation on this scale is so preposterous that people just can’t believe anyone would attempt it. Yes, the virus is real. But virtually everything created around it has been orchestrated and scripted—to serve a purpose.

So who are the culprits? They should be familiar to us by now, as they are the same enemies of America who seek to turn our nation into a Socialist dystopia; they are the ones bent on removing Trump because he stands in their way. They tried six ways to Sunday to take him down, but nothing worked—until now. They can be grouped together as a consortium of America-hating globalists, Leftists, Democrats, Progressives, RINOs, and powerful New World Order zealots, who have now gotten precisely what they wanted. Even if the nationwide shutdown were to end tomorrow, they would have succeeded in turning America into a mirror image of Communist China for at least a few weeks. They know it can be done. They know how to do it. They just did.

They have succeeded in jettisoning President Trump’s 3½ unprecedentedly successful years in office, and have tricked him into conspiring in what may turn out to be his own and America’s demise.

Now, do you still want to talk about the virus and whether it came from bats?

Do you want to talk about test kits, or “flattening the curve”?

Look around you. Look at our desolate downtowns, empty streets, shuttered stores—look at the sad eyes of your fellow citizens above their pathetically masked faces. This is the reality. The purpose of the media’s incessant fear-mongering as they gleefully trumpet “skyrocketing” new cases of the virus, is just to distract you from grasping the tragedy unfolding all around us.

In the end, we’ll see this pandemic wasn’t Armageddon after all. It was merely, as Fauci himself admitted, a bad flu, as we do get from time to time.

But one of the patients who lies dying is America.

And I fear that nothing short of Divine intervention can bring her back.