Are Humans In The Throes of a Mass Extinction? 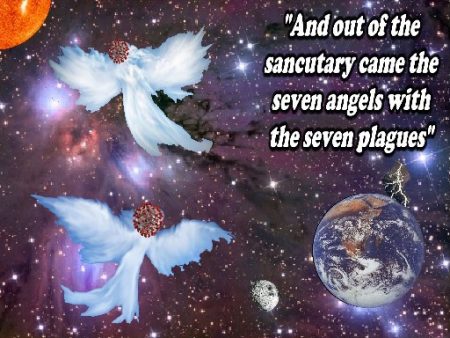 (Apr. 5, 2020) — “Anyone who was alive during the outbreak of the bubonic plague in the 14th century experienced something terrifyingly close to the widespread death and chaos of an apocalyptic event.” Alan Huffman

“Near the gates and within two cities there will be scourges the like of which was never seen: famine within plague, people put out by steel, crying to the great immortal God for relief.”    Nostradamus

The Coronavirus, the current scourge of mankind, is a tiny little microbe described in the Science Direct website as follows:  “The Coronaviridae, is a monophyletic cluster in the order Nidovirales.  They are enveloped, positive stranded RNA viruses of three classes of vertebrates:  They are spherical in shape and about 120–160 nm (nanometers) across.  The particles are typically decorated with large, club or petal-shaped surface projections (the “peplomers” or “spikes”), which in electron micrographs of spherical particles create an image reminiscent of the solar corona.  In terms of genome size and genetic complexity, the Coronaviridae are the largest RNA viruses identified so far.”

A nanometer is one billionth of a meter.  At around 140 nm, the Coronavirus is so small that it would take around 2,118,000 of these little killers, laid end to end, to equal a foot, and yet this enemy of human flesh can cause a person to literally drown in the fluids of the lungs, triggered by the virus.  Symptoms of the infection include a cough, which may produce greenish, yellow, or even bloody mucus; fever, sweating and shaking chills; shortness of breath; rapid, shallow breathing; sharp or stabbing chest pain that gets worse when you breathe deeply or cough and loss of appetite, low energy, and fatigue.

Unfortunately, for humans, the Coronavirus is just one of many microorganisms that can be fatal.  Is there one virus or bacteria that has yet to mutate into a deadly form that has no cure and could create a mass extinction of the human species?  Of course, scientists don’t know.

The Bubonic plague in the 14th Century was caused by a bacterium that was spread by infected fleas on small animals.  Many people are not aware that there were two outbreaks of the plague (or Black Death):  one around the 6th Century and the major pandemic in the 14th Century.  The second outbreak was estimated to have killed one-third of the European population and originated in Central Asia.

According to the National Geographic website, the Bubonic plague ……

“…causes a painful, relatively quick death that often involves vomiting, bleeding, and gangrene of the skin.  Fortunately, today’s antibiotics can kill the Yersinia pestis bacteria and save its victim upon early detection.”

The Spanish Flu of 1918 was a massive worldwide pandemic that resulted from what was described as the H1N1 virus from birds.  It reportedly infected 500,000,000 people on six continents and resulted in a death rate of about 10%.  At least 675,000 Americans died of the disease.  However, general human hygiene was more primitive then and treatments by vaccines were not as readily available as they are today.

None of these pandemics came even close to a mass extinction of the human species.

The human species, as an animal that walks upright on two legs (bipedal), has only been around for about 3.6 million years.  In current form, humans have only been around about 200,000 years.  It should be noted, however, that the five mass extinctions were several million years apart so man hasn’t been around long enough to fall within a mass extinction event.  If logic is to be applied from the history of earth, the bipedal human species is surely living on borrowed time, but it could be a very long time.

The planet now holds about 7.8 billion human inhabitants according to scientific estimates.  But by 2100 it is forecast that there will be close to 10 billion people on planet earth.  Some say the increase is unsustainable and they are probably right.  Others say the increase at the current rate cannot last indefinitely before a cataclysmic event reduces the human population by many billions.

Most species on earth can be impacted by a population explosion that can result in extinction.  The extinction can also come from significant ecological changes (droughts, storms, exploding volcanoes, earthquakes, large meteor impacts, etc.) a lack of resources to support the current population, an increase in the predator population, invasions by microorganisms, or from being overwhelmed by other species, such as what happened to the Northern Spotted Owl from the migration of the Barred Owl.

Humans have no known predator that can affect their population unless earth is invaded by some powerful, extraterrestrial enemy that has designs on destroying us en masse.  Nevertheless, the human population can be directly affected by ecological changes (droughts, storms, exploding volcanoes, earthquakes, large meteor impacts, etc.), a lack of resources (food and energy) to support the current population, or an invasion by microorganisms (viruses, bacterium parasites) with no known cure.

Contrary to a popular myth promoted worldwide by radical environmentalists, academics, the news media and many governments, the human species is not going extinct from man-made global warming.  In a recent article by Tom Harris, he quoted noted climate scientist Dr. Tim Ball, former University of Winnipeg climate professor, asserting that “the probability that future global warming, if it occurs, will be dangerous to humans is about 2%.  Dr. Ball’s conclusions were supported by the 2015 report of the Nongovernmental International Panel on Climate Change (NIPCC) where they asserted that ‘no evidence exists that… (a warming of 2%, which the UN says we must avoid) would be net harmful to the global environment, or to human well being.'”

Dr. Ball went onto say that, “if dangerous global warming were to occur, the odds of it being caused by rising CO2 levels are effectively zero.”  (See “Climate“)

On the other hand, you might call a swarm of locusts harmful to humans.  But locusts are not a direct threat to human lives due to bites, viruses, parasites, or bacterium.  They are, however, a threat to the food source that humans eat.  The current swarms of locusts over Somalia, Ethiopia and South Asia are threatening to send those countries into extreme famine where millions could die from starvation.  A large swarm of locusts can eat upwards of 160,000 tons of food (320,000,000 pounds) each day.  The governments of these countries are too little and too late with preventive measures to save a large portion of the human population due to insane environmental policies.

So far, insects are more of a nuisance than a major threat to large populations of humans.  Yes, some are poisonous and can kill us, but only on a very small scale in comparison to the total human population.  Nevertheless, over one million people are killed every year from infected mosquitoes that deliver a deadly parasite with each entry into the skin by the mosquito’s tubular proboscis.  The parasite is called Malaria.

Many science-fiction movies have laid out what could happen if insects somehow mutated and became as large as humans.  In such event, insects would become the top of the food chain and humans would become their prey.  The likelihood of this event is essentially nil.

The onset of the Coronavirus pandemic has raised the question about humans’ vulnerability to a rapidly-moving, highly infectious virus that could overwhelm man’s ability to control it.  What if there was no known treatment for a virus or no known vaccine that could control the spread?  The scenario of a rapidly-spreading disease could raise the specter of the possibility of a human mass extinction.

Predictions of human extinction go back as far as biblical days.  But current scientists have applied the mathematics of statistics to the issue and have come up with some fairly wide predictions that range from one chance in 14,000 to one chance in 870,000 for a mass extinction to occur this year.  Nevertheless, it is not a matter of if, only a matter of when.

The most likely causes of a human mass extinction would come from either violent earth events, like super volcano eruptions, or from rapid climate change that could plunge earth into an ice ball, or from extraterrestrial events, namely meteors, comets, or asteroid impacts with earth.  One other possibility is that we will kill ourselves with an out-of-control nuclear conflict and engulf the planet in nuclear winter.

It must be remembered that over 99% of all animal, plant, insects, or birds have gone extinct in earth’s 4.5 billion year history.  Mankind will most likely suffer the same fate at sometime in the future.

Sadly, the explosion of earth’s human population spells a death knell for individual freedom and unalienable rights and the American idea of freedom.  Governments will have to become stronger and more centralized to control large population concentrations, as is happening today with worldwide infection of the Coronavirus.  Federal and state governments have instituted just short of martial law to control the spread of the virus.

In America, the government is spending trillions of dollars to support the very people they put under quarantine and out of a job.  Where is the money coming from? the taxpayer and borrowed or printed money.  We owe our very lives and livelihood to government.  That is control by government and opens up the very real possibility of government tyranny.

The move towards one-world government will accelerate until it is finally realized due to the pressures of national and international finance, energy, trade, commerce and agriculture.  The centralized world government will tell the people where to live, where to work, what to wear, what to eat, what to drink, what to drive, how far to drive, how much money they can have, what taxes they have to pay and how our money is to be spent.  They will control our money, our land, our water supply, our sewer, our transportation and our energy.  This will all be done under the guise of social issues, the environment, or public health and safety.  We covered this eventuality in our article entitled, “Demographics Will Eventually Destroy Our Founding Fathers’ Republic.”

Whether the human species goes extinct in the near future is up for grabs.  What is not up for grabs is the eventual and permanent loss of national sovereignty and individual freedom.  We’re well on our way.  Government virus control through mandatory quarantine is just another example of rising central government interference in our lives ….. in the name of public health and safety.

There are millions of Americans who will not bow down to this rising tyranny and they may have to pick up a SWORD to defend freedom.

Are Humans In The Throes of a Mass Extinction? added on Sunday, April 5, 2020

One Response to "Are Humans In The Throes of a Mass Extinction?"