CAN THE ECONOMY BE REVIVED? 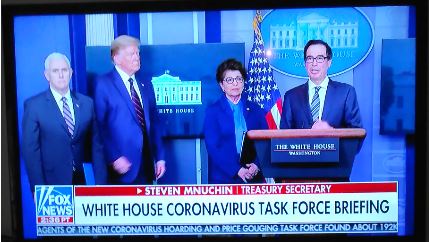 (Apr. 2, 2020) — The White House Coronavirus Task Force presser on Thursday began with President Trump stating that “We’re making progress” in medical treatments for the disease, including in the development of vaccines.

All Americans receiving Social Security will receive an individual payment as a result of the CARES Act passed last Friday without having to file a tax return to show income, Trump said.

He reminded business-owners that the “Paycheck Protection Program” will take effect tomorrow, April 3, to assist business-owners to maintain their business and workforce.  Small Business Administration (SBA) Administrator Jovita Carranza then detailed the program, which provides funds for small businesses of fewer than 500 employees to retain employees in the wake of the economic shutdown stemming from the coronavirus pandemic.  The program will be coordinated by local banks and will run for “six months,” Carranza said.

Treasury Secretary Steven Mnuchin said that he and Carranza have been working “until 4:00 in the morning” to simplify the application process and assured that checks will be available on Friday.

“When Obama sent out these checks, it took months and months and months,” Mnuchin said, referring to the “Stimulus Bill” signed in 2009 responsive to the then-economic downturn from the 2008 real-estate crash.

Mnuchin said that the PPP was designed to span approximately ten weeks.  He said he is focused on business-owners “getting their money quickly.”

Sole proprietors and contractors can apply for the loans, Mnuchin said, as of “next week.”  “Small charities” are also eligible for funding.

A provision of the CARES Act is that if the funds borrowed are allocated to employee retention and associated costs, the loan becomes a grant.

When Trump returned to the podium, he said he anticipates that many businesses will be able to again pay their employees.

More than 100,000 coronavirus tests are being conducted daily, Trump said. He is working to overcome challenges in the supply chain for ventilators, and General Motors will be “starting very, very quickly” to build ventilators, he said.

In New York City, COVID-19 patients will be separated from patients with other medical issues, Trump said, with the federal government agreeing to operate a separate COVID hospital at the Jacob Javits Center.  Trump invited medical professionals from areas outside of the “hot spots” of New York City, Louisiana and Dallas to offer their services where they are most needed.

Of Speaker of the House Nancy Pelosi’s announcement Thursday of a bipartisan committee to oversee the disbursement of CARES monies, Trump said that a “witch hunt” is not appropriate “during a pandemic.”

Trump said he underwent a second COVID test, the results of which were ready in approximately 14 minutes and were negative, as was his initial test.

Vice President Mike Pence spoke about the administration’s intent to see that medical professionals have adequate personal protective equipment (PPE).  He reported that more than 1.3 million coronavirus tests have been conducted nationally and that more than 5,000 Americans have passed away from the illness.

“Thousands of N95 masks” will be sent to New York City, he said, and 7,600 ventilators have been dispatched around the country.

Pence said that every person can assist others to obtain necessary treatment by observing the now-30-day plan to “slow the spread” of the virus.

Senior White House adviser Jared Kushner spoke for the first time, stating that he is obtaining “real-time data” from various U.S. cities.  He, too, is working on supply-chain matters, he said.  Pallets containing 200,000 N95 masks are on their way to New York City, he reported.

Joint Chiefs Vice Director for Logistics RADM John Polowczyk followed Kushner by describing in detail how he is procuring PPE to be flown in to the country on “airbridge flights” over the next two weeks.

He said that he has employed a “supply-chain tower” to inform as to what type of PPE is needed and that he took a call from Walmart, which expressed a desire to play a role in the process.  There are currently more than 200 companies offering their services, he said.

White House Trade Adviser Peter Navarro said that he is seeing “hoarding” of PPE and urged anyone possessing PPE to contact his office.  “We’ll give you a fair price for it,” he said.  He added that within “16 hours,” the Trump administration was able to supply the NYPD with PPE.

As he has before, Navarro stated that “buying American” and manufacturing drugs domestically is important to the administration.  “Never again should we have to depend on the rest of the world” for medical equipment and supplies, he said.