“MY FOCUS IS SAVING LIVES” 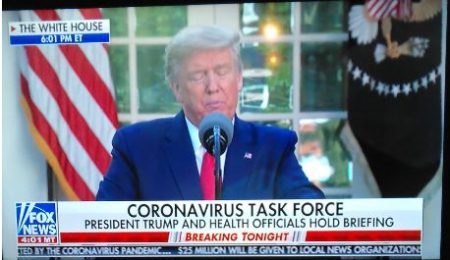 (Mar. 30, 2020) — President Trump began Monday’s White House coronavirus briefing by reiterating that the Task Force determined that the guidelines set forth initially for 15 days to stop the spread of the virus will be extended through April 30.  He also mentioned that the FDA on Sunday announced conditional approval of hydroxychloroquine and chloroquine for the treatment of hospitalized COVID-19 patients.

Secretary of Health and Human Services (HHS) Alex Azar reported that as of today, more than 1,000,000 coronavirus tests have been conducted in the U.S., more than in any other nation.

Trump lauded Darius, Honeywell, My Pillow, Jockey International, Procter & Gamble, and United Technologies for offering to manufacture much-needed medical equipment during the national crisis, after which each CEO described the products his or her company is now manufacturing.

Some of the companies indicated they have donated hospital equipment and materials to hospitals in addition to converting their facilities to manufacture them in the months ahead.

Following UT’s CEO, CMS Administrator Seema Verna spoke, extending her condolences to those whose family members have succumbed to the virus.  She announced that due to a prompt relaxation of federal regulations, “local communities” can “compliment and augment” federal agencies’ efforts to create temporary hospitals when needed.

The Medicare program will now be able to have nursing-home patients tested where they reside, she said.  “We are also allowing our hospitals to provide more support for our health-care workers,” she said, to include “meals, child care and laundry services.”

Verna added that Medicare has expanded its coverage of telehealth services to further reinforce social distancing, a pillar of the administration’s 15-day plan.

Trump retook the podium to state that the situation is very difficult but “we have to win.”  He said he has friends hospitalized from COVID-19 and that he “sees the numbers” each day.

On Tuesday, he said, the briefing will present various “stats” on the effect of the virus thus far.

Ten companies are now making ventilators, Trump said in response to a question from Fox News’s John Roberts, who asked if Trump was able to confirm that anyone who needs a ventilator will have one when the time arises.

Trump complimented the Navy for readying the two ships, Comfort and Mercy, deployed to New York and Los Angeles, respectively; the Army Corps of Engineers for building a field hospital in three days in New York City; and his administration in general for its response to the crisis.

He commented that Michigan has become “very hot” with increasing cases of the virus and lauded Hahn for the speed with which the FDA approved a new process to sterilize hospital masks.

Chanel Rion of OAN asked whether or not states should place coronavirus patients “above” “elective abortions,” which she said number over 2,600 each day, comparing it to the 2,400+ deaths incurred over two months from the virus.  Rion said that Texas and Ohio have temporarily suspended abortions in the wake of the need for medical facilities.

Dr. Deborah Birx said that “all the states are moving in exactly the same curve” regarding an increase in cases.  Therefore, she said, social distancing and other recommended measures must be practiced to prevent deaths.

When a reporter asked if the administration is “prepared” for the virus to recur “in the fall,” to which Trump answered in the affirmative, then referred to Dr. Anthony Fauci, Director of NIAID.  Fauci and Birx have said that as many as 200,000 Americans could lose their lives even with mitigation efforts.

“We have a vaccine that’s on-track” as well as other processes, Fauci said, and that the U.S. will benefit from “lessons learned.”

Russia and China have sent medical equipment, he said, and that America has “learned a lot.” “The concept of borders is important…we have done an incredible job…my focus is saving lives,” he said.

To a reporter’s question, he reiterated that the testing system has been updated from that which his administration inherited, complimenting Roche, which he said has been instrumental in that effort.  He told the reporter she should “congratulate” the administration for its work rather than ask about its alleged deficiencies.