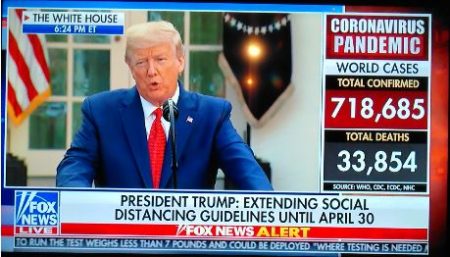 A “lightning-fast coroanvirus test” has been developed by Abbott Labs with results in five minutes, Trump announced, stating “We did it in four weeks.”  This coming week, “as many as 50,000 tests of that kind will be done,” Trump said.

The U.S. currently has a lower mortality rate than other countries, Trump said, because of what he said is now a high rate of testing.

He thanked the Army Corps of Engineers for quickly converting the Jacob Javits Center in New York City to a field hospital.  They will be building a field hospital in New Jersey soon, he said.

The malaria drug hydroxychloroquine is being used on an FDA-approved trial basis for 1,100 patients in New York City along with azithromycin, Trump said. “It’s very early yet; it started two days ago.  We’ll see what happens,” he said.  Trump then thanked FDA Commissioner Dr. Stephen Hahn, for the FDA’s swift approval of the test-use of the two drugs for coronavirus. “The FDA is also allowing the emergency use” of blood plasma from “who have already recovered from the virus…” and “transfusing it into sick patients,” he said.  “We’re having some early results that are good…Again, we got approvals in very, very quick time.”

He said the plasma treatments have shown promising results in other countries.

Regarding protective masks, Trump said that an Ohio company is preparing to begin the sterilization of used masks, a process which now involves the FDA.

“This is a tough one because it spread so quickly,” Trump said, after recalling the 1918 Spanish influenza pandemic which killed approximately 100,000,000 worldwide.

The main topic was the U.S. “supply chain” of necessary medical equipment.  “Vast orders” of PPE, or personal protective equipment, is being delivered to hospitals, Trump said, after which he called upon two CEOs of companies taking part in the effort to speak.  Each made brief remarks.

The demand for masks has increased tenfold, one of the CEOs said and which Trump confirmed.  The latter suggested to the reporters present that they should “look into this.”

Eighty tons of PPE arrived in the U.S. this morning, Trump said, with 50 more expected in the near future.

UPS’s CEO then spoke, thanking the president for his “leadership” and stating that her company is “very much involved” in the PPE delivery effort.

Regarding ventilators, Trump said, “many of the states are stocked up,” although he said some “won’t admit it.”

Trump recounted his visit to Norfolk, VA Saturday to see the departure of the medical ship USS Comfort to New York City.  The ship was undergoing maintenance, Trump said, but its dispatching to New York was moved forward by three weeks.

He recently spoke with restaurateur Wolfgang Puck and some of his colleagues, Trump said, and that his administration will “immediately start looking into the deductibility of restaurant meals” in order to assist the industry, which has been particularly hard-hit by the coronavirus shutdown.

Trump then reviewed some of the provisions of the CARES Act which he signed on Friday to revive the flagging U.S. economy totaling $2.2 trillion in aid.  Unemployment compensation will pass through state systems, Trump said, which he opposed.  “They’re not set up for that, and I didn’t want to do it, but our opponents wanted it…if they don’t get their money fast,…we’ll do something where we take care of it,” he said.

“Job retention loans with forgiveness” are part of the bill, along with $3,400 to the average family of four, he enumerated, among billions in grants and loans to small and large businesses.

As to the response of the nation to the crisis, Trump remarked, “Family bonds are strengthening…communities are rallying for the cause, and old divisions are fading away…”  He reported that studies show the vast majority of Americans are practicing “social distancing” and “remaining in their homes” as much as possible.

He said it was important that he stopped incoming flights from China and Europe earlier in the mitigation process.

“The peak of death rates is likely to hit in two weeks,” Trump said he has been told by his experts.  “During this period it’s very important that everyone strongly follow the guidelines,” he said, referring to the items set forth in his 15-day plan to “slow the spread” two weeks ago.  “The better you do, the faster this whole nightmare will end.  Therefore, we will be extending our guidelines to April 30,” Trump said.

He said a “very important meeting” will take place on Tuesday regarding “all of the findings, all of the data.”  He said that his team believes that “by June 1st,” the nation will be “well on its way” to recovery.

“With the grace of God, we are rising to the occasion,” he said at 6:11 p.m.  In the future, Trump said, a similar occurrence will not be as injurious to the United States.  “Together, we will defeat this invisible curse, this invisible enemy, and rise to new heights.”

At 6:15 p.m., Trump asked NIAID Director Dr. Anthony Fauci to speak about “mitigation.”  Fauci said that “the decision to extend this mitigation process until the end of April was a prudent one” prompted by the number of U.S. cases.

Dr. Deborah Birx, an infectious-disease specialist and member of the Task Force, said that “the model” with which the team has been working initially showed between 1.6 million and 2.2 million U.S. deaths without mitigation efforts.  “There will be a comprehensive piece presented on Tuesday,” she said, encompassing diagnostics and treatment.

Trump returned to the podium and said that the prospect of “up to 2.2 million deaths” reinforced his desire to sign the CARES Act on Friday.

The first reporter’s question was whether or not Trump made a “mistake” when he said he hoped the U.S. economy could be reopened by Easter Sunday, April 12.  He responded in the negative, stating that the date was “aspirational.”