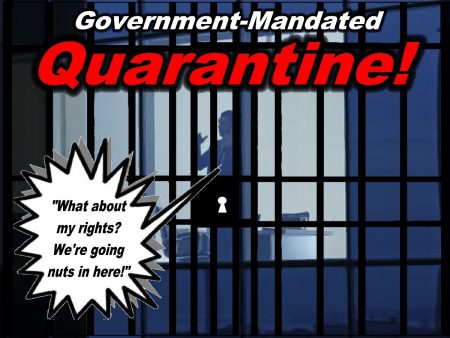 (Mar. 28, 2020) — It’s bad enough being cooped up in your home during the winter months.  Nevertheless, at least you can get in the car and go to the grocery store, a restaurant, a movie, the post office, a football game, or even a play at the local playhouse.  If there is snow on the ground, you can sled, ski, or ice skate.  You’re not restricted to out-of-the-home activities unless the weather is really bad.

But weather is something we can’t control.  It is a function of the tilt of the earth as it rotates around the sun that gives us our four seasons, winter being one of those seasons.  Government doesn’t mandate in-home quarantine just because the weather is bad.  They can suggest it, but they can’t demand it.

However, it is a whole other matter when the government tells you, in the name of public health and safety, that you can’t leave your home except for the major necessities of life like groceries, medicines, gas, or the bank, because of a highly infectious disease that requires massive quarantine of large sections of the population, or maybe even entire states, or even countries.  The decision by government to quarantine the people borders on martial law.  But government-mandated quarantines have serious consequences.

In fact, in one study of the effects of quarantine in the SARS epidemic, they found that “quarantine may create heavy psychological, emotional, and financial problems for some persons.  Knowledge and understanding of the experiences of quarantined persons are critical to maximize infectious disease containment and minimize the negative effects on those quarantined, their families, and social networks.”  (and the economy)

In another article on extended quarantine they stated that, “the uncertainty and stress of the global outbreak, spending time in quarantine can take a serious mental toll.  Part of the reason for this is the impact that quarantine has on three key elements of mental health: autonomy, competency, and connectedness.”

“The isolation imposed by quarantine frequently leaves people feeling that they have no control over the situation.  They also feel cut off from the rest of the world and unable to perform their usual duties.”

“As schools close, workers opt to telecommute, and other social events are canceled, the prospect of being confined to your home because of quarantine can be daunting.  Time seems to creep by much more slowly after you’ve been at home for a long period of time.  Even if you are home with other family members, the sense of isolation and cabin fever can be powerful.”

Staying home with the kids all day can be a real drag.  That’s why they invented school, isn’t it?  If parents are being forced to work from home, as they are now, they are being constantly interrupted by the wants and needs of their children, sending worker productivity into steep decline.  Kids, with pent-up energy, will take that energy out on anyone present, and the closest victims are their parents or each other.

If the parents are showing up for work, that leaves the kids home alone with no immediate babysitter or child care.  It is well-known that bad things can happen if children are left alone, without adult supervision.

All that aside, there is another factor that is hotly-debated about government-mandated quarantine, “individual freedom and unalienable rights vs. public health and safety.”  What always prevails in the debate comes from a quote from the old Star Trek series spoken by Mr. Spock wherein he said, “the needs of the many outweigh the needs [or rights] of the few.”

In government-mandated quarantine, one of the emotional effects (pain) is the loss of freedom, a cherished and imperative characteristic of a free society.  The question for government authorities is how to balance the “needs of the many” with the natural, God-given, individual rights to which all humans are entitled and the rights promised and enshrined into law by the first ten amendments to the U.S. Constitution.

One of those rights under the First Amendment is the “right to peaceably assemble.”  If you are quarantined in your home by a government mandate, the “right to assemble” just went out the window, since large crowds enhance the spreading of the virus, whichever virus it is.

The debate about individual rights and the “needs of the many” was well-framed in an opening paragraph of a treatise on the subject in which they wrote:   “To what extent can a state legitimately restrict the liberties of its citizens in order to serve the common good?  Furthermore, to what extent has the protection of the public’s welfare been a pretext for governments to curtail or erode fundamental rights?  These questions have formed the foundation of controversies and long-running debates about public health in the USA; conflicts that have been animated by a deep-rooted mistrust of overreaching authorities, concerns about arbitrary exercises of power, and by the anti-authoritarian ethos that is a historically prominent feature of US politics and civic culture.”

“In the state of Massachusetts (USA), a smallpox epidemic during the winter of 1901 provided the occasion for a legal challenge to the state’s compulsory vaccination law. This led to a landmark ruling by the US Supreme Court in the case of Jacobson versus Commonwealth of Massachusetts, which established the government’s right to use its ‘police powers’ in order to control epidemic disease.  In its seven-to-two decision, the Court affirmed the right of the people, through their elected representatives, to enact “health laws ‘of every description‘ to protect the common good.” (Colgrove & Bayer, 2005).

OK, but this begs another question: “How far will a government go to save us from ourselves, or the effects of a fast-spreading virus?”  The U.S. Supreme Court’s “of every description” is so broad as to leave the door of government control on public health and safety issues wide open.

How about living in squalid conditions?  Living homeless, poor and in squalor is an obvious threat to life, safety and public health, physical and mental.  Could not government come up with a legal reason to take all these people and put them in government-supplied and managed internment camps for their own good?  The answer is uncomfortably obvious!  Government did it to the Japanese for wartime reasons.   The Chinese are interning Uyghurs (Moslems) in Western China in enforced re-education camps.  What can the average citizen do, short of all-out war, to stop it?  Absolutely nothing!

Unfortunately, the current extended quarantine could end up thrusting the American economy into a deep recession, if it hasn’t already.   Government’s efforts to soften the massive quarantine blow with huge injections of cash into the economy come with their own pain, the ever-rising national debt.  (Virus and quarantine relief, Phase one, $8.3 Billion; Phase two, $100 Billion; and Phase three, $2.2 Trillion)

America’s national debt now stands at well in excess of $23,000,000,000,000 (that’s trillion), fueled by never-ending budget deficits from excessive social spending ($984 Billion for fiscal 2019).  The national debt in 2018 equaled around 78% of the Gross Domestic Product (GDP).  It is forecast to reach an unsustainable 180% of GDP by 2050 with no chance it will ever be paid.  If interest rates ever go up, and they will, taxpayer payments to the national debt could eclipse the defense and entitlement budgets.

What about the science of viral infection?  There seems to be no question about the science of the rapid spreading of a virus in the general population.  The real question is, are the government’s quarantine actions too much or too little?  Does anyone really know?  Of course not!  Government operates off of what is called the “precautionary principle,” “a strategy of approaching an important issue of potential harm when extensive scientific knowledge on the matter is lacking” in an abundance of caution.  They are applying the same “logic” to Climate Change.

Here is another issue.  Some viruses spread faster than others, like the Coronavirus, with a significant mortality rate.  Does not government have a duty and responsibility to preserve the “needs of the many” through government-mandated quarantine in the event of a fast-moving virus that takes lives on a large scale?  Of course it does.  But the power to do so bears an awesome responsibility to not take such measures to their extreme where individual freedom and unalienable rights are the first casualties, never to return.

Once the people bow down to government’s authority to rob them of their freedom and do nothing to hold government accountable, change government’s behavior, or stop them in their tracks, the people’s freedom is lost forever.  That is what is at stake in the debate over government-mandated quarantine.  The loss of individual freedom is one of the worst and most long-lasting “pains” of government’s actions to save us from ourselves or the demons of unseen viruses.

Short bouts of being cooped up in your home are bad enough.  But the loss of your freedom permanently because Americans have grown accustomed to centralized government control may never be recovered and may become a “pain” (enslavement) that must be endured in perpetuity.

But if government goes too far in restricting individual freedom to protect us from the dire effects of a deadly virus or some other reason to save us from ourselves, could that not lead to “Civil War?“

The Extreme Pain of Government-Mandated Quarantine added on Saturday, March 28, 2020

One Response to "The Extreme Pain of Government-Mandated Quarantine"