“THE GOVERNORS HAVE BEEN GOOD, EXCEPT FOR A COUPLE” 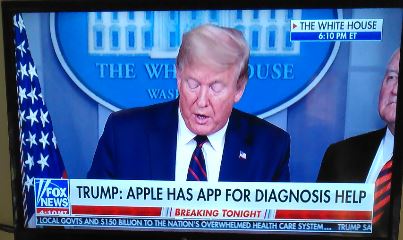 (Mar. 27, 2020) — At Friday’s White House Coronavirus Task Force briefing, President Trump announced that he invoked the Defense Production Act (DPA) to compel General Motors to produce ventilators, as it had promised but reportedly altered its anticipated output from 40,000 to 6,000.

Over the next 100 days, Trump said, “we will either make or get in some form over 100,000 additional units,” referring to ventilators. He said that “thousands and thousands” have already been sent to New York and that others are “in a warehouse” in New Jersey for New York facts of which he said New York State officials were unaware.

Boeing is currently producing face shields in the effort to defeat the coronavirus, Trump announced.

“Thousands of experienced service members” may be activated to serve in the National Guard, he reported.

He said the $2.2 trillion bill he signed earlier Friday “goes to $6.2 trillion depending on needs.”  “It’s the largest bill ever signed,” he said.  He thanked Republicans and Democrats for “coming together” to pass the legislation in order to help companies and individuals work through the financial crisis caused by the coronavirus and social-distancing mandates.

Trump often referred to the coronavirus as “the invisible enemy.”

As for “pharmaceuticals,” he said the government is “working on cures,” medicines and vaccines to combat the coronavirus.

He said that the Task Force is compiling “very accurate information” as to areas of viral concentration.  “Hopefully we’re going to win soon and with as few as possible lives lost,” he said.  “We’re all in very strong communication,” he said of other countries affected, of which there are approximately 150.  “At the right time, we’ll be distributing that equipment to other countries,” he said, referring to the increased number of ventilators expected to be produced in the U.S.

In response to a question from Fox News’s John Roberts about the DPA and GM, Trump said, “We have to get these people on-board” in producing ventilators.  He expressed his unhappiness that GM moved much of its auto production overseas over a number of years, particularly from Ohio.

To ABC News’s Jonathan Karl, Trump said that he hopes New York’s stated need for 30,000 ventilators is “high” rather than accurate.  “We sent thousands of ventilators to New York and they didn’t know about it at the time they were complaining…We want to have so many that we do have more than we need so we can send them to other great countries,” he said.

When Karl pressed about Trump’s view of Inslee, Trump said he wants Inslee to “be appreciative.”  “We have the Army Corps of Engineers so teed up…they’re in there screaming, ‘Get it done!'” Trump said, claiming that “the states” are responsible for some of what the federal government is doing.

“The governors have been good, except for a couple,” he further told Karl. He then said he has advised Vice President Mike Pence, who leads the Task Force, “Don’t call the governor of Washington; don’t call the woman in Michigan.”

As for reopening the country for business, Trump again expressed hope that it will be “weeks” from now, rather than “months.”  “The people have been incredible; when you talk about social distancing…I think they really are afraid, and they want to win this thing,” he said.

As for the national recovery, Trump said, he is bringing in “brilliant people” from Wall Street and elsewhere to work with his administration in order to assist the airlines.  “We have the smartest…people like Larry Fink…and they all want to do it. They love this country; they all want to do it,” he said.

Trump said he “wants to preserve airlines” in addition to people’s jobs.  “Saving the airlines is very important.  The airlines were doing record business a month before today, let’s say…Last year they had a record year in the history of the airlines.  I was presiding over the most successful economy in the world, and now we’re going to have to rebuild it.”  He said he is looking forward to “an explosion” in economic growth in the fourth quarter of 2020 or perhaps later.

Another reporter asked Trump what he would say to restless children whose schools are closed, to which he responded that children should “listen, behave, wash their hands,” and learn from what is transpiring. “Ultimately, we’re doing it for them,” he said.  “Tell them to be very proud of the country,” he added.

Trump surprisingly told a reporter that overall, “the media has been pretty fair” in its coverage of the crisis.

He said he has had “incredibly productive” conversations with New York City Mayor Bill de Blasio despite his different political “persuasion.”  “I’ve spoken with Mayor de Blasio a lot in the last week…and I get along with him very well.  He wants us to do certain things, and we’ve produced,” he said.

“We’re building many portable hospitals,” Trump said of his administration, in California, Washington State and New Jersey.  “We’re also taking over buildings, and the city will go in, or the state will go in…and make it so that it’s hospital-functioning. This is normally done by governors…but we’re doing a lot of that, and they’re doing a great job; mostly done by Army Corps of Engineers and FEMA.”

Trump responded to NBC’s Peter Alexander that many ventilators have been acquired by the federal government.  “When I took this over, it was an empty box,” he said of “stockpiling” and “testing.”  “None of them ever thought a thing like this can happen,” he said of former presidents.  “If we need them in New York, they’re going to get them.”  He then said that companies which agreed to make them are “going to go around the clock.”

“Normally these would be bought by states…nobody was prepared for this.  What we’ve done, nobody can imagine,” Trump said.