At Thursday’s Briefing, Trump Predicts Return to Business in Near Future

“HOW THE WORLD HAS CHANGED” 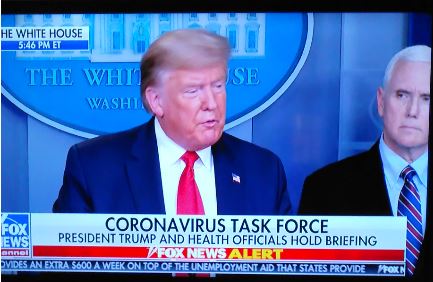 He reported that in the morning, he spoke with more than 20 world leaders, including United Nations Secretary General Guterres and WHO Director Dr. Tedros Adhanom Ghebreyesus.

Following that, Trump said, he spoke with all 50 state governors and that the content had been made public, telling the press members in the room that he “wished the news could be real.”

He congratulated the U.S. Senate for approving on Wednesday night, 96-0, a coronavirus “stimulus” bill designed to rescue the U.S. economy by infusing American citizens, small and large businesses with cash to replace their lost salaries in the wake of the national virtual shutdown.

Hospitals will also receive billions if the House of Representatives passes the bill.

Millions of masks have been sent to hospitals which need them, Trump said, and he commended healthcare professionals for their work during the crisis.

He said the U.S. Navy ship Comfort will be leaving from the Norfolk Naval Station Saturday for New York Harbor to arrive on Monday.  “I’m going to go out and kiss it goodbye, and I will go and we’ll be waving together, because I suspect the media will be following…” Trump said.  “There’s something very beautiful about it,” he further commented.

Trump said that various “treatments” for coronavirus are under study now.  “I think we’re doing very well with regard to the vaccines…but we’ll have to see what happens,” he said.

“Every American should be proud of the spirit we’ve brought to this effort,” he said.  “We’re waging war on this virus” using a variety of resources, he said.  He then thanked the American people for practicing “social distancing” as part of his administration’s plan to “stop the spread” of the virus.

The administration will be sending a letter to all 50 governors outlining “guidelines” for the reopening of businesses, Trump said.  “We’re going to have a lot more information early next week…we have to go back. This is the United States of America.  Our country has to go back to work; our country is based on that.  I think it’s going to happen pretty quickly.  We may take large sections of our country that aren’t seriously affected…we’ll be talking to you a little more next week.”

He then took questions, during which he stressed that “the virus came from China.”  He said that the trade agreement made with China prior to the outbreak will benefit the U.S. “We’ve made unbelievable trade deals,” he said, with Mexico, South Korea, Japan and China, among others.

He will be speaking to Chinese President Xi at 9:00 p.m., Trump said.

In response to a question from Fox News’s John Roberts about reopening businesses in certain parts of the country, Trump said that Dr. Deborah Birx and NIAID Director Tony Fauci will be addressing the issue “in a few minutes.”

Regarding the number of fatalities thus far in the U.S., Trump said he was given “numbers that were much higher” when the pandemic began.  “That’s one of the reasons I say, we’re going to beat this and we’re going to go back to work.”

At 6:06 p.m., Trump said he would return on Friday for the daily presser and made his exit, turning the briefing over to Vice President Mike Pence.

Pence said that “major disaster declarations” have been issued for some half-dozen states.  He also reported that the House is expected to begin debating the stimulus bill at midday Friday.

More than 500,000 coronavirus tests have been administered thus far, Pence said, and thanked the American Hospital Association for compiling results to be sent to the CDC.  A “point of care” test has been devised and will be available in the near future, Pence said.

In addition to millions of N95 and surgical masks, the administration and states are working to locate “tens of thousands” of ventilators, Pence reported.

The New York City area has been hardest-hit, Pence said, and again recommended that anyone who has spent time there take his temperature and self-quarantine for 14 days.

He spoke about the “record unemployment numbers” reported this morning as a result of the national shutdown but emphasized that CVS, Pizza Hut, Walmart and other stores are hiring employees in large numbers.  Anheuser-Busch is donating $500,000 to the coronavirus battle, Pence said, along with other entities he said are “being most generous.”

By using the administration’s 15-day plan, Pence opined, “we will slow the spread, and we will heal our land,” similar to his concluding remarks from other pressers.

Dr. Birx reported that there are 19 states which to date have incurred fewer than 200 coronavirus cases.  The “hot spots are in urban areas or in communities that serve that urban area,” she said.

“New platforms” of testing are being added, she said, which will “match the need to the county and state.”

About 14% of those tested are confirmed as having the virus, Birx said.

She reported that there are hospital beds and ventilators as yet unused and stressed that there is no need for Americans to rush to prepare “DNR” directives.  “There’s no reality on the ground where we can see that 60-70% of Americans are going to be infected…” she said, in keeping with predictions that have been made.

Fauci then spoke about “interventions” relating to what he said could be a “rebound” of the virus.  To prepare, he said that the development of vaccines is under way, with one under a “Phase 1 trial.”   “That takes about three months, maybe more,” Fauci said.  A vaccine will likely not be available for 12-18 months, he said.

As for “therapies,” he said, “the best way to get the best drug as quickly as possible is to do a randomized, controlled trial…” Fauci explained.  He said he believes that an effective therapy will be developed for the next flu season.

Returning to the podium to answer questions, Birx said that “outbreaks and clusters” have been identified within America’s states and counties and that the Task Force is working on the “granularity” of gathering all of the data to go to the president.

Pence said that the Task Force will be presenting Trump a number of recommendations for “going forward” “based on the data.”

Some governors have asked for additional assistance for their states, Pence said. He adjourned the presser at 6:38 p.m.

At Thursday’s Briefing, Trump Predicts Return to Business in Near Future added on Thursday, March 26, 2020