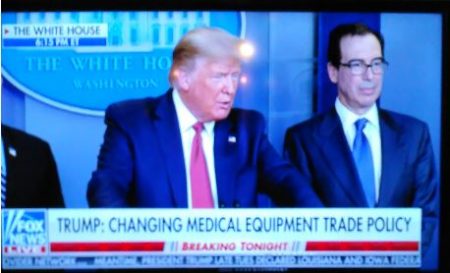 Trump said that “social distancing” and the other measures his administration has asked Americans to take have been effective in slowing the spread of the potentially-deadly virus.

He said that “hot spots” for the virus are New York Washington State, California, Iowa, and several others.  More than 55,000 people have tested “positive” for coronavirus, Fox News reported at the same time, with over 800 deaths.

Trump praised the work of New York Gov. Andrew Cuomo, who on Tuesday was very critical of Trump’s dispatching of ventilators in the wake of an explosion of cases in his state.  During his presser Wednesday, Cuomo appeared more amenable to what the Trump administration is doing to help New York, particularly New York City.

Trump also reported that he “just spoke with President Moon” of South Korea, which was able to contain its coronavirus infection and death rate by taking early extreme measures.

The bill contains $300 billion in “direct payments,” Trump said, and has “up to $250 billion” for expanded unemployment benefits not currently available.  “Over $100 billion” is allocated to hospitals and physicians, he said, and $45 billion to supply the national stockpile of medical equipment, which he said “was very depleted, like everything else.”

“There is a ban on corporate stock buybacks,” Trump said, something he said members of both political parties “wanted.”  Of the U.S. economy, Trump predicted that it will “open up like a rocket ship” once the virus is defeated.  At the time of this writing, the Senate has not yet approved the bill, nor has it gone to the House for its review.

The sum of $500 billion will be allocated to “the hardest-hit industries,” Trump said.

“Non-profits” have been “fantastic” throughout the emergency, Trump said, providing examples of Americans across the country volunteering to provide childcare for medical workers, deliver groceries and supplies to vulnerable populations, and found other ways to assist others.

He said that Cuomo and New York City Mayor Bill de Blasio were “happy” that FEMA sent 4,000 ventilators to the city given the sharp rate of new infections in recent days.

At 6:08 p.m., Trump turned over the podium to Treasury Secretary Steve Mnuchin, who thanked Senate leaders for their work on the bill under consideration.  “We couldn’t be more pleased with the unprecedented response from the Senate to protect American workers,” Mnuchin said.

He said the bill contains loan money to companies which will be forgiven if the employers retain employees and follow other guidelines.  There are also “tax incentives to retain workers,” he said, and “direct payments into most people’s account.”

Later, Mnuchin added that he believes the Senate will approve the financial package Wednesday night and that the House will take it up on Thursday.

Answering reporters’ questions, Trump said that being dependent on other nations for “survival” has a poor outcome for the U.S.  “They’re all playing games against us, and no president has ever done anything about it,” Trump said.  Providing the example of manufacturing of medical equipment, he said, “All this is changing.”

One reporter asked Trump if he wants the American economy to reopen by Easter, as he has stated over the last two days, for “political” considerations.  Trump responded that he believes some in the media want him to fare “poorly” in the election and desire the economy to remain shuttered to that end.  He told the reporter and another sitting nearby that they “write fake news.”

When another journalist asked how many deaths are “acceptable” to him, Trump said, “None.”

He said that testing for the coronavirus is not necessary for everyone, particularly in areas which are not “hot spots” and that the procedure has been streamlined in an unprecedented way during the unfolding of the crisis.  “We’re getting exponentially better,” Trump said.

At 6:29, NIAID Director Dr. Anthony S. Fauci answered a reporter’s question about the World Health Organization’s (WHO) handling of the coronavirus pandemic and whether or not its director, Dr. Tedros Adhanom Ghebreyesus, is biased in favor of China as some have reported.  To that, Fauci said he vouches for Tedros’s integrity.

As for Trump’s desire to reopen the country for business by Easter Sunday, April 12, he said, “We want to go quickly. The longer we stay out, the harder it is to bring this incredible…if Steve gets the deal done, it’s going to take care of people…”  However, he said he will not do anything “hastily” and will confer with the doctors and others on the Task Force before making a decision.

At 6:34, Trump announced his departure and turned the presser over to Vice President Mike Pence, who has been leading the Task Force.

Pence said that the nation is “ten days into” Trump’s 15-day plan to “slow the spread,” which stresses social distancing, frequent handwashing and other measures to “significantly impact the rate of growth” of the curve representing the increase in cases.

Pence said that a FEMA report says that “hundreds of companies” have volunteered to retool their operations to manufacture medical equipment and other needed supplies.

He thanked all teachers who are now educating children through distance learning and said that Education Secretary Betsy deVos will appear at Thursday’s presser along with Agriculture Secretary Sonny Purdue to speak about the new educational environment and school lunches, respectively.

Pence also praised governors for their leadership.  FEMA has  a “technical assistance” team going to New York City on Thursday, he said, and that a similar team is already working with California Gov. Gavin Newsom.  “We’re going to continue to work with you,” Pence pledged, meaning the states.

Regarding supplies, Pence said the administration is tapping various sources to procure them for places which need them.  The CDC will be soon releasing guidelines, he said, on the use of national parks while practicing social distancing.

“There’s nothing more important for the American people to do to slow the spread…to put into practice the 15 days to slow the spread,” he said at 6:41.  He said the risk of serious illness to most Americans “remains low” while repeating that those who are “immuno-compromised” or have preexisting conditions are considerably more vulnerable.

Dr. Deborah Birx said that outbreaks of influenza over this past winter are being studied along with coronavirus cases to look for discernible patterns.

She said that social distancing is very “important” as part of “the role” each American plays in protecting other people.  She related that her grandmother “brought home the flu” to her mother, who had just given birth and “succumbed” to the virus.  Birx said that her grandmother was forced to “live with” that knowledge “for 88 years.”

Fauci then retook the podium to relate new information he received from the WHO:  “Our Chinese colleagues are very concerned…what they’re starting to see, as they’re relaxing the constraints on travel,” is “imported cases,” he said.  The U.S. is learning from the case-number patterns which occurred in other countries,” Fauci reported, adding that warmer countries now entering their winter season could signal a return of the coronavirus in the “next cycle.”  His hope, he said, is to have “a menu of drugs” to combat a second cycle of the virus.

Questions and answers continued through 7:06 p.m., when Pence adjourned the press conference.