“OUR COUNTRY WANTS TO BE OPEN” 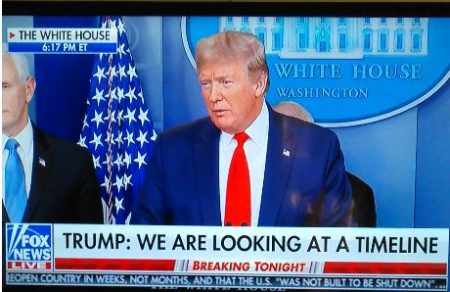 (Mar. 24, 2020) — At Tuesday evening’s White House Coronavirus Task Force briefing, President Trump reiterated his expressed desire to reopen America for business by Easter, which he said “is a special day for many reasons.”

He said that timeline will be under constant review by medical and other experts as the coronavirus pandemic which began in China unfolds across the nation.

The Army Corps of Engineers and National Guard are erecting field hospitals and medical facilities in New York State, he said.  A Navy hospital ship “will be arriving in New York Harbor” soon, Trump said.  A second Navy ship is en route to Los Angeles.

He expressed optimism about a financial-relief bill under debate in the U.S. Senate which failed on a procedural vote twice.

Experts are working on “a sophisticated plan to reopen the economy,” Trump said at 5:51 p.m.  “Our decision will be based on hard facts and data as to the opening,” he said, referencing “that beautiful Easter Day.”

Trump said that “the spirit” between his administration and “the governors,” who have participated in a number of conference calls, is very positive.

He said the coronavirus crisis has shown that “without borders, you don’t have a nation,” and that the U.S. cannot be dependent on “any other nation” for medicines and other necessary products.  “We will be dependent on none,” he said.

He said that “every day,” Americans are demonstrating ingenuity and “a spirit that can never be broken” even as businesses remain shuttered in most states.

White House Coronavirus Response Coordinator Dr. Deborah Birx, who participated in a Fox News virtual townhall presentation earlier in the day with Trump, Vice President Mike Pence and Surgeon General Dr. Jerome Adams, provided an update on coronavirus testing.  She said that a new procedure, self-swabbing, will reduce the amount of “PPE,” or personal protective equipment, needed by medical professionals processing the tests.  The “backlog” is in the process of disappearing, she said. “We will let you know when we’ve reached that equilibrium.”

Birx said that 60% of new cases are coming from New York City and that residents there “have to be following the presidential guidelines,” meaning the 15-day plan to “slow the spread.”  She recommended all residents place themselves under quarantine for 14 days, including those who live in the city but traveled elsewhere within the last few weeks.

NIAID Director Dr. Anthony Fauci said that the team is in the process of identifying and studying “hot spots” of the virus.  “You’re going to be hearing more about how we can inform, where we’re going,” he said.

As for New York City, he said “it’s understandable” that people “want to leave New York.”  He added that approximately one in 1,000 people from NYC is infected.

Regarding “off-label drugs” which could work for coronavirus, Fauci said that “randomized clinical trials” are being “queued up” for certain medications to determine their safety.

National Economic Council Director Larry Kudlow then spoke and stressed the need for legislation to provide relief to small businesses, employees, and “approximately $3,000 for a family of four” as the current bill is envisioned.  He emphasized that the financial crisis was brought on by the coronavirus medical crisis and that the economy was sound prior to that.

There will be tax deferrals and other forms of relief, Kudlow said.  “The total package here comes to roughly $6 trillion” and will be the largest relief bill in the history of the United States, he revealed.

Trump then retook the podium and praised the proposed relief package which he said will “help Boeing,” the airlines and cruise lines, which were heavily-impacted by the ordered shutdown due to the virus.

Pence reported that the “15 days to slow the spread” initiative is working.  “If every American would embrace thees guidelines, we could significantly reduce” the exposure to others, he said.

He said the “public-private partnership” set up by the administration has enabled testing to ramp up significantly.  “We’re particularly focused on New York,” he said, and repeated Birx’s stated statistics for the region.  “It is the reason why today the White House Coronavirus Task Force is calling on any American, first and foremost, if you’re in the NYC metropolitan area, to take the guidelines we’ve offered…”  In addition, Pence echoed Birx’s request for New York City dwellers currently in other areas of the country to self-quarantine.

FEMA is distributing ventilators, surgical masks, and other PPE to New York and Washington State, he reported.  “We’ll continue to surge those resources and make sure they’re available.”

As to the Defense Production Act which Trump invoked last week, Pence said that private companies have offered to help in a variety of ways.  Apple Computer, he said, is donating nine million masks to hospitals and the national stockpile.

Regarding reopening main street businesses, Pence said “we will get to that day quicker if every American” practices the 15-day program for slowing the spread.

Trump then took questions from reporters.

To a question from Fox News’s John Roberts, Trump said he is optimistic that “a large part of the country” might be open for business by Easter, after which he called upon Fauci to add his thoughts. Fauci said that “flexibility” must be applied to different parts of the country by “looking at the data.” He said that medical experts need more information on areas where the outbreak was not severe.

To the question, “Is New York becoming the epicenter?” Trump responded that it is “a very hot spot.”

“Our country wants to be open; our people want it to be open,” Trump said.  He thanked White House Trade Adviser Peter Navarro for his efforts with private companies to produce and deliver PPE where it is needed.

At 6:24, Trump abruptly said, “…and I’ll see you all tomorrow,” after which the team filed out of the White House briefing room.

The U.S. has incurred approximately 50,000 infections and nearly 700 deaths as of Tuesday evening, Fox News reported following the conclusion of the presser.

Update, 6:58 p.m.:  JusttheNews has posted the video of the briefing.