Trump: Administration of Medications to Coronavirus Patients to Begin Tuesday

“DELIVERED” WHERE, AND HOW MUCH? 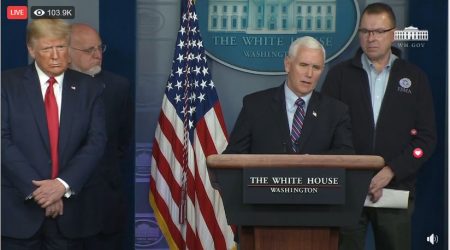 (Mar. 22, 2020) — During a Sunday evening press conference, President Trump announced that the “delivery” of certain medications intended to lessen the severity and duration of the coronavirus will begin on Tuesday.

He did not specify the medications nor where they will be “delivered.”

At Saturday’s White House Coronavirus Task Force presser, Trump expressed optimism about chloroquine, a medication already approved for the treatment of malaria and reported in some preliminary studies to be helpful in reducing the length and easing the symptoms of coronavirus.

On Saturday, Trump had said that Americans need to “pray to God” that the as-yet-experimental medications for coronavirus will be effective.  At the same time, NIAID Director Dr. Anthony Fauci said that there is no conclusion that chloroquine is effective for coronavirus but that he understood Trump’s expressed optimism for treatment options.

Earlier on Sunday, a Hawaii-based actor reported on video that his coronavirus symptoms were eased by a combination of chloroquine, Tami-Flu, and azithromycin, as reported by The Gateway Pundit.

The states of Washington, California and New York requested special disaster designations, Trump said, two of which he said he granted earlier today, with California’s to be signed later on Sunday.  New York City now has the highest number of confirmed cases, with deaths having increased rapidly over the last several days.

“We’re getting what we need without putting the heavy hand of government down,” Navarro said at 6:25 p.m.

Vice President Mike Pence, who is leading the Task Force, said that testing has increased each day and that the “backlog” is expected to resolve by Wednesday.  Many Americans have been tested with “negative” results, Pence said.

A new test for the disease will be unveiled by the end of the month, the vice president reported.

Pence also thanked the American people for practicing the administration’s recommendation of “social distancing” in keeping with the 15-day plan to “slow the spread” of the coronavirus.

As of Sunday afternoon, the U.S. had suffered 360 deaths.  Trump has recently referred to the fight against the coronavirus as “a war.”

The USN “Mercy” and “Comfort” are heading to Los Angeles and New York City, respectively, to render medical assistance, Trump detailed after stepping to the podium to answer reporters’ questions.

FEMA is now leading the federal government’s coronavirus response and will be funding the deployment of National Guard troops in the three most-affected states, Pence reported.  Based on the constitutional concept of “federalism,” Pence said, the states’ governors will have authority over those troops.  Trump said that the federal government’s relationship with those states’ governors, who were previously Trump’s political opponents, has recently been “great.”

FEMA will be building temporary medical facilities in those states.

To a reporter’s question, Trump responded that his administration is “looking at” the possibility of releasing “elderly” federal prisoners as a result of the coronavirus emergency, stressing that if approved, such prisoners would have to be “totally non-violent.”

Trump said that although the U.S.-China relationship is still “very good,” he would have appreciated China’s informing the U.S. of the “problem” of coronavirus, which arose in Wuhan, China in December or earlier and now has spread to approximately 150 countries.  Italy and Iran have been particularly heavily-impacted.

Regarding an aid package for American citizens due to the economic downturn, Trump said he expects there to be no roadblocks.  “I think you’ll get there; to me, it’s not very complicated.  We have to help the worker; we have to save the companies.  As soon as we’re finished with this war, our country is going to bounce back like you’ve never seen before,” Trump said.

A question arose about a female American citizen held by a foreign government who is now “out, and back with her parents,” Trump said, stating that it is important at this time to keep some of the information “private.”  The woman was “badly abused,” he said, and Joint Chiefs Chairman Gen. Mark Milley was instrumental in securing her release, Trump said, praising him highly.

In response to a reporter’s question, Trump revealed that the chloroquine will be sent to New York and that he believes its administration to patients will begin “Tuesday morning.”  He said “strong evidence” indicates that the medication could be helpful to coronavirus sufferers.

Surgeon General Dr. Jerome Adams said that anyone with “symptoms” will be tested. As for “illegal aliens,” Trump said, “I think it’s important that we test those people.”