“WE THINK WE HAVE SOME GOOD ANSWERS” 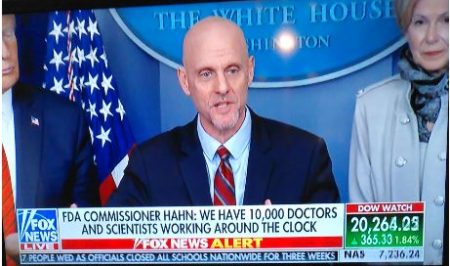 (Mar. 19, 2020) — At the White House Coronavirus Task Force briefing Thursday, President Trump announced that the FDA is now able to approve a drug commonly used for malaria for the treatment of coronavirus for dispensing by prescription “nearly immediately.”

Trump praised the FDA and its commissioner, Dr. Stephen M. Hahn, who stood behind Trump as he made the opening remarks.

At the opening, Trump said that “anti-viral therapies” are under development and that “We think we have some good answers” in regard to the coronavirus pandemic which arrived in the United States approximately January 21 from Wuhan, China.

At 11:49 a.m., Trump acknowledged that a strong economy was “stopped” by government recommendation due to the rapid spread of the virus.  “It’s a medical war; we have to win this war; it’s very important,” Trump said.  He then introduced Hahn and again praised the FDA’s rapid progress.

Hahn said that the FDA has 10,000 scientists and medical experts working on new drug therapies and other medical breakthroughs.  Hahn said he previously treated cancer patients.  “That part of me has not left” as FDA commissioner, he said.

“We have unbelievable innovators,” Hahn said.  “We are incredibly blessed as a country to have this.”

He said that “compassionate use,” which Trump had mentioned, is an option the FDA can utilize which goes beyond the “Right to try” executive order Trump signed approximately 18 months ago.

Hahn said that the FDA is currently examining drugs already on the market to treat other ailments.  He said the FDA began working on potential treatments for coronavirus from the beginning of the outbreak.

Following Hahn, Vice President Mike Pence gave an update on coordination between the Task Force and the nation’s governors.  He said that on testing, all state and private laboratories must report results to the CDC.  A bill passed Wednesday which Trump signed makes all coronavirus testing free of charge to Americans.

Honeywell, 3M and other companies are mass-producing industrial masks in the millions for hospitals, Pence said.  Regarding ventilators, Pence said the government is “increasingly confident” that enough ventilators will be available as the coronavirus “makes its way across America.”

He stressed the “15-day” program the Task Force outlined on Monday, which includes “social distancing” and stringent hygiene.  “I know, on this first day of spring, that we’ll all get through this, and we’ll get through this together,” Pence said in closing.

Surgeon General Dr. Jerome Adams praised the FDA for “doing things that have never been done before.”  He urged young people to give blood if possible.  “Social distancing does not have to mean ‘social disengagement,'” Adams said.  “You might even save a life.”

Trump then took questions from reporters, the first of which came from ABC’s Jonathan Karl.

One Response to "“Anti-Viral Therapies”"