“IT COMES FROM CHINA” 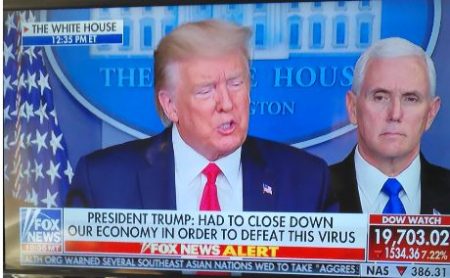 (Mar. 18, 2020) — Beginning just after noon Wednesday, the White House Coronavirus Task Force provided an update on what President Trump, at the outset, termed “the Chinese virus.”

Trump said he is invoking the Defense Production Act in order to allow for the increased production of necessary equipment to meet “national security” needs.

He also said that new testing which individuals could administer to themselves is in development and that FDA approval will be done on an expedited schedule.

Terming the fight against the coronavirus “a war,” Trummp said he has a meeting with “nurses” currently treating patients.  Trump described the nurses as “heroes.”

“It’s the invisible enemy; it’s always the toughest enemy,” Trump said of the coronavirus.  When eradicated, he said, “It will be a total victory.”

A second presser on Wednesday or Thursday will provide more information on work the FDA is doing in relation to the pandemic, Trump said.

Travel not involving trade has been mutually suspended between the U.S. and Canada, Trump had tweeted earlier.

At 12:16, Vice President Mike Pence reported that “testing” has increased as a result of the “public-private partnership” between the federal government and private enterprises such as hospitals and pharmaceutical providers.  People not experiencing symptoms of coronavirus should not be tested, Pence said.

Military officials will be detailing what they expect to  be doing as a result of Trump’s signing of the DPA.

Dr. Deborah Birx spoke about new “data” from Italy and France showing that some younger victims of the virus are, in fact, becoming more seriously ill than was previously thought.  As she did previously, Birx asked millennials to “help” and “protect each other” by avoiding interaction in large groups.

On testing, Birx said, “a lot of our solutions” depend on “the private sector.”  “Positive” test results have increased, she said, to about 7%.

Defense Secretary Mark Esper spoke about the military’s capabilities to defend the nation outside of the coronavirus.  The military will make available 5 million special masks known as “N95s” for civilian use, he said, and reported that 16 military labs are now operational to process tests.  Leaders of the Army Corps of Engineers are meeting with New York Gov. Andrew Cuomo today, Esper said.

“Our nation’s security remains our top priority,” he said.

CMS Administrator Seema Verna discussed “telehealth,” or communicating with a healthcare provider over the internet rather than in person, a benefit now covered by Medicare so as to avoid person-to-person contact.  CMS will be issuing new recommendations for “non-essential” medical and dental procedures which she said will reduce “unnecessary exposure” to patients.

Department of Veterans Affairs Secretary Robert Wilkie reported “restrictions” to visitors to VA hospitals and treatment facilities and a reduction by one-third of routine medical appointments.  He said part of the VA’s mission is to support FEMA and other agencies to protect the nation.

Trump then took reporters’ questions, the first of which asked if it were accurate that the unemployment rate could reach 20%.  Trump said he “did not agree” with that figure “at all.”

The same reporter challenged Trump to explain why his term “Chinese virus” is not “racist,” to which he said that “it comes from China” and that he objects to China’s claim that U.S. soldiers spawned the deadly disease.  He said he has “great love” for all Americans.

Fox News’s John Roberts “what size the checks” will be stemming from legislation Congress is considering passing to deliver economic relief to all Americans.  The economic impact includes business and school closures, layoffs, a massive reduction in airline flights, a shutdown of the cruise-line industry, and a significant impact on the hospitality and entertainment industries, among others.

Trump and Pence said that the federal government is ordering “a lot more” ventilators and respirators for victims of the virus.

In response to a reporter’s question as to payments which may be made to all Americans if Congress acts, Trump said he intends to help every American because “it’s not their fault.”  He said he is observing a bipartisanship in Congress not seen earlier in his presidency.  “Nobody’s seen anything quite like this,” he said.  He predicted a prompt recovery for the U.S. economy once the coronavirus problem “is solved.”

On March 1, The Times of London reported that “Chinese laboratories identified a mystery virus as a highly infectious new pathogen by late December last year, but they were ordered to stop tests, destroy samples and suppress the news, a Chinese media outlet has revealed.”

Trump explained in response to another reporter’s question on testing that the CDC did not have the ability to “handle the volume” suddenly required by the coronavirus outbreak.  “We’ve built it into a very good system” for the future, he said.

He said that China is now paying the U.S. “billions” in tariffs and that he has no plans to cancel that arrangement.

Wilkie said that 44 out of “several hundred” veterans tested for coronavirus had a “positive” result  and that “sadly, one has passed.”