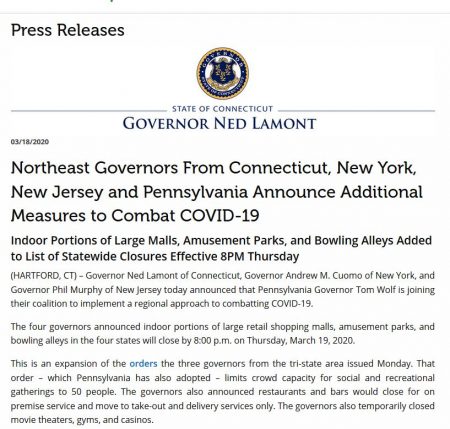 Restaurants and bars were permitted to remain open to prepare takeout and delivered food.

On Wednesday, Gov. Tom Wolf of Pennsylvania joined Lamont, Gov. Phil Murphy of New Jersey and Gov. Andrew Cuomo of New York in their “regional” approach toward combating the novel coronavirus transmitted to the U.S. from China approximately two months ago.

The total number of U.S. cases stood at 7,769 as of press time, according to Johns Hopkins University statistics, with 118 deaths.

Jury trials in Connecticut have been delayed, and many courthouses are closed or offering only limited services.  Many colleges and universities closed last week, and all public schools were closed effective Tuesday.

The Hartford Courant and other sources reported Wednesday that Connecticut residents have filed 30,000 claims for unemployment insurance over the last four business days.

As of 4:30 p.m. Wednesday, Connecticut reported 96 coronavirus cases, an increase from 68 on Tuesday and 41 on Monday. Lamont also announced the state’s first death, an 88-year-old man who suffered complications from the virus and was hospitalized at Danbury Hospital.  Approximately two dozen patients have been hospitalized, the Waterbury Republican-American reported.

Johns Hopkins had not registered the Connecticut victim as of press time and showed 16 deaths in New York State.

Connecticut’s Middlesex and Tolland Counties reported their first respective cases Wednesday as the virus spreads eastward from the region closest to the New York State line.

The hardest-hit state New York is reporting nearly 2,400 confirmed cases and 20 deaths as of Wednesday evening.

Although he had not officially joined the other three governors, on Monday Wolf ordered all “non-essential” businesses to close at midnight that day.

The four governors, along with several others, had previously collaborated on a “regional” approach to cannabis and vaping policies.

The U.S. Congress has passed two coronavirus relief packages, with a third being contemplated aimed at direct relief to all Americans and impacted businesses, according to a newsletter from Connecticut Sen. Chris Murphy on Wednesday evening.

A press conference will take place Thursday at 11:00 a.m. to reveal progress the federal Food and Drug Administration (FDA) is making in fighting the coronavirus, President Trump said.