“WE ARE NOW IN A NEW PHASE OF TESTING” 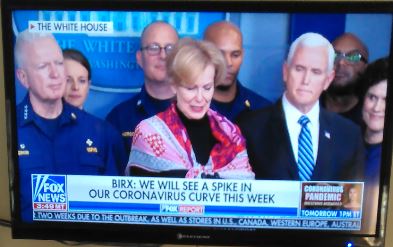 (Mar. 15, 2020) — A White House Coronavirus Task Force press conference began at approximately 5:20 p.m. EDT Sunday with the president announcing a decrease in the Federal Reserve’s interest rate from 1.00-1.25 to 0-.25, a full percentage point which Trump said he was glad to see.

At Saturday’s presser, Trump expressed his unhappiness with the Federal Reserve and its chairman, Jerome Powell, for not taking action to provide relief to Americans given the extraordinary strain on the economy from the coronavirus outbreak.  However, prior to the pandemic which Trump declared a national emergency on Friday, Trump had urged the “Fed” to lower interest rates.

Trump spoke for about five minutes, during which he thanked the CEOs of consumer food and goods suppliers such as Costco, Walmart, Kroger’s, Publix, Tyson Foods, Cargill and others for their pledges to keep stores open and well-stocked.  Walmart CEO Doug McMillan reportedly conveyed to Trump that he actually would like to see “a little bit less” consumption given that many Americans have been purchasing an inordinate amount of food and supplies, expecting the worst.

Trump “predicted” that once the coronavirus crisis is over, there will be a “pent-up demand” which will spur economic growth.  “It was very reassuring speaking to those people,” Trump said of the store CEOs.

“A lot of good things are going to happen,” he said, adding that the United States is “learning from watching other countries.” He said that Americans need to “watch over” the elderly, which is a highly-vulnerable group.

Trump then turned the podium over to Vice President Mike Pence, who he appointed leader of the Task Force approximately two weeks ago and exited the meeting to “make some calls” amid shouts from assembled reporters.

Pence reiterated that “The health experts continue to confirm to us that based on the latest information, for the American people as a whole, the risk of serious illness remains low” from the coronavirus. “But because the risk is heavily-weighted to the most vulnerable, the people with immuno-deficiencies and those who are elderly with serious underlying chronic health conditions, our administration, and I know state administrations, will continue to focus on the most vulnerable.”

He said he is grateful for state governors and “the American people” to their response to the still-emerging threat of the coronavirus.    He stressed that “grocery stories will remain open.”

There will be a briefing of all state and territorial governors on Monday, Pence said, about “our widening partnership on expanding testing to the American people.”

There is no cost for testing for any American, Pence said, due to an act passed by Congress last week.  Approximately ten states have implemented their own test centers, Pence said, and new laboratories will be “coming online ” on Monday.

Assistant HHS Secretary Adm. Brett P. Giroir, MD, announced the beginning of “a process and a program of testing” this week which will avoid the use of “hospitals and acute-care clinics.”  “We are now in a new phase of testing,” Giroir said, moving to “a testing regimen that we can test many tens of thousands to hundreds of thousands of individuals per week, and maybe even more.”

“More than 1,000 officers” from HHS will be deployed across the country in support of “the coronavirus mission,” Giroir said, modeled after the system used by FEMA.

Dr. Deborah Birx, an infectious-disease specialist, explained how the “public-private partnership” has allowed for testing in local communities as opposed to by the Centers for Disease Control (CDC).  Testing will be focused on vulnerable populations, first-responders and others showing symptoms, Giroir and Birx said.

The entire presser can be viewed here.