Trump to Speak at 3:00 p.m. Friday on Coronavirus 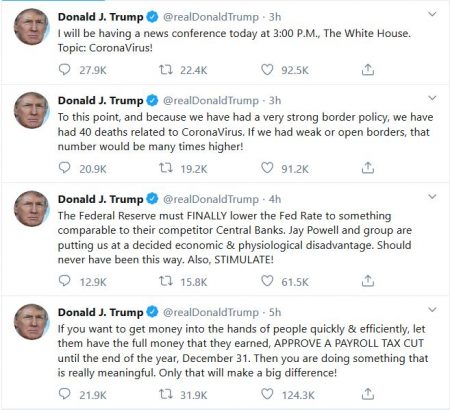 (Mar. 13, 2020) — Beginning Friday morning, President Trump issued a series of tweets about the coronavirus progression and impact on the country, concluding with his announcement that he will address the nation at 3:00 p.m. EDT.

To our knowledge, Bloomberg News was the first to report that Trump plans to announce the implementation of a “national emergency,” which will allow highly-impacted states to request a 75% reimbursement for expenses related to testing, medical care and supplies necessary to combat the virus and its spread.

Over the past week, Trump has expressed his ideas as to how to buoy the U.S. economy during the crisis. During his Wednesday-night address, he announced a halt in travel from all European Union countries, with the exception of the UK, for 30 days beginning at midnight Friday.

The Small Business Administration (SBA) will have the ability to make low-interest loans to businesses impacted by the virus, Trump said.  The president also would like to see income-tax relief through the end of the year.  “If you want to get money into the hands of people quickly & efficiently, let them have the full money that they earned, APPROVE A PAYROLL TAX CUT until the end of the year, December 31. Then you are doing something that is really meaningful. Only that will make a big difference!” Trump tweeted earlier Friday.

As was the case prior to the coronavirus pandemic, Trump was highly critical Friday of the Federal Reserve’s policies and their effects on the economy.  “Jay Powell and group are putting us at a decided economic & physiological disadvantage,” Trump said of his “Fed” chairman, who he nominated.

An hour later, Trump asserted that but for “a very strong border policy,” the 40 U.S. fatalities from the coronavirus “would be many times higher.”

Between 2:00 and 3:00 p.m., a number of governors addressed their citizens as to steps they will be taking to ease economic, educational, utility and other challenges as the impact of the coronavirus unfolds.

The virus first emerged in Wuhan, China in December, spreading quickly to a current 125+ nations around the world.  Italy, Iran and South Korea have been particularly impacted.