BUT WHAT DOES IT MEAN? 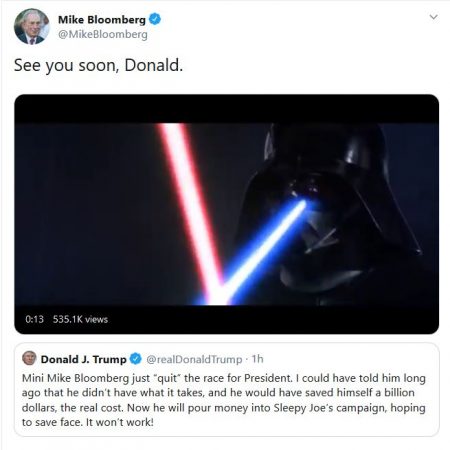 Bloomberg’s terse tweet followed Trump’s reaction to Bloomberg’s announcement that he would suspend his campaign following a poor showing in the “Super Tuesday” primaries, during which voters from 14 states cast their ballots for both Democrats and Republicans.

A self-made multi-billionaire, Bloomberg entered the race in November, financed his own campaign and spent more than $500 million, according to Forbes. Upon announcing his decision Wednesday morning, Bloomberg endorsed the now-Democrat front-runner, Joe Biden.

“Mini Mike Bloomberg just ‘quit’ the race for President,” Trump tweeted Wednesday morning following Bloomberg’s announcement.  “I could have told him long ago that he didn’t have what it takes, and he would have saved himself a billion dollars, the real cost. Now he will pour money into Sleepy Joe’s campaign, hoping to save face. It won’t work!”

On Monday, Bloomberg indicated in an interview with CNN that Biden, as a former “legislator,” is not equipped to be president.  He also said his support of Virginia Democrats “turned Virginia from red to blue, both their legislative and executive branch” (1:35), meaning from Republican-majority to Democrat-majority.

Bloomberg’s campaign website states that “In 2016, Donald Trump campaigned on big promises to deliver good paying jobs, reduce the cost of health care, and drain the Washington swamp. But rather than work across the aisle to get things done, Trump failed to deliver on his promises. Instead, he put his own interests ahead of ours, and is further dividing the country.”

To CNN’s Don Lemon, he claimed that Trump is mishandling the coronavirus response and that Vice President Mike Pence does not possess the subject-matter acumen to lead it.

Bloomberg also took responsibility for “flipping the House” of Representatives from Republican-controlled to Democrat-controlled in 2018 through millions of dollars in campaign donations, resulting in Nancy Pelosi’s becoming Speaker and Trump’s subsequent impeachment by the lower chamber.  Ultimately, the U.S. Senate acquitted Trump on both charges.

Bloomberg followed his mysterious tweet to Trump with, “Defeating Trump starts with uniting behind the candidate with the best shot to do it.  It’s clear that is my friend and a great American, @JoeBiden.” 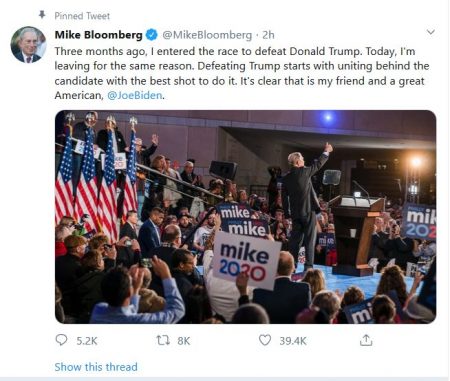 Bloomberg told Lemon that in order to remain in the race after Super Tuesday, “you have to have a decent number of delegates coming out of it.”

According to ABC News, Bloomberg won 34 delegates prior to Super Tuesday and four delegates in the unincorporated territory of American Samoa, where U.S. Rep. and Democratic presidential candidate Tulsi Gabbard was born.