WILL THIS “DEAL” BE UPHELD? 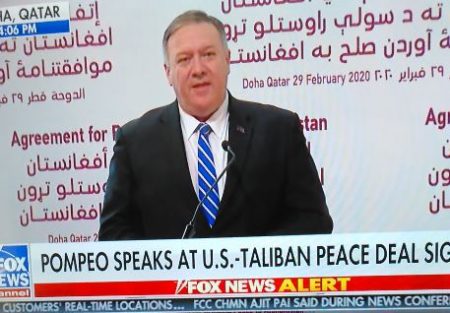 (Feb. 29, 2020) — Secretary of State Michael R. Pompeo is in Doha, Qatar on Saturday to witness the signing of a peace agreement with the Taliban for Afghanistan, where U.S. troops have been stationed for nearly 19 years following the attacks of September 11, 2001.

As of this writing, Pompeo is greeting Qatari officials just before 4:00 p.m. local time.

On Friday the U.S. State Department issued Pompeo’s schedule for the event, which includes a press availability following the signing.

According to U.S. Rep. Michael Waltz (R-FL6), a U.S. Army Green Beret who appeared on “Fox & Friends” between 7:45 and 8:00 a.m. EST, the agreement contains a 14-month timeline for the withdrawal of U.S. troops from Afghanistan.  Waltze opined that despite the aggressive timetable to withdraw troops if all of the elements of the agreement are met, some U.S. troop presence will be necessary to deter the rise of terrorism by groups such as ISIS, the Taliban and Al Qaeda.  “We all hope this works,” Waltze said, despite his expressed distrust of the Taliban.

It was the Taliban, led by Osama bin Laden, which planned the attacks on U.S. airliners, killing nearly 3,000 people on American soil on the morning of September 11, 2001.

Waltze said that the “joint declaration” requires that the Taliban conduct no fundraising or trafficking of narcotics on Afghan soil going forward.  “I hope we look back on this as truly a historic day,” Waltz said.

A statement issued Friday from President Trump reported, “Soon, at my direction, Secretary of State Mike Pompeo will witness the signing of an agreement with representatives of the Taliban, while Secretary of Defense Mark Esper will issue a joint declaration with the government of Afghanistan.”

Trump added that “Ultimately it will be up to the people of Afghanistan to work out their future. We, therefore, urge the Afghan people to seize this opportunity for peace and a new future for their country.”  In closing, Trump thanked U.S. service members for their sacrifices in connection with the U.S. presence in Afghanistan.

At 8:01 a.m. EST/4:01 local time, Pompeo delivered remarks from Doha, including that the Taliban has shown recent willingness to sever its relationship with Al Qaeda.  “This agreement will be nothing,” Pompeo said, if all parties do not uphold the agreement.  “First, keep your promises to cut ties with Al Qaeda and all other terrorists,” Pompeo said as a first requirement of the Taliban.

“All Afghans deserve to live and prosper without fear,” he said.  He urged Afghanistan’s political leaders to respect all views and to “embrace the historic progress made for women and girls,” among other improvements he recognized in daily life since 2001.

The “deal” materialized as as result of a successful seven-day cease-fire, to which Pompeo referred in his remarks.

His comments ended approximately four minutes later and were greeted with applause.

At 8:13 a.m. EST/4:13 local time, the signing ceremony took place and was broadcast live by Fox News.  At 8:16, U.S. Special Representative to Afghanistan Zalmay Khalilzad and a representative from the Taliban shook hands.

President Trump is well-known for his engaging in “deals” and his bestselling book, “The Art of the Deal.”  The mainstream press has been critical of his “deals” in regard to trade agreements and nuclear development in North Korea, among others.

Pompeo in Qatar to Witness Signing of Peace Agreement for Afghanistan added on Saturday, February 29, 2020