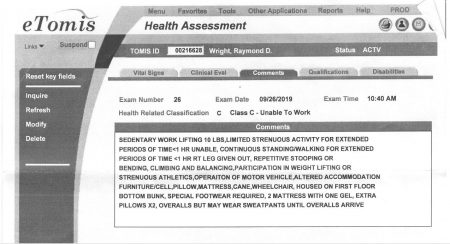 (Feb. 17, 2020) — The Post & Email recently heard from Tennessee inmate Raymond Wright, #216628, a disabled inmate who has corresponded with us previously as to the lack of handicapped-accessible recreational activities and cell accommodations at the Northwest Correctional Complex (NWCX) in Tiptonville.

In some instances, Wright told us in 2017, when taken outside the prison, wheelchair-bound inmates “are flipped out of their chairs and some are getting injured” from cracked sidewalk pavement.  He has also related his personal challenges inside the facility resulting from the absence of safety rails in his cell as well as the height of clothing hooks and positioning of the furniture.

Wright has been requesting that changes be made to his cell for more than two years without success, despite a September 26, 2019 “Health Assessment” documenting a physician’s recommendations.  The report classified Wright as “unable to work” with a need for “altered accommodation furniture/cell” and specialty overalls and states that he is to occupy a “bottom bunk” and to have “special footwear.”

On November 19, 2019, Wright filed an “Inmate Inquiry” to ask the status of the recommended cell alterations and overalls. On page 1, he wrote, “I would like to know what is up with the overalls ordered in June by the doctor/and the altered accommodations of the furniture and the rails, so I can get out of my wheelchair when my legs fail me.  It was ordered by the doctor 9-26-19.  The cells do not meet the standards for a wheelchair cell set forth in the ADA and the D.A. Thank you.”

“ADA” refers to the Americans with Disabilities Act passed by Congress in 1990.

On page 2 of the inquiry, Wright wrote:

This has all been ordered by Medical because they are having troble getting me to Special Needs for the tests the surgeon wants They have done their priority consults but someone either here or Nashville is refusing to act on the consults. [sic]

So I am asking that my cell be arranged as required by law or that I be shipped to either Special Needs or Morgan County where they have facilities available until I can get my lower back fixed.

Thank you for your time in this matter.

On January 22, 2020, Wright filed a grievance with the prison under Title II of the ADA.  The three-page typewritten filing accuses prison management of violating the 8th and 14th Amendments, Article I of the Tennessee Constitution, and 28 CFR, Part 35 of the ADA dealing with “accessibility standards” in “state and local government services.”

In the “Description of Problem,” Wright wrote that while Warden Shawn Phillips reportedly approved the cell accommodations, another “administrator said they wer not going to alter my cell.” [sic]

Referencing the Inmate Inquiry of November 19, Wright confirmed he “received no answer” to his queries as of January 20.

“I am forced to tie a sheet around the upper bunk to pull myself out of a wheelchair due to my degenerative bone disease and bulging discs in the lumbar spine of my back,” Wright stated on page 2.  On page 3, he said he believes prison management is exhibiting “deliberate indifference” to his pain and “failing to take reasonable measures” to prevent potential “serious harm” to his person which could result from the physical challenges he faces daily.

At the bottom of page 3, Wright stated his “requested solution” to the grievance as  the installation of “side and rear grab bars around the toilet; toilet seat be raised 17 to 19 inches above the floor to permit transfers to and from wheelchair;” and “A grab bar be placed on the bunk,” among others. 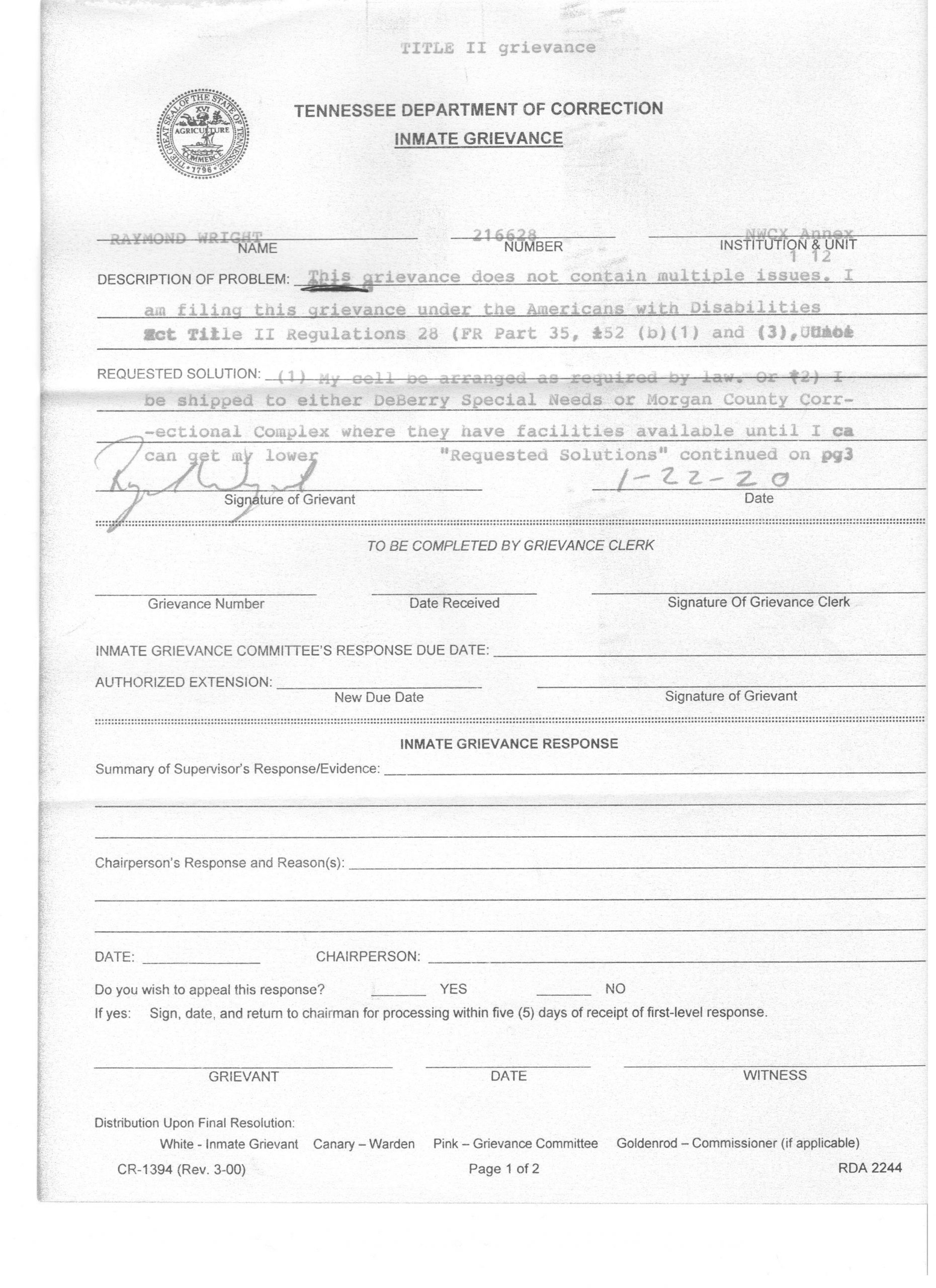 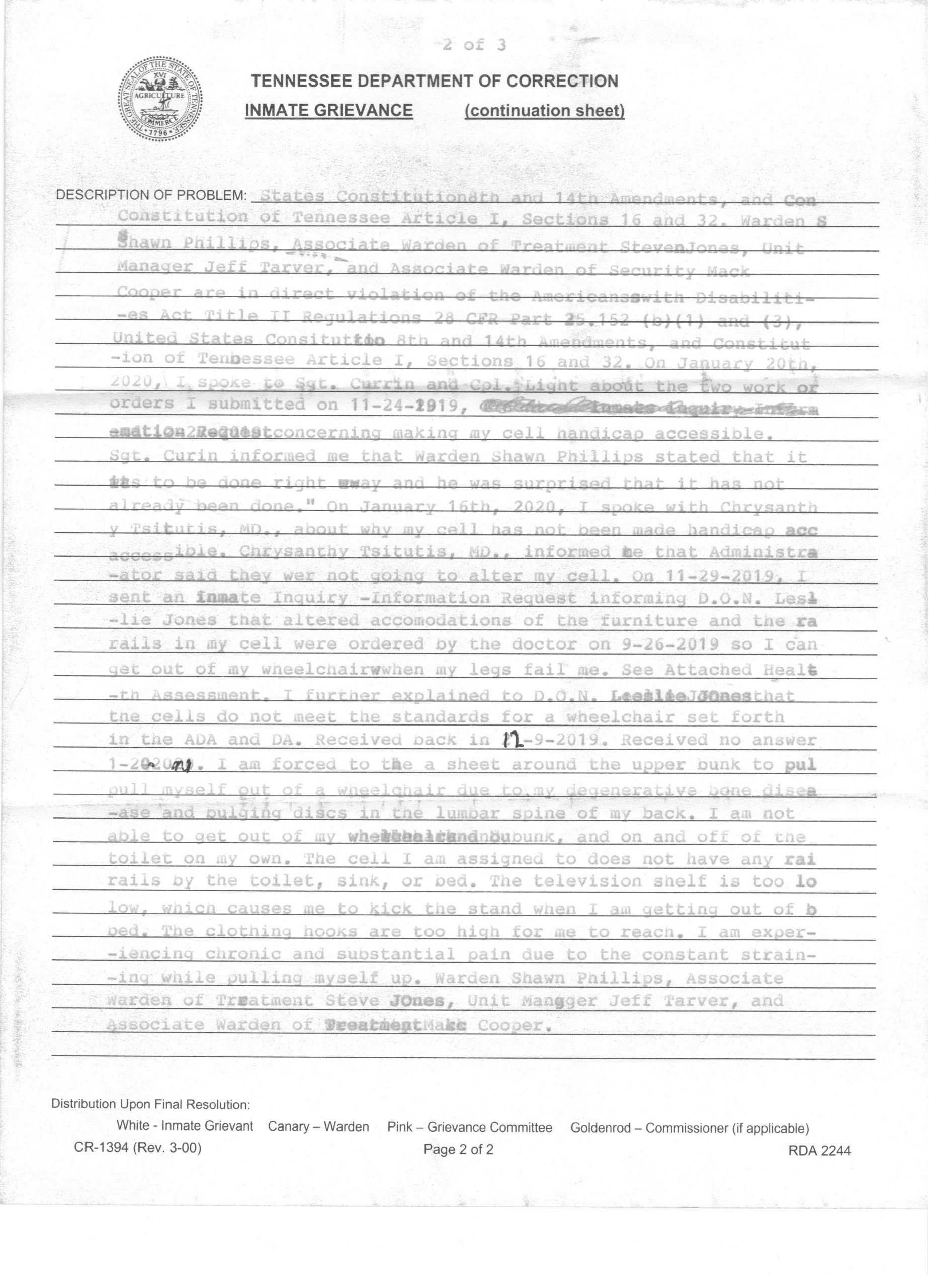 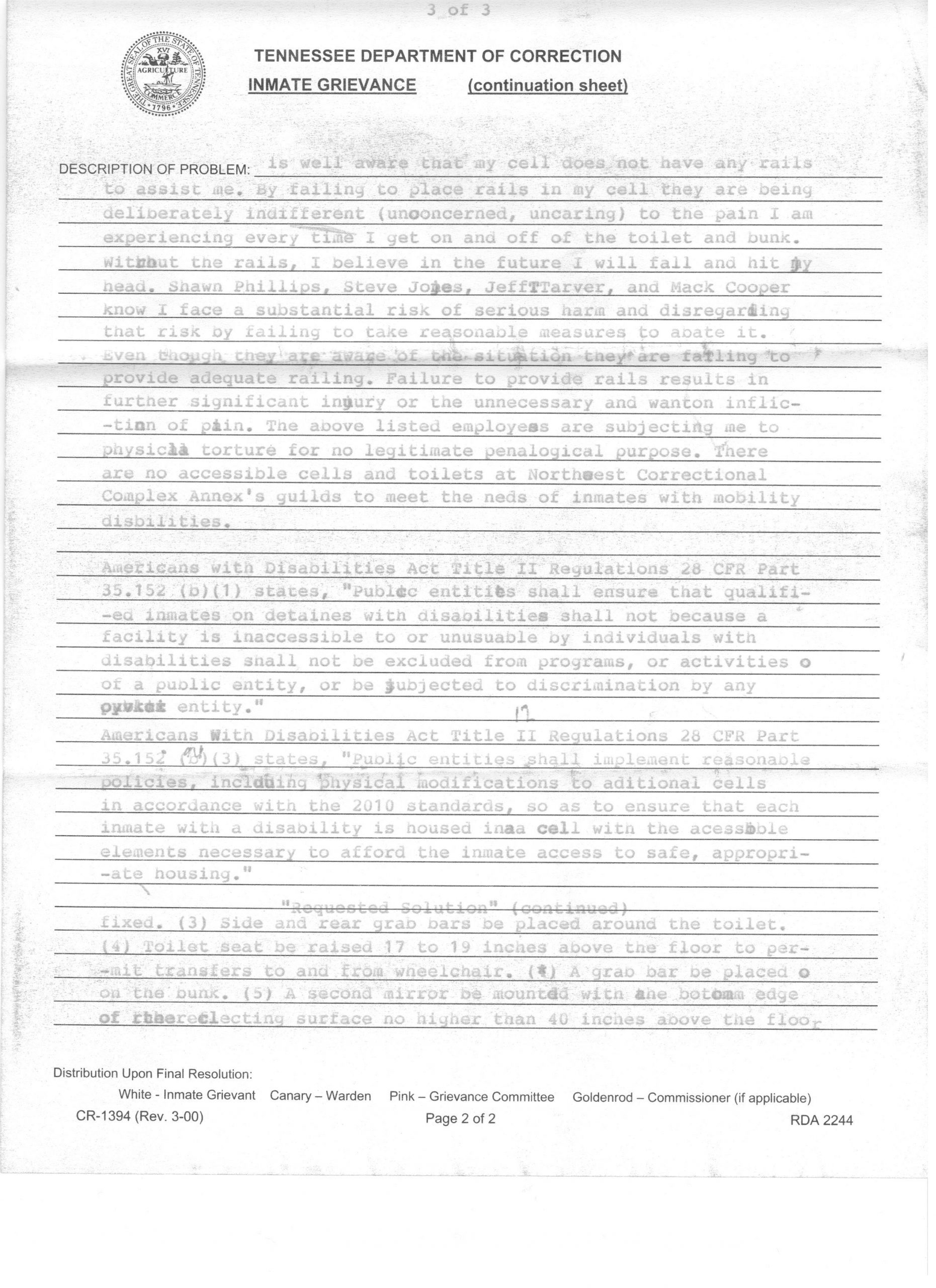 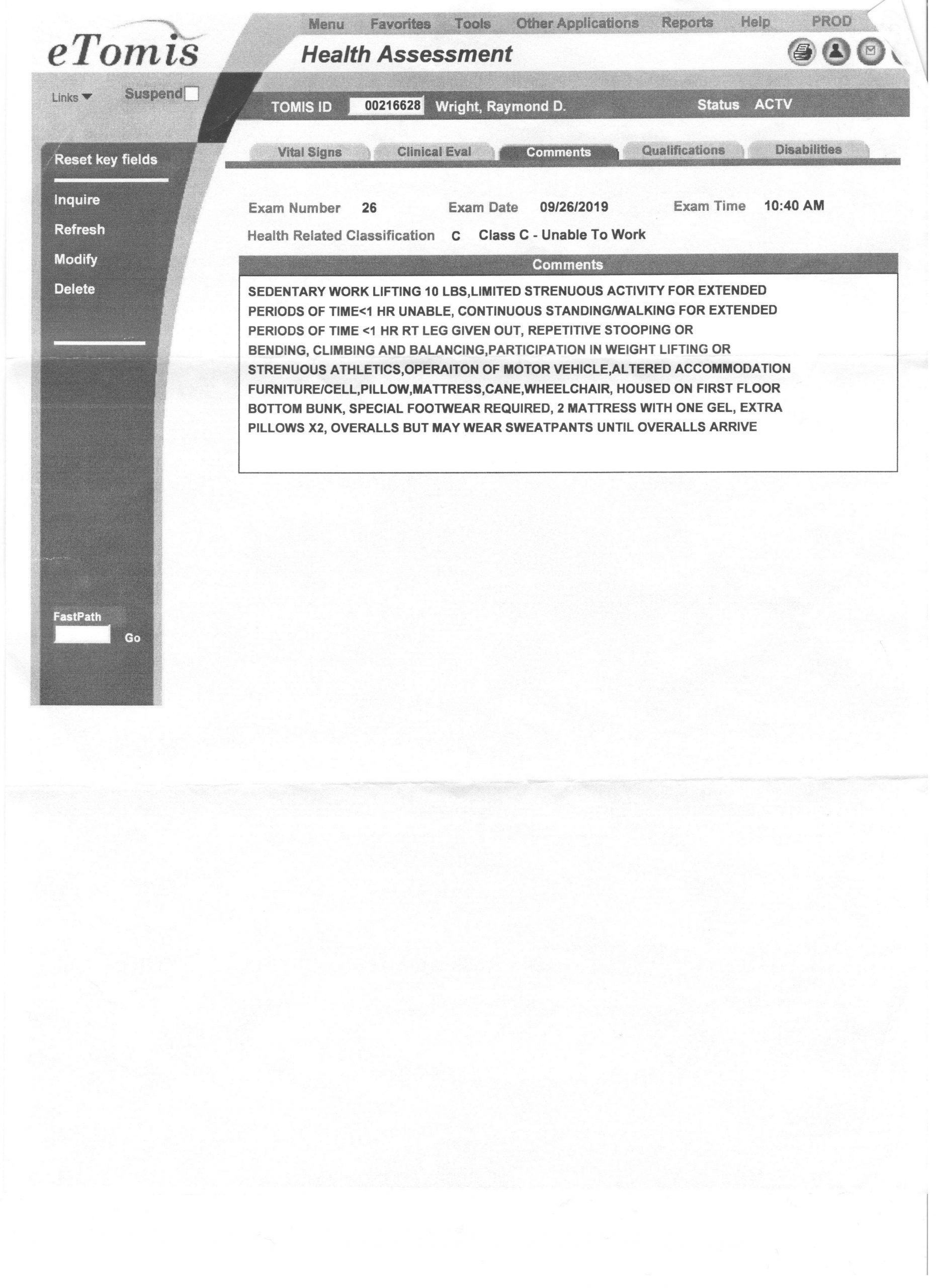 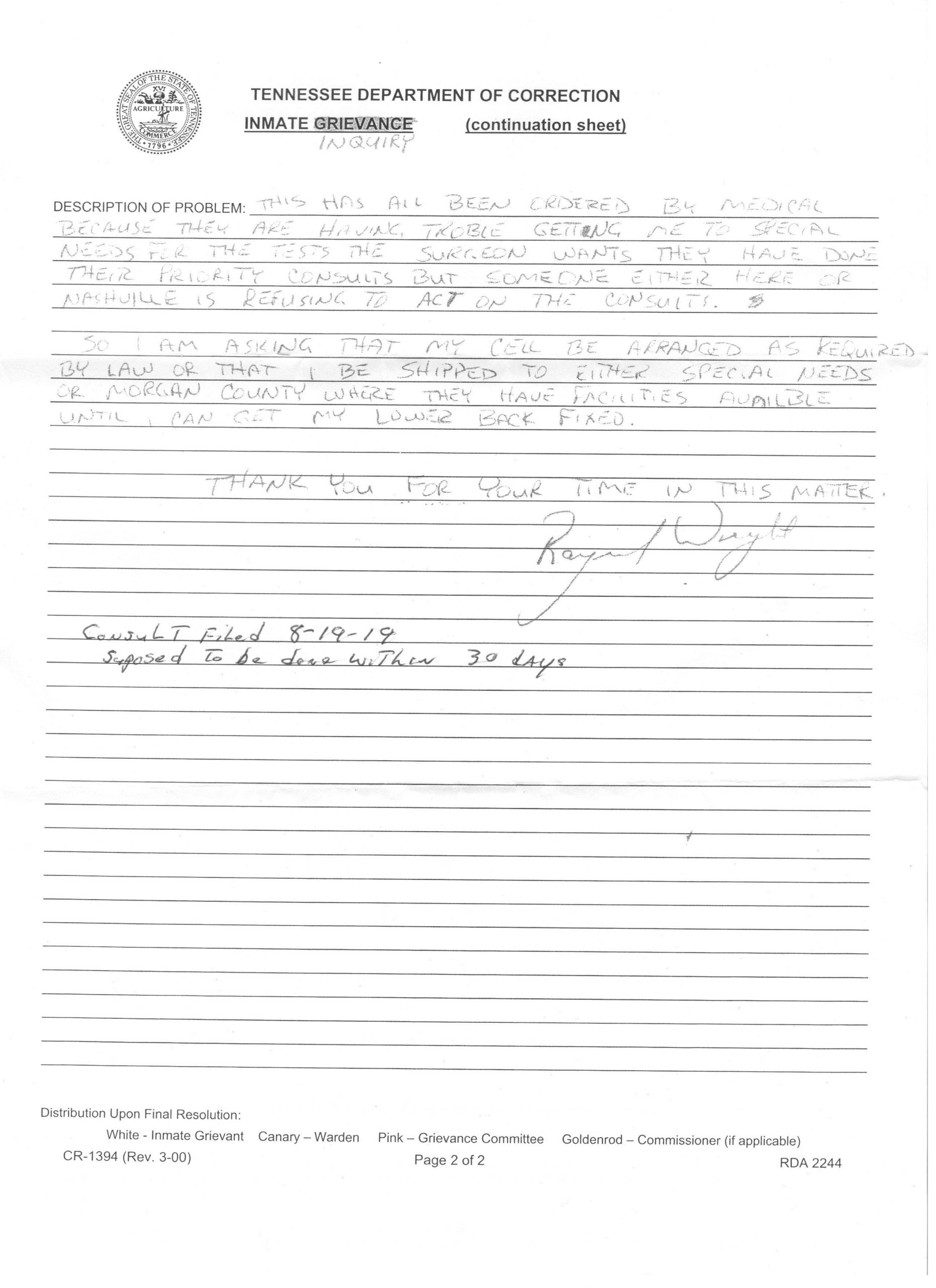 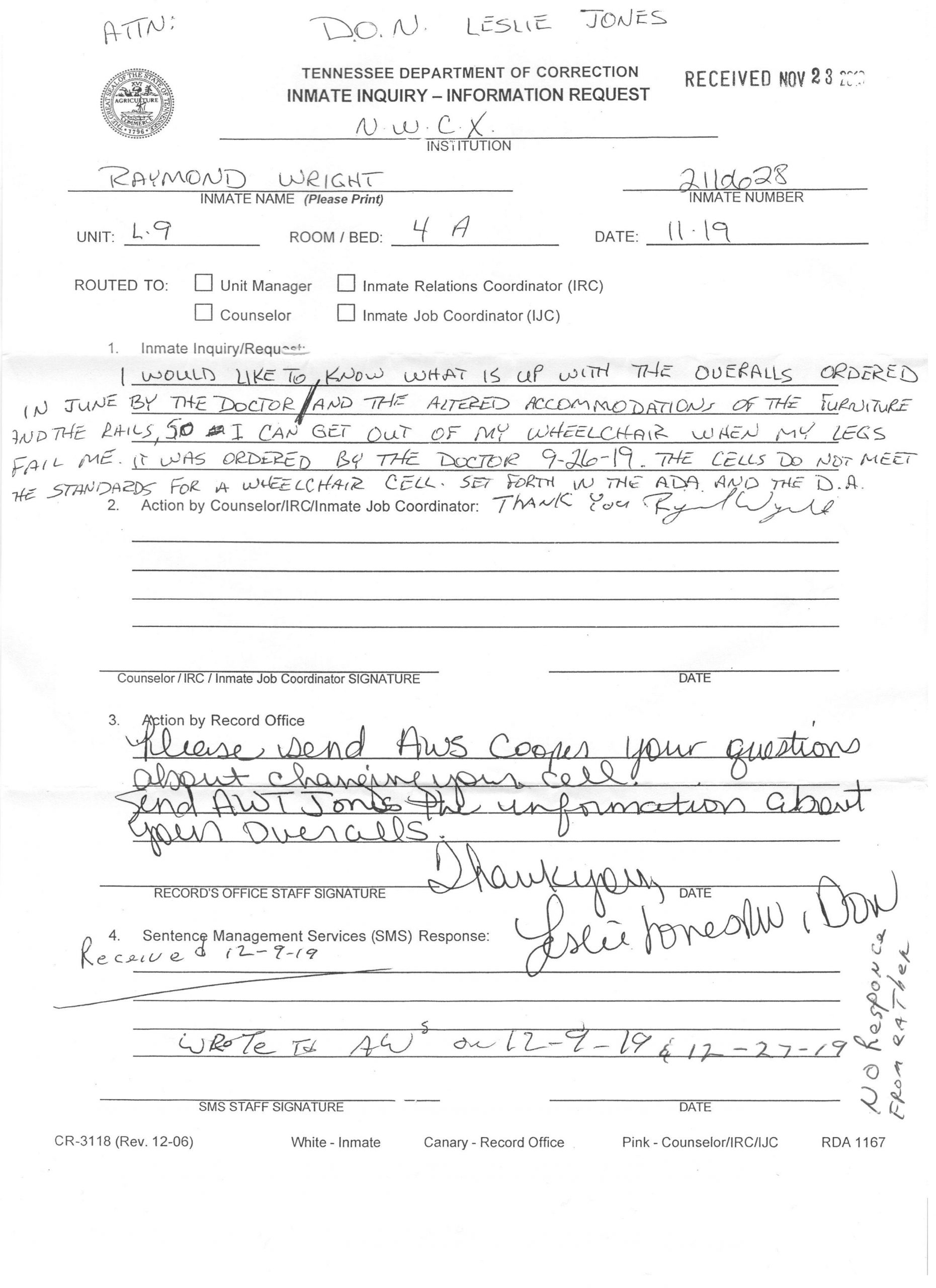