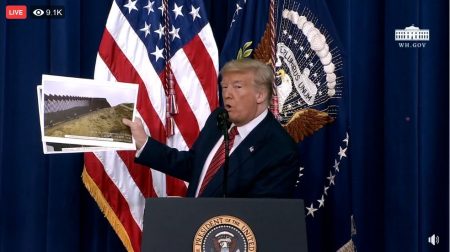 (Feb. 14, 2020) — Shortly after 2:00 p.m. EST, President Trump addressED members of the National Border Patrol Council (NBPC) at the White House as to the progress his administration has made in controlling the entry of illegal aliens and erecting fencing along the U.S.-Mexico border.

Border agents and their families were invited, NBPC president Brandon Judd said during his introduction of the president.  Judd praised Trump for having routinely “asked about the families” of agents prior to discussing business at any given time.

Trump then made his entrance to a standing ovation, with some in attendance shouting, “Four more years!”

Trump began by divulging that Judd supported his candidacy “even before I was gonna run.”  “So you were there before the beginning,” he directed to Judd.

The NBPC consists of approximately 18,000 agents.

While speaking about the recent coronavirus outbreak, mainly in China, Trump praised Acting Homeland Security Secretary Chad Wolf for his assuming of the role following the departure of Kevin McAleenan last year.  The U.S. is coordinating its response with developments in that country, Trump said.

He moved on to provide a detailed analysis of an “anti-climb panel” currently being erected on in El Paso on the Texas-Mexico border.  “We think by the end of the year we’ll be up to over 400 miles, and shortly thereafter we’ll be at 500 miles, and then we’ll determine if there’s any other area that might need it…” Trump said, while holding up photos of the nighttime construction.

A former builder of commercial edifices, Trump described the materials included in the anti-climb panel.  He said that black paint “makes it extraordinarily hot, especially in areas along the Mexican border; it’s not known for cold weather…you don’t have too much snow in this area, wouldn’t you say, Chad…?” he quipped.

The particular fencing, Trump said has been erected over 122 miles and “will be an additional, tremendous safety valve…This really stops ’em.”

He said that Border Patrol agents are sometimes “abused, and they’re incredible what they do.”  He also lauded Immigration & Customs Enforcement (ICE) agents, who he said have “taken out thousands and thousands of MS-13,” referring to the brutal Mexican gang which has infiltrated parts of Long Island, Virginia and California.

If someone attempts to cut through the border wall with a sharp object, Trump said, a detection system identifies the perpetrator.  “It’s equipped with a lot of different contraptions, including cameras,” he said.  “Where we have it built, it has been like day and night.”

At 14:14, directing himself to Judd, Trump said, “I want to thank you; it’s so incredible having you as my friend.”

Trump expressed appreciation to Mexico for its 27,000 soldiers “now guarding our border.”

“As long as I’m President of the United States, you will always have a loyal champion in the Oval Office, because I am with you like no president has ever been with you; you know that,” Trump said to enthusiastic applause.

He then recognized NBPC officers and spouses as well as surviving spouses of Border Patrol agents who made the ultimate sacrifice.

Illegal-alien border crossings have declined over the last eight months, Trump said.  He decried the old “catch-and-release” and “lottery” systems which he said Democrats favor.