(Jan. 30, 2020) — At approximately 1:14 p.m. EST, U.S. Supreme Court Chief Justice John Roberts, who is officiating over the Senate impeachment trial of President Trump, declined to read a question submitted by Sen. Rand Paul on the second day of questioning by U.S. Senators of both the House Impeachment Managers and Trump’s defense team.

“The presiding officer declines to read the question as submitted,” Roberts declared.

On Wednesday, reports said that Paul had attempted to ask a question about the whistleblower whose August 12, 2019 complaint touched off the House’s impeachment inquiry, resulting in two Articles of Impeachment in December, and that Roberts had refused to recognize Paul.

There was no response from the Senate gallery after Roberts made his declaration on Thursday, although a journalist for Roll Call reported Wednesday that Paul was vocal about the issue.

The whistleblower reportedly interacted with staffers for Lead House Impeachment Manager Adam Schiff (D-CA28) prior to the filing of his or her complaint with the Intelligence Community Inspector General (ICIG), who deemed it to be a matter of “urgent concern.”  The complaint reported second-hand allegations that Trump had “abused his power” during a July 25, 2019 phone call with Ukrainian President Volodymyr Zelenskiy.

Schiff had originally said he would immediately have the whistleblower testify but reversed himself not long afterward, stating that his or her testimony wasn’t necessary.

On Wednesday evening, Rep. Elise Stefanik, a member of the House’s presidential defense team, tweeted that Schiff’s staff “helped write” the whistleblower’s complaint, a claim Schiff denied during the Senate hearing on Wednesday.

Prior to the start of Thursday’s hearing at 1:00 p.m., Paul tweeted, “My question today is about whether or not individuals who were holdovers from the Obama National Security Council and Democrat partisans conspired with Schiff staffers to plot impeaching the President before there were formal House impeachment proceedings.“

Paul issued several tweets after Roberts refused to read the question, the first of which said, “Are you aware that House intelligence committee staffer Shawn Misko had a close relationship with Eric Ciaramella while at the National Security Council together 1/2” followed by “and are you aware and how do you respond to reports that Ciaramella and Misko may have worked together to plot impeaching the President before there were formal house impeachment proceedings. 2/2.” 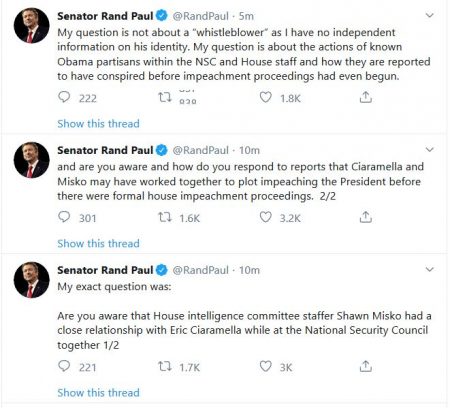