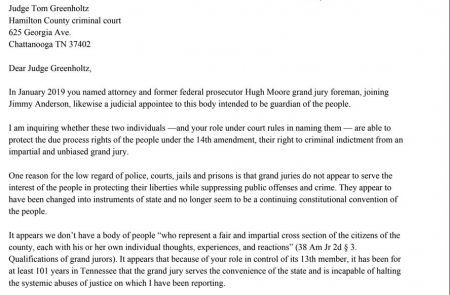 Tulis lays out his grievance in a 10-page analysis [attached] chock full of court cases and statutory provisions. Judges’ naming of the grand jury foreman apart from the random selection process by which others arrive in that body is unconstitutional and puts criminal defendants’ rights, Tulis says.

Tulis is the owner of NoogaRadio 92.7 FM, the Jeff Styles, Sean Hannity and CBS Radio news affiliate. His weekday 1 p.m. show covers local economy and free markets and is a platform by which he calls for reform of law enforcement and the judiciary. His website, TNtrafficticket.us, focuses on abusive policing on roads and highways, which he says is often outside the scope of state law. He worked 24 years as a copy editor at the Chattanooga Times Free Press.

“In my estimation, every indictment in the state of Tennessee for the past 101 years is liable for a proper challenge on due process grounds. The bias and discrimination in the selection of the foreman may not be racist as it was in the 1960s and ’70s. But it makes every grand jury at least 1/13th unconstitutional since one member — the foreman — is a personal, professional and/or social favorite of the judges, and is put there by the judges. Often this person has a career bias in favor of cops, DAs and the state prosecution machinery.”

Tulis says the constitution and the law envision the grand jury as defending the rights and liberties of the people and hounding crooked city councils, sheriffs, police officers and state officials.

In the letter, Tulis asks the judges if members of the public should have confidence in the judicial system.