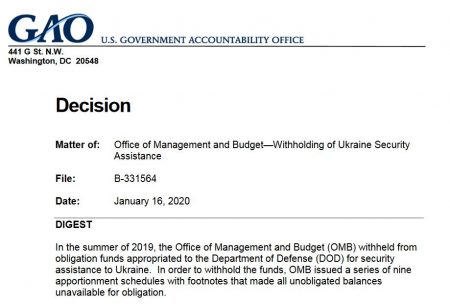 (Jan. 19, 2020) — As the impeachment carnival against President Trump begins in the Senate, two of the most recent “new” revelations purporting to justify calling additional witnesses and going beyond the matters set out in the two articles delivered last week to the Senate have surfaced.

Faithful P&E reader alert: while the jury is still out on the substantive accuracy of the report – concluding that the Office of Management and Budget (“OMB”), and therefore the executive responsible for it, President Trump, “violated the law” by “deferring” the “obligation” of certain appropriated funds for security and military assistance to Ukraine and was not justified as being a “programmatic” delay – the report itself displays several suspicious fingerprints of Deep State animus against and opposition to President Trump.  Indeed, the President has already suggested as much.  Whether that is true or not is a matter of opinion and, potentially, better left to the courts… more on that later.

First, the document has the same sort of detailed construction which characterized the “whistleblower” complaint addressing President Trump’s “July call” with Ukrainian President Zelensky, i.e., drafted by a lawyer or lawyers over an extended period of time prior to its “release” for public consumption.  The timing of the release of this GAO 1/16/20 document seems plainly calculated to have occurred after the articles of impeachment were delivered to the Senate, thus supporting a specious claim of “new evidence.”

And given the detail, it is hard to conclude that the document had not been “under construction” for a long time, simply awaiting the “right time” to drop it.  Thus, the timing of its release would seem to indicate, at least potentially, some form or coordination or “collusion” between the Democrats in the House and, potentially Senator Van Hollen, and at minimum, the General Counsel of the GAO.

Second, in a GAO press release issued at the same time the report was made public, January 16, 2020, Thomas H. Armstrong, the GAO General Counsel who signed the report, asserted in part: “Today, [the] GAO issued a legal decision concluding that the Office of Management and Budget violated the law when it withheld approximately $214 million appropriated to DOD for security assistance to Ukraine.”  Words are important.  Accordingly, let us examine more closely the GAO’s characterization of the document as a “Decision” rather than as a “Report.”

In point of fact, the document at issue is not a “decision” in the sense that it has binding, legal force.  Instead, it is merely a “report” expressing the legal opinion of Mr. Armstrong and the GAO.  Neither Mr. Armstrong nor the GAO is a judicial officer or a court of law empowered to issue “decisions” on matters of legal significance.  The use of the word “decision” suggests that the “report” carries the status or imprimatur of a court or administrative law judge’s ruling on a matter.  Not true.  While the GAO can issue “decisions” on, for example, federal contract bid protests, such is not the case here with B-331564.

That statute provides, in relevant part, that if a president (or the OMB, under the control of the president) effectuates a “deferral” of appropriated funds, then the Comptroller General “… shall make a report on such … deferral and any available information concerning it to both Houses of Congress.” (Emphasis added).  Stated otherwise, the statute upon which the GAO bases its authority for issuing the document restricts the same to “reports,” thereby excluding from its statutory authorization either “decisions” or characterizations of “reports” as “decisions.”

The GAO document also notes (pp. 6-7) that “[e]nacted statutes, and not the President’s policy priorities, necessarily provide the animating framework for all actions agencies take to carry out government programs.  Louisiana Public Service Commission v. FCC, 476 U.S. 355, 374 (1986) (‘[A]n agency literally has no power to act . . . unless and until Congress confers power upon it.’); Michigan v. EPA, 268 F.3d 1075, 1081 (D.C. Cir. 2001) (a federal agency is ‘a creature of statute’ and ‘has no constitutional or common law existence or authority, but only those authorities conferred upon it by Congress’) (Emphasis added).

Since the GAO is, plainly, a “federal agency,”  when the GAO and/or Mr. Armstrong mischaracterize that which 2 U.S.C. § 686 defines as a “report” as being, instead, a “decision” having different import under a different statute (i.e., 31 U.S.C. § 3529, entitled “Requests for Decisions of the Comptroller General”), the argument can be made that the GAO has violated the same laws, legal principles and judicial decisions which it claims the OMB did with regard to the Ukraine “deferrals.”  Bad form.

Because a request for a “decision” under 31 U.S.C. § 3529 is confined to “[a] disbursing or certifying official or the head of an agency…” – thereby excluding U.S. Senators, including Senator Van Hollen – the only remaining correct label to be applied to GAO File B-331564 is: “a report under 2 U.S.C. § 686 expressing the non-binding opinion of the GAO.”  And, by the way, supersizing the font and boldfacing the word “Decision” at the beginning of the 1/16/20 document at issue – improperly suggesting to the casual reader that it is something that it is not – merely underscores the mischaracterization taking place.

Moreover, the operative language of the prior two reports and the present one posits essentially the same thing: absent specific statutory authority, a president cannot base the deferral of appropriated monies on his own policy determinations.  Indeed, the language from B-237297.3, at 4 (i.e., “[t]he executive branch may not defer for ‘policy’ reasons.”) is virtually identical to the language in the present report, B-331564 at 6 (i.e., “[t]he ICA does not permit deferrals for policy reasons.”).  Thus, while the present report is not a “new” interpretation by the GAO, it is certainly not a “decision” of a court of law.

Indeed, on seven (7) prior occasions, the GAO found that “President” Barack Hussein Obama, Jr. and agencies under his administration had violated the ICA, with an identical result: no effort was made to suggest – much less implement – impeachment measures for having committed “high crimes or misdemeanors.”  Faithful readers know full-well that Obama, being likely ineligible to serve as president in the first place, was subject to impeachment for that reason alone.

It is also interesting that the present GAO report would cite two prior of its older reports (as to Presidents Reagan and Bush) instead of including any of the seven more recent reports where “President” Obama was also found, through his agencies, to have violated the law, or to any other GAO reports issued under the administrations of Presidents Kennedy, Johnson, Carter or Clinton – all Democrats – where the “no-deferrals-for-policy-reasons” rubric was deployed.

Ominously, the report states that the GAO considers “reluctance [by the OMB and the State Department] to provide a fulsome response [to the GAO request for more information] to have constitutional significance…” with respect to purportedly guarding “Congress’ constitutional power of the purse.” B-331564 at 9.

In this regard, 2 U.S.C. § 687, the statute immediately following the one GAO cites as its authority for the 1/16/20 document, is entitled “Suits by Comptroller General.”  That statute provides that the Comptroller General can initiate a lawsuit in the D.C. U.S. District Court “through attorneys of his own selection” upon the expiration of “25 calendar days of continuous session of the Congress following the date on which an explanatory statement by the Comptroller General of the circumstances giving rise to the action contemplated has been filed with the Speaker of the House of Representatives and the President of the Senate.”

However, since the monies at issue have long ago been “released” and the deferral “undone,” such a lawsuit would likely be dismissed on the grounds of mootness.  But since under the statute the Comptroller General may hire “attorneys of his own selection” and the potential for making the President’s life even more difficult with such a suit could play into the Democrats’ narrative that additional witnesses and evidentiary proceedings are needed in order to successfully convict the president in the Senate, why not give it a shot?  Hey, discovery mechanisms available in U.S. District Court could also yield evidence of additional executive defalcations.

The current Comptroller General is one Gene L. Dodaro, appointed to the post by Mr. Obama in 2010.  To be clear, congressional support for his nomination and appointment was bipartisan (unlike the situation regarding the current impeachment proceedings) and there is no indication that he serves as Comptroller General in any other than a competent way.  Still, it will be interesting to see what, if anything, emanates from his office – or the offices of “attorneys of his own selection” – on February 11, 2020, the 26th day after the release date of B-331564.

In summary, as the impeachment proceedings unfold in the Senate – hopefully brief and leading to an acquittal of President Trump – people should keep in mind that the GAO document discussed above represents only the opinion of a federal agency which has mischaracterized it.  Whether that mischaracterization is intentional or not remains to be seen.

Still, if that which is “good for the goose is also good for the gander,” the GAO has exceeded its statutory authority by calling B-331564 a “decision” when it is merely a “report.”  And yes, Virginia, stay tuned for what may take place next month.

Of Decisions and Reports added on Sunday, January 19, 2020