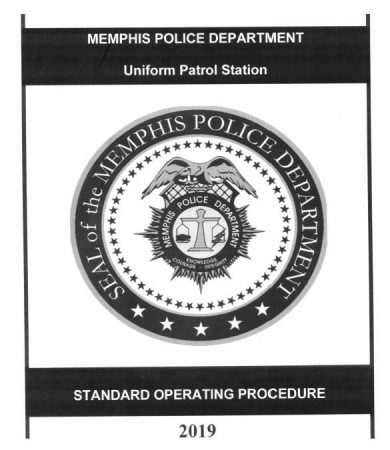 (Jan. 19, 2020) — Recently we got documents from Memphis Police Department using “Authorization of Agency” as a search key, and we obtained an excerpt of MPD’s “Uniform Patrol Station Standard Operating Procedure”.    The extract was very helpful as it outlined the procedures for Authorization of Agency, which we wrote up in our blog.

We’ve been browsing MPD’s P&P, their Policy and Procedure manual.  We put it online a couple of years ago, but the UPSSOP was a new one on us.   So we FOIA’d it and it is available here as a PDF.

A word about MPD’s FOIA policies.

The City has always been slow with their FOIA responses.  They are required by law to produce documents in seven working days, but often take a year or more.    Back in the day, say 2017 or 2018, they’d put the electronic version of the FOIA results on their server and send you a secure link.   No muss, no fuss.   Now, they send the electronic version to MPD’s Central Records Office on the seventh floor of the Downtown cop shop, print them on their printer and charge 15 cents per page.  It costs the public more, and a hard to park visit downtown, and it costs the City more.   This is an attempt to hide the public’s data from the public.

What really piqued our interest in the UPSSOP was they waited seven weeks, told me the UPSSOP was ready to be picked up for ten bucks, and gave me a CD with a copy of the P&P manual.   A sternly worded follow-up FOIA got the UPSSOP gratis in two days, so they knew what I wanted.

In the introduction on page 3 of the UPSSOP, the reason given for the creation of the UPSSOP was to “meet CALEA standards”.   The Commission on Accreditation for Law Enforcement Agencies is a rather ineffective organization which purports to ensure that local police organizations meet certain standards.    CALEA comes to Memphis annually to “audit” MPD’s standards compliance.   In 2018 the CALEA public input session was arbitrarily canceled without notice, and members of the public who turned up to the meeting were turned away.   The 2019 session was attended by two members of the public.    CALEA is more of a whitewashing organization and we will audit one of CALEA’s own audits later in this piece.

Chapter XIII covers the procedures for Body Worn Cameras and In Car Video, with obvious reference to the police shooting of Martavious Banks.

Chapter XIV sets out procedures for the investigation of fatal officer shootings.

Chapter VI section D (omitted from the list of contents) describes the organization of the Task Force, i.e. the Multi-Agency Gang Unit (MGU) and Organized Crime Unit (OCU).  Section 52 of the Paperwork Routing chapter describes Authorization of Agency, a much-abused process at MPD.

Those of us who like to obtain MPD information via FOIA know that, to get the information you want, you must specify the datum exactly, and this document is like a roadmap of MPD’s systems and their contents. Various systems and data repositories are named, e.g. the Command Drive, Oracle and others. Specific reports are named, e.g. Chapter VII section 9 is the Response to Resistance form. Section 26 is the Hearing Summary for disciplinary hearings. And there are references to juvenile arrests and interrogation throughout the document, especially in the General Investigative Bureau section on page 55.