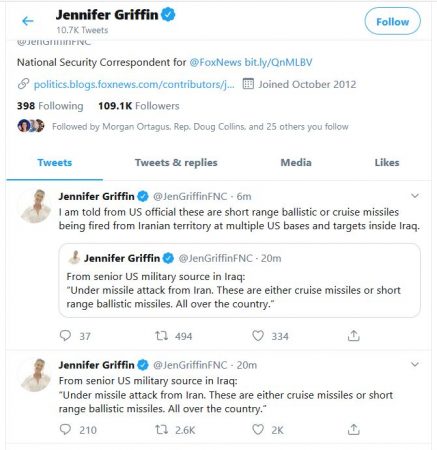 (Jan. 7, 2020) — Just before 6:30 p.m. EST, Jennifer Griffin of Fox News tweeted that a “senior US military source in Iraq” informed her that U.S. interests there are “Under missile attack from Iran. These are either cruise missiles or short range ballistic missiles. All over the country.”

Approximately 14 minutes later, Griffin added in another tweet, “I am told from US official these are short range ballistic or cruise missiles being fired from Iranian territory at multiple US bases and targets inside Iraq.“

Democrats immediately criticized the Trump administration’s move, claiming that it would lead to a new Middle-Eastern war.

At 6:43, Griffin appeared on-camera with Fox News’s Bret Baier to say that the IRGC (Iranian Revolutionary Guard Corps) took responsibility for the lobbing of the missiles.

On Sunday, the Iraqi Parliament reportedly voted to demand the exit of all “foreign forces,” but on Monday Defense Department Secretary Mark Esper said that there were no plans for U.S. troops to leave.

Griffin added that various U.S. troop movements have occurred over the last several days in a plan to protect U.S. bases from any anticipated retaliation.