“I’M STILL A HUMAN BEING” 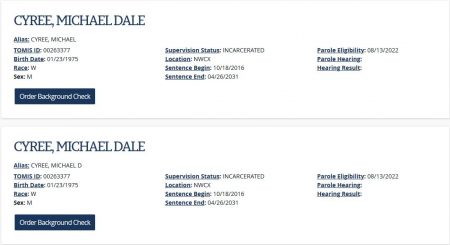 (Dec. 25, 2019) — A letter received Tuesday from an inmate at the Northwest Correctional Complex (NWCX) in Tiptonville, TN reports that following an appearance at the courthouse in Lynchburg, Moore County, last month, he fell down a 19-step staircase while in custody and received virtually no subsequent treatment from prison medical staff.

According to his five-page letter, Michael Cyree, #263377, “TDOC Policy and Procedure for inmates in transport are to be handcuffed with a black box and Bellychained also with shackels on legs in addition escorted by two TDOC officer’s one in front one in back.” [sic]

Following his appearance in Moore County, he wrote, he was taken by a correction officer to a stairway because of the lack of an elevator in the building.  Walking in front of the correction officer, Cyree said, on the first step he tripped over one of his chains and tumbled downward, landing upside-down on the bottom steps, where he was reportedly tackled by another guard who presumably believed he might escape.

Continuing on page 2, Cyree described hitting his back, neck, shoulders and the top of his head during the fall.  “Then I just rolled helplessly to the bottom,” he wrote.

“As I finally stopped one of the Moore County Sheriff deputys dove on top of me, There was two Deputy’s ones name is Ron Carpenter and the one who dove on me don’t know his name but he has a metal hook for a left hand he is the K-9 officer in Moore Co.,” Cyree continued.

As he was taken to a hospital in Tullahoma, Cyree said, “the real Pain starts to set in.”  Upon arriving at the hospital, he said, “everything was Neg thank GOD.  I was at that hospital for 3 hrs finally 30 min before I was discharged the TDOC officer had to go tell the nurse to give me something for Pain…”

“…the officer did get them to give me two Pain shots before I left” for Bledsoe Correctional Complex (BCCX), Cyree said, the facility in closest proximity to the Moore County courthouse.  “All weekend at Bledsoe all they give me was two Ibproffen’s 800.  I felt like someone beat me with a baseball bat,” he recounted on page 3 [sic].

The following Monday, Cyree said, he was returned by bus to NWCX “handcuffed blackbox, bellychained and shackels right back on me (They didn’t even clean my wounds on my chins).  It takes 9 hrs on the bus ride to get back to Northwest.  That was one of the longest and Painfullest ride’s I ever took I hurt from my head to my feet…”

Upon arriving at NWCX, Cyree wrote, he was placed “upstairs on a top bunk in the POD.”  On November 25, he said he requested to see a physician while without pain medication.  The prison nurse reportedly saw him on Thanksgiving Day, which was November 28, and provided him with enough Ibuprofen to last “four days.”

He went without pain relief, he said, for a time, then a nurse provided three days’-worth of ibuprofen as he awaited an appointment with a prison physician.  After an incident with his cellmate, he wrote, he was placed in protective custody (PC).  “So here it is Dec 20th I still have not saw a doctor about my Back, neck, knee, shoulder.  I have two grievances and put in a totall of five sick calls.  I understand Im an inmate in Prison but Im still a human being, I dont deserve to be treated like this…” he wrote on page 4 [sic].

[Editor’s Note:  As Cyree correctly noted, The Post & Email does not, nor is it qualified to offer, legal advice or recommendations to any inmate or individual who asks that we review his or her narrative.]

Cyree is hoping to locate legal representation over his ordeal.  His letter reads, in its entirety: 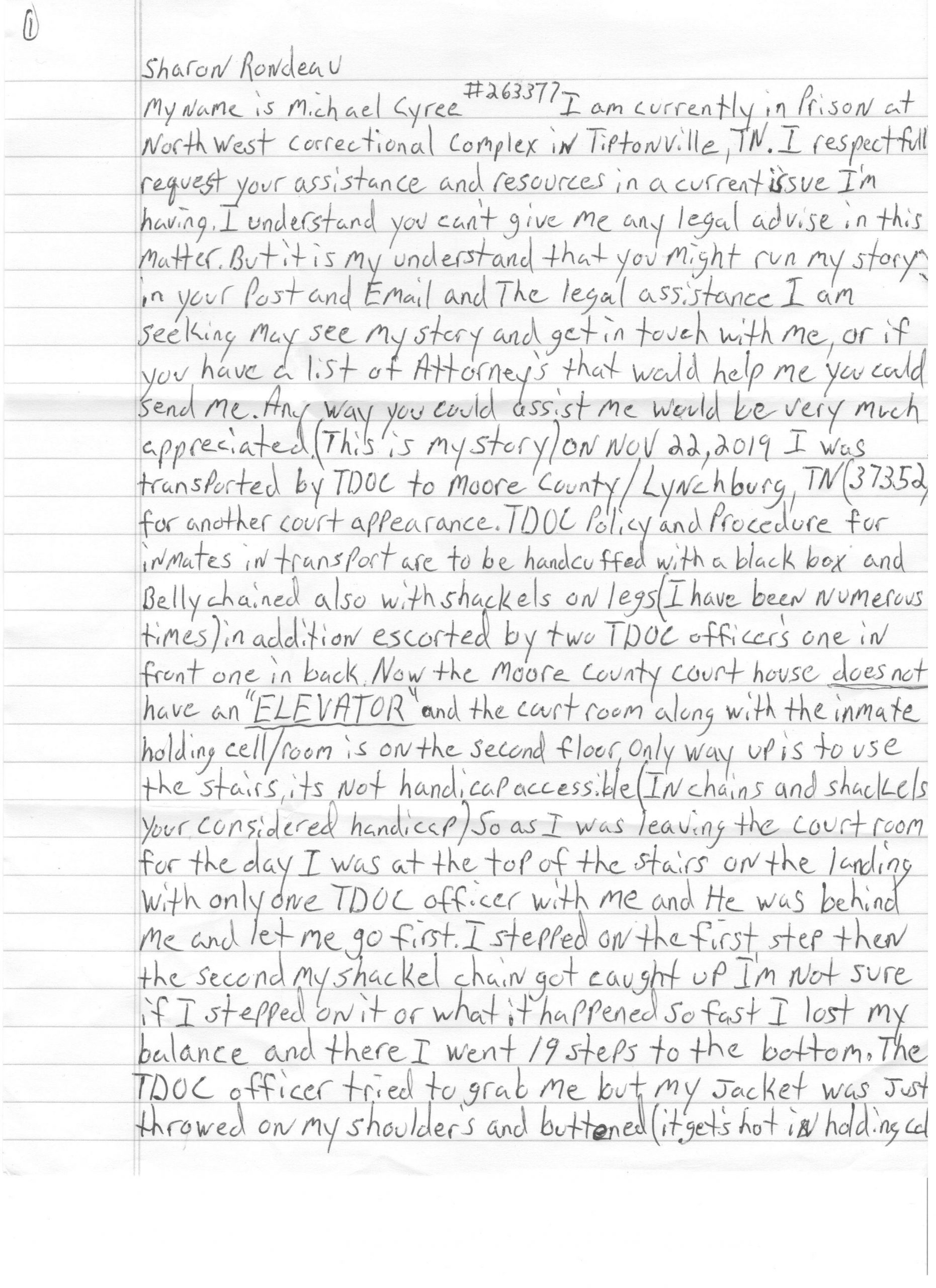 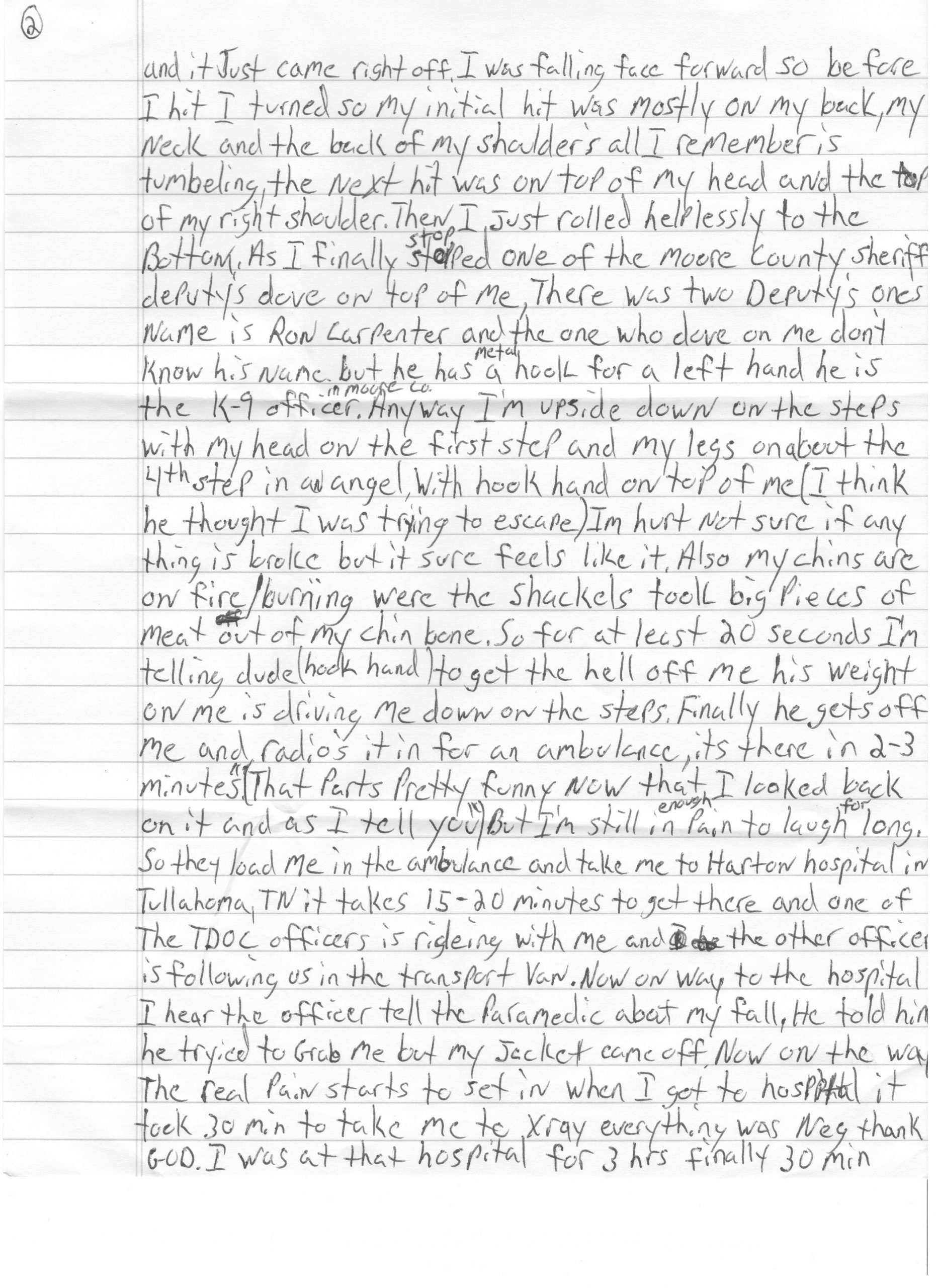 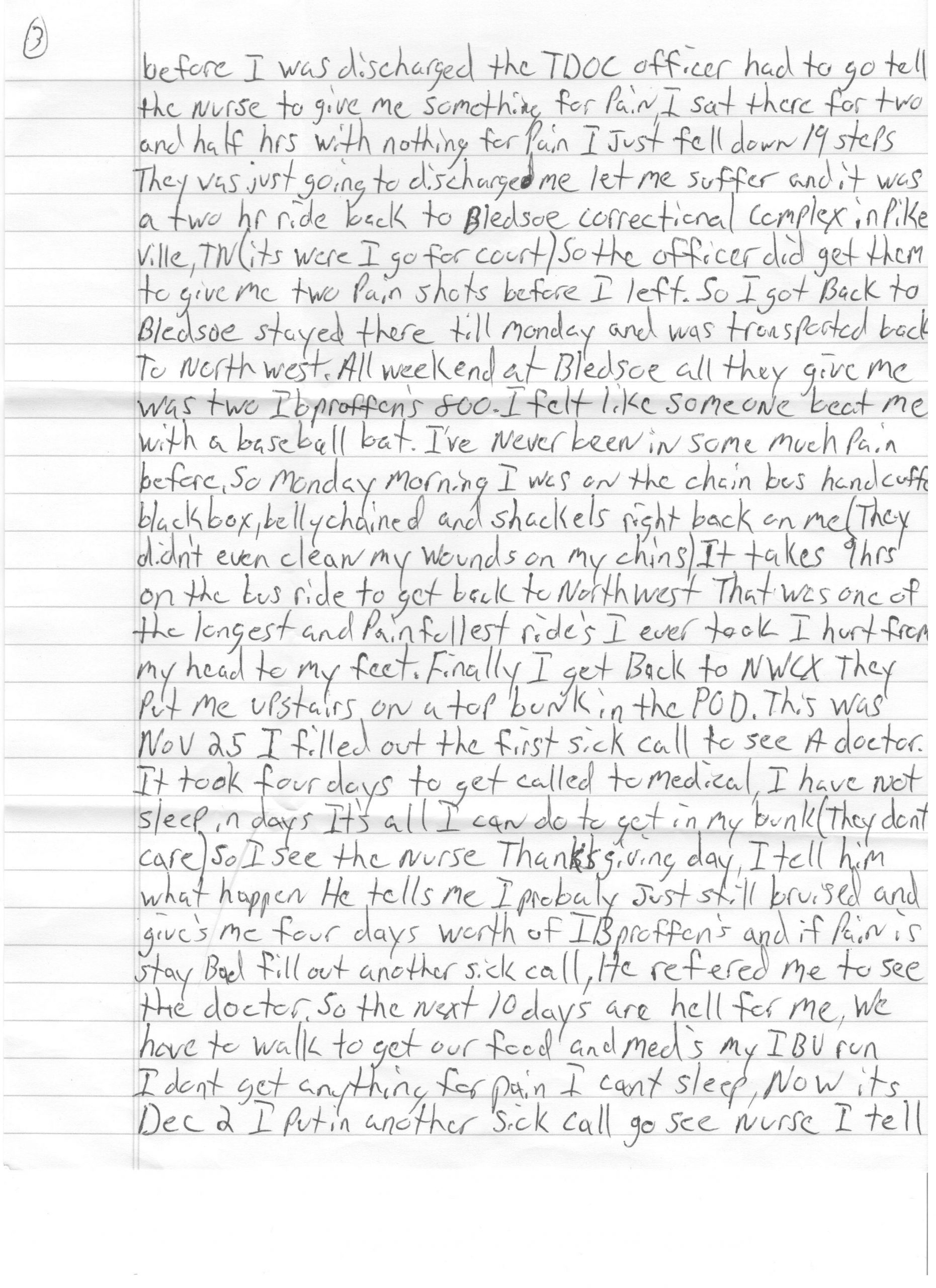 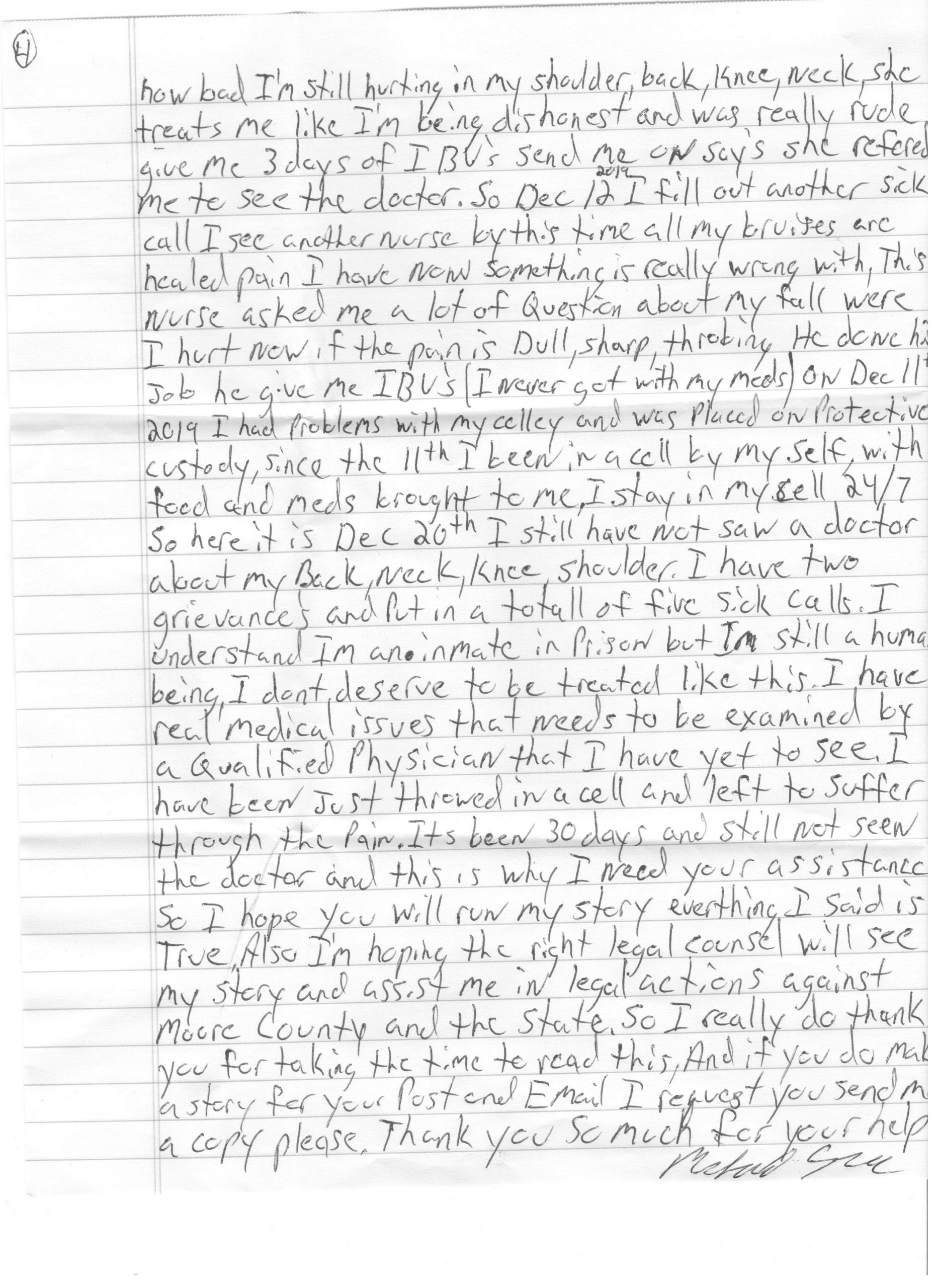 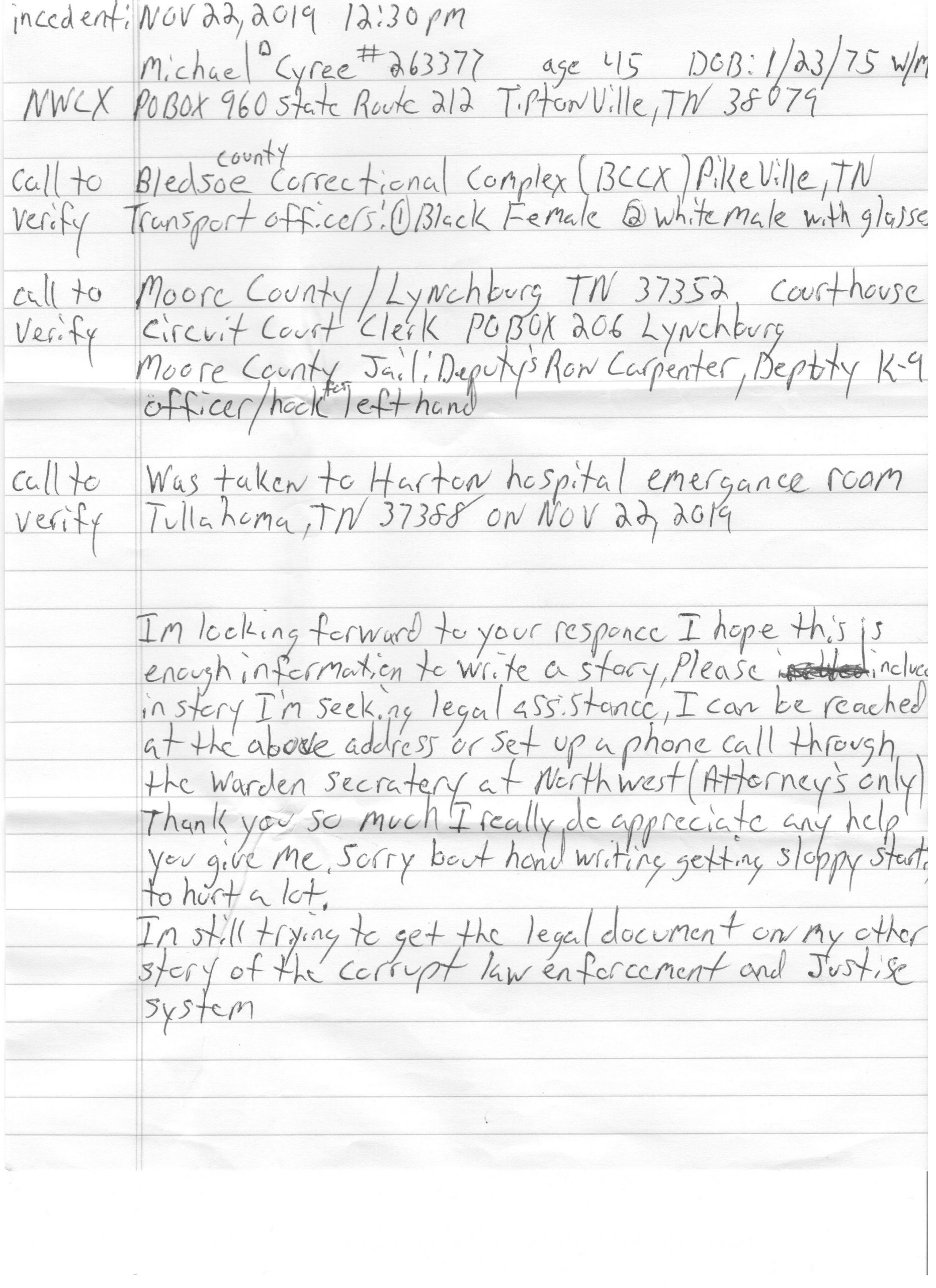