BUT WHEN WILL THEY BE FREED? 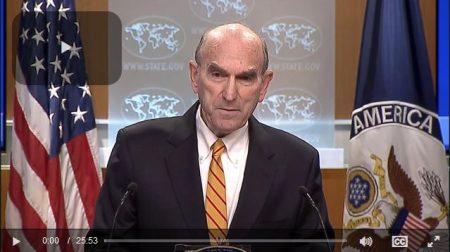 (Dec. 20, 2019) — On Friday morning, Special Representative for Venezuela Elliott Abrams confirmed in a press conference that an “improvement in conditions” has taken place for the “Citgo 6,” six former executives of the Venezuelan oil company based in Houston, TX.

The development was first reported by Reuters and the Houston Chronicle on December 9 and by KRIS-TV on December 10 as a move from imprisonment to “house arrest.”  The former Citgo executives are Gustavo Cardenas, Jose Pereira, Jorge Toledo, Tomeu Vadell, and brothers Jose Luis Zambrano and Alirio Zambrano.

In November 2017, the then-executives, all of whom were based in the United States, were summoned to attend a business meeting in Caracas, then accused of corruption by the Nicolas Maduro regime, denied due process and held in reportedly harsh conditions.

KRIS reported that two sources told the Associated Press that “the mens’ [sic] lawyers made the request to be granted house arrest due to health concerns.”  In its coverage of the story on December 12, CNN published photos of one of the men, reportedly “before his detention and in January 2019 in Caracas, Venezuela” showing a dramatic change in his appearance.

Five of the six are U.S. citizens, KRIS reported.

In July, Abrams reported that the men were “suffering serious health conditions and must be released immediately.”

On November 27, Abrams reported of the six at a presser, “The employees are scheduled to have a hearing next week on December 2nd, and the United States will be closely following that. This should not be another pro forma step. Seventeen hearings have been canceled to date. These six men face cumulative health problems given their lack of consistent access to food, sunlight, and exercise. Their detention should end.”

On Friday Abrams told reporters, “The recent improvement in conditions for the Citgo Six is progress, but it is not enough. The group has been waiting two years for trial in their case and has suffered continuous cancellations of hearings 18 times now. They should be fully released now to be reunited with their families for the holidays.”

In response to the questions: “Do you – are there any talks underway to get the Americans in prison there freed? And do you have anything to offer the Maduro government if they were to release the Americans?” Abrams said, “Well, they have been moved from prison, as you know, to house arrest. As the Secretary has said many times, we are constantly working on the freeing of every American who’s held anywhere. There have been a lot of progress in 2019. So we think about and work on the Citgo Six really all the time. As to what we would offer the regime, that’s a very dangerous road to go down, which is to say turning people into hostages and rewarding regimes that illegally detain American citizens.”

Since January 5, the U.S. government has recognized Juan Guaidó as the interim president of Venezuela and called for Maduro to step aside, a move to which Maduro has not acceded.

The U.S. and a dozen other countries view the May 2018 election after which Maduro claimed victory was “illegitimate,” while the governments of Russia, Cuba, China, Turkey, Bolivia and Iran, among others, declared their support for Maduro.  Bolivia has since denounced the Maduro regime amid its own political crisis.

On January 10, the BBC reported that “Since taking office Mr Maduro has been condemned at home and abroad for alleged human rights abuses and for his handling of the economy, which is in a state of near-collapse.”

Venezuela’s recent presidents, the late Hugo Chavez (1999-2013) and Nicolas Maduro (2013-2019), defined themselves in part through their opposition to the United States, regularly criticizing the U.S. government, its policies, and its relations with Latin America. Former President Maduro’s policies are marked by authoritarianism, intolerance for dissent, and violent and systematic repression of human rights and fundamental freedoms – including the use of torture, arbitrary detentions, extrajudicial killings, and the holding of more than 700 prisoners of conscience. The former Maduro regime’s irresponsible state intervention in the economy has facilitated widespread corruption and stoked hyperinflation leading to negative economic growth, as well as food, energy, and water shortages, in a country with the world’s largest proven oil reserves. The United States maintains diplomatic relations with Venezuela through interim President Juan Guaido and the democratically elected National Assembly.