“WHICH ROAD WILL YOU TAKE?” 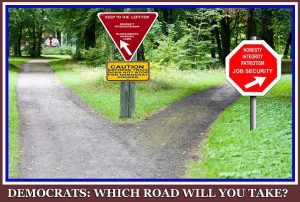 (Dec. 17, 2019) — Tomorrow, Wednesday, December 18, 2019 will be your day to show not just this country but yourselves that even if the Democrat Party has putrefied into an organization that exists solely for its elites, you have not.

Each and every one of you knows that the morons who have forced this impeachment fiasco on you do not give a wit about whether or not you lose your seat in 2020. While most of you are in “safe” districts which have been unconstitutionally gerrymandered, there are many who are not. This open letter is for you.

The DNC leadership is using you, just as they use and discard minority groups, the poor and the uneducated. They will sacrifice your seat in order to improve the odds at winning the Presidency.

Every Democrat who will be tasked with displaying honor to America or loyalty to a long deteriorating party must decide if giving Ms. Pelosi a presidential campaign issue equals in value to your political future.

So in that light, all of you need to ask yourselves two questions. In answering you can either be honest with yourselves or you can be obedient to a party that is willing to toss you under the coming express train. What they want is not what is good for the country or even you, but what they think is good for them. Everyone else be damned!

If you answer NO, aloud or under your breath to any of these questions, you should vote NO or at least abstain (vote present) in tomorrow’s national embarrassment.

Each of you can answer those questions any way your conscience allows. But what you do not have control over is how Donald Trump’s supporters would answer them. So remember, as the 2020 election nears and you voted to impeach our president, the train we spoke of above will be the Donald Trump Express.

Honesty, patriotism and integrity are the road signs to inner approbation and, oh, yeah, possibly holding your seat. If not, that yellow line on the express platform will become so blurred you just might get in the way of what’s coming.