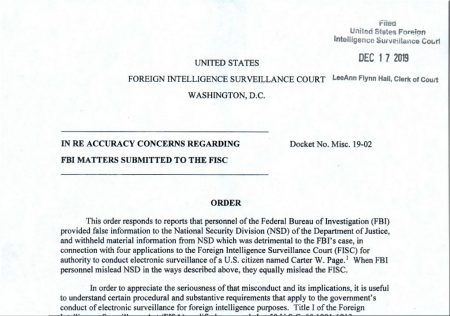 (Dec. 17, 2019) — In a rare written statement issued Tuesday, the chief judge of the Foreign Intelligence Surveillance Court (FISC), which received and approved four FBI applications to conduct surveillance on former Trump campaign adviser Carter Page, admonished the FBI for having “provided false information” to the Justice Department’s National Security Division (NSD) and ultimately, the court itself.

The NSD approved the applications to which FBI agents averred the contents were accurate, with then-FBI Director James Comey signing three of the four attesting to the claims made therein as “verified.”

In September 2016, according to page 10 of a DOJ Inspector General’s report released on December 9, the FBI began preparing the first of what would become four continuous “FISA” applications on Page, who they claimed was acting as “an agent of a foreign power,” namely, Russia.  The surveillance of Page’s communications presumably gave the FBI a window into some of the inner workings of the Trump campaign, and possibly the candidate’s conversations, during the final weeks of the 2016 election cycle.

U.S. intelligence officials are seeking to determine whether an American businessman identified by Donald Trump as one of his foreign policy advisers has opened up private communications with senior Russian officials — including talks about the possible lifting of economic sanctions if the Republican nominee becomes president, according to multiple sources who have been briefed on the issue.

The activities of Trump adviser Carter Page, who has extensive business interests in Russia, have been discussed with senior members of Congress during recent briefings about suspected efforts by Moscow to influence the presidential election, the sources said. After one of those briefings, Senate minority leader Harry Reid wrote FBI Director James Comey, citing reports of meetings between a Trump adviser (a reference to Page) and “high ranking sanctioned individuals” in Moscow over the summer as evidence of “significant and disturbing ties” between the Trump campaign and the Kremlin that needed to be investigated by the bureau.

Isikoff’s article was included with all four applications to the FISC, with FBI agents failing to verify whether or not Russia “dossier” compiler Christopher Steele, who was an FBI source until November 1, 2016, was the source for Isikoff’s reporting.

Steele was known by at least some in the U.S. intelligence community to bear an anti-Trump bias and by a official a State Department to have a political motivation for disseminating the now-infamous dossier whose contents have never been verified.

In a scathing four-page “Order,” FISC Presiding Judge Rosemary M. Collyer contended from the outset that the FBI’s misrepresentations and omissions constituted “misconduct” and was “antithetical to the heightened duty of candor” required by FISA-warrant applicants.  “The frequency with which representations made by FBI personnel turned out to be unsupported Or contradicted by information in the possession, and with which they withheld information detrimental to their case, calls into question whether information contained in other FBI applications is reliable,” Collyer wrote on page 3.

Page was never charged with a crime and is now reportedly exploring any legal options he might have against the government.

The FBI’s suspicions of “collusion” between members of the 2016 Trump campaign and the Kremlin gave rise to a 22-month follow-on investigation conducted by a former FBI director, Robert S. Mueller, III, who served as “Special Counsel” over 19 prosecutors, 40 FBI agents and support personnel between May 2017 and March of this year at an estimated cost to taxpayers of at least $32 million.

Mueller’s report found insufficient evidence of a Trump-Russia conspiracy to affect the outcome of the 2016 election or that any American, for that matter, attempted to coordinate with Russians.

Until Tuesday, many observers had wondered whether or not the FISC, or its overseer, U.S. Supreme Court Chief Justice John G. Roberts, would issue a public statement on the material omissions in the Page warrant applications.

Following her admonishment of the FBI’s actions, Collyer ordered the government, “in a sworn written submission of what it has done, and plans to do, to ensure that the statement of facts in each FBI application accurately and completely reflects information possessed by the FBI that is material to any issue presented by the application.”

“In the event that the FBI at the time of that submission is not yet able to perform any of the planned steps described in the submission, it shall also include (a) a proposed timetable for implementing such measures and (b) an explanation of why, in the government’ s view, the information in FBI applications submitted in the interim should be regarded as reliable,” Collyer added.

In her final paragraph, Collyer ordered that by Friday, “the government complete a declassification review” of a December 5 order the FISC issued in response to its having been informed that an FBI Office of General Counsel (OGC) attorney, as reported by Horowitz, altered an email to bolster the FBI’s case against Page.

Trump’s March 4, 2017 tweet claiming that his campaign was the subject of a “wire tap” was first met with derision and ridicule, particularly by members of the mainstream media.  He now claims that “Obama knew everything.” 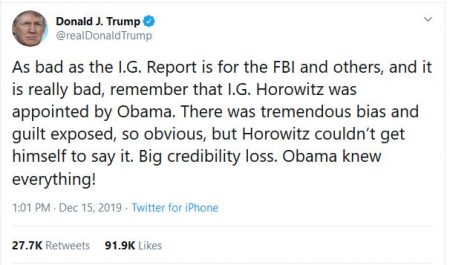 Reacting to Collyer’s order, Trump tweeted Tuesday evening, “Statement by the Court was long and tough.  Means my case was a SCAM!”