“WE DIDN’T GET THAT TRANSCRIPT” 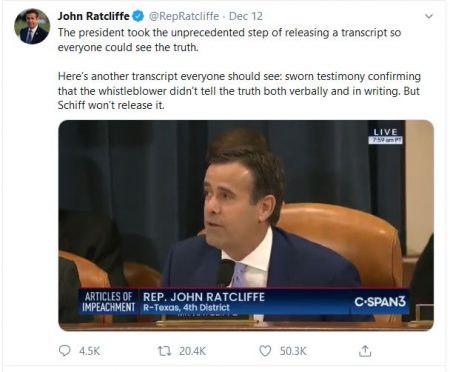 Ratcliffe’s comments came against the backdrop of what is expected to be a vote on Wednesday by the full U.S. House of Representatives on impeaching Trump with no Republican support and with Ratcliffe making the case that Schiff, who ran the “investigation” into Trump’s alleged wrongdoing, is untrustworthy.

The whistleblower complaint is dated August 12, 2019 and was directed to Schiff as chairman of the House Intelligence Committee and Sen. Richard Burr (R-NC), chair of the Senate Intelligence Committee.  Approximately six weeks later, following a public hearing chaired by Schiff in which Acting Director of National Intelligence Joseph Maguire testified as to why he delayed conveying the complaint to Congress, Speaker of the House Nancy Pelosi declared the opening of an “impeachment inquiry” which Schiff would spearhead.

Impeachment proceedings normally are led by the House Judiciary Committee, and in the cases of Presidents Nixon and Clinton, were preceded by investigations carried out by independent prosecutors and not members of Congress.

At a December 10 “Women’s Leadership Summit” sponsored by Politico, Pelosi said the “impeachment” effort has “been going on for 22 months, OK?  Two and a half years, actually” (5:15).

On Friday, two Articles of Impeachment were passed on a strict party-line vote out of the House Judiciary Committee for “obstruction of Congress” and “abuse of power.”

The claim among Democrats that Trump overwhelmed his Ukrainian counterpart during the July 25 phone call by pressuring him to open or reopen an investigation into former Vice President Joe Biden and his son, Hunter, followed a 22-month, $35 million investigation by former Special Counsel Robert Mueller based on the claim that members of the Trump 2016 campaign might have been coordinating with Russian operatives to affect the outcome of the U.S. presidential election.

Mueller’s report, made public in April, revealed that no such “collusion” was found. On the allegation of “obstruction of justice” against the president, a claim reportedly made by former FBI Deputy Director Andrew McCabe, Mueller’s team reached no conclusion.

Since winning the majority in the House in November 2018, Democrats have attempted to obtain eight years of Trump’s tax records from when he led the Trump Organization, thus far unsuccessfully. Last week, the U.S. Supreme Court announced it would take up the case and two others which are closely related, with a decision not expected until June of next year.

Ratcliffe told Bartiromo that it remains to be seen how many House Democrats “jump ship,” using the example of Rep. Jeff Van Drew (D-NJ2), who reportedly intends to switch parties next week as a result of his opposition to the impeachment effort. Drew and Rep. Collin Peterson had early on declared their opposition, absent additional evidence, to the impeachment efforts against Trump.

“…the Democrats have made the mistake of staking the credibility of all this on Adam Schiff,” Ratcliffe told Bartiromo. “The person that they’ve put in charge turns out is the one that helped start it by meeting with the person who walked out of Adam Schiff’s office and became the whistleblower, and at the very same time that that’s happening, as you mentioned, now there’s an inspector general report that comes out that says during the last impeachment hoax, the Trump-Russia one, Adam Schiff repeatedly made false statements to the American people about the FBI’s actions.”

Ratcliffe was first referring to the 480-page report released last Monday by Justice Department Inspector General Michael Horowitz which, although not naming Schiff, contradicted many of the statements Schiff, as the then-ranking member, made in a House Intelligence Committee Democrat-authored memo in February of last year.

The Democrat memo was issued in response to a Republican-authored memo by then-House Intelligence Committee Chairman Devin Nunes which claimed that in regard to the four FISA warrant applications on 2016 Trump campaign adviser Carter Page which are the focus of Horowitz’s report, “The government had at least four independent opportunities before the FISC to accurately provide an accounting of the relevant facts. However, our findings indicate that, as described below, material and relevant information was omitted.”

At the time, Schiff and committee Democrats had countered with, “FBI and DOJ officials did not ‘abuse’ the Foreign Intelligence Surveillance Act (FISA) process, omit material information, or subvert this vital tool to spy on the Trump campaign.”

The Horowitz report states that investigators determined that “factual assertions relied upon in the three Carter Page renewal applications were inaccurate, incomplete, or unsupported by appropriate documentation, based upon information in the FBl’s possession at the time the applications were filed” (p. 268).

Last Wednesday, Horowitz testified to the Senate Judiciary Committee that in January 2017, after at least one FISA application had been approved to conduct surveillance on Page, the FBI interviewed a sub-source of Russia “dossier” compiler Christopher Steele who cast doubt on the information Steele used regarding Trump and Russia was unverified and at times, speculative.  However, the FBI continued using Steele’s “election reporting” as the basis for the additional surveillance warrants which Horowitz reported collected Page’s communications through late August 2017. “As described in Chapters Six and Eight, during his/her January 2017 interview with the FBI, the Primary Sub-source made statements that were inconsistent with multiple sections of the Steele reports, including the allegations relied upon in the FISA applications. These inconsistencies should have resulted in serious discussions about the reliability of Steele’s reporting-particularly to support a probable cause showing in a court filing-but did not,” the report states on page 370.

In early October, it was reported that the whistleblower, when asked on the official form he or she completed to file the complaint, did not disclose the contact with Schiff’s office.  Some have pointed out that the “urgent concern” the whistleblower described in the complaint does not cite alleged wrongdoing against a member of the intelligence community, but rather, the President of the United States, a factor which Maguire testified prompted him to consult with the Justice Department before taking other action.

Maguire and Intelligence Committee Inspector General Michael Atkinson reportedly did not agree as to whether or not the complaint constituted an “urgent concern” about a member of the intelligence community.

Ratcliffe has been particularly vocal in regard to Schiff’s refusal to release the transcript from Atkinson’s October 4 closed-door testimony despite releasing approximately a dozen other transcripts from the same time frame.  During a House Judiciary Committee impeachment hearing on Thursday, Ratcliffe said that Schiff “got caught not being truthful about a whistleblower who, as I told you the other day, didn’t tell the truth verbally and in writing, and that’s in a transcript. You know what we didn’t get in this one-week impeachment summary in the House Judiciary Committee?  We didn’t get that transcript. Chairman Schiff didn’t send that one over.  Only if you’re on the Intelligence Committee have you seen that transcript.  I’ve seen it; I’d like everyone to see it.”